There are many good knocks going against Judd Apatow – enough that a vibrant cottage industry of essays and analysis springs up every time the director releases a new film.

There is the charge that his movies are too long (his shortest, Knocked Up, clocks in at 128 minutes; his longest, Funny People, runs 153). That his improv-heavy style substitutes lazy penis jokes for thoughtful wit. That he fundamentally misunderstands women. That he has made the same film his entire career: Cast a rising but unconventional comic star as the lead, give them a murderer’s row worth of scene-stealing sidekicks, show personal growth through gainful employment and the development of a romantic relationship.

The King of Staten Island, Apatow’s latest film after a five-year absence from moviemaking, isn’t going to quell any of those complaints. It is longer than necessary, filled with tee-hee sex jokes and slots in Saturday Night Live star/social-media obsession Pete Davidson in the Steve Carell/Seth Rogen/Amy Schumer role. But, mostly, it works. The characters are compelling, the sense of place conjured genuine, the performances charming. And unless you are made of stone – to say nothing of being actually stoned – it is pretty damn funny. For at least 100 of its 137 minutes.

Sharing screenwriting duties, Apatow benefits greatly here from the contributions of co-writers, and one-time SNL colleagues, Davidson and Dave Sirus. Like the Schumer-penned Trainwreck – Apatow’s only film that he didn’t have a credited hand in writing – there is a distinct sense here that we’re not just reliving Judd Apatow: This Is Your Life on repeat. Pitched as a lost-in-the-suburbs tale of arrested development that mirrors Davidson’s own family and mental-health struggles, there is an itchy, nervous scratch to The King of Staten Island’s skin.

Apatow is more curious and interrogative about his characters this time around, perhaps because he doesn’t recognize himself in any of them. Unlike The 40-Year-Old Virgin’s sweet-guy shlub, Knocked Up’s hapless father-to-be, Funny People’s aspiring stand-up comedian or This Is 40′s sexually and professionally frustrated father, Apatow’s latest hero is less familiar and less sympathetic, and thus a shade more complicated.

Davidson’s twentysomething ne’er-do-well Scott is introduced as being thick in the fog of grief and high anxiety, and something of a dangerous jerk to everyone around him. Still mourning the death of his hero firefighter father (a direct echo of Davidson’s own early-childhood family loss), Scott refuses to commit to his friend-with-benefits Kelsey (Bel Powley), avoids bonding with his college-bound sister Claire (Maude Apatow; yes, Judd’s daughter), and refuses to listen to his nurse mother Margie (Marisa Tomei) as she pleads with him to get a life already. His only stable relationship is with his drug-dealing scumbag friends – although this being Apatowland, these scumbags are still of the sweetest variety – and his only comfort is getting tremendously, ridiculously high.

Soon enough, change rushes into Scott’s life in the form of well-trod Apatow plot tics – a job and a relationship, although the latter is an external force, as Margie starts dating brash firefighter Ray (Bill Burr), who sees through most of Scott’s excuses. But whereas previous Apatow films found easy, accepting comedy out of a man-boy’s gradual evolution into a boy-man, The King of Staten Island stretches Scott’s life into different, messier directions. Things just don’t snap into place as they did in previous films, and there’s a distinct lack of empathy for Scott’s self-made plights.

Apatow still can’t quite escape his lack of imagination when it comes to his female characters, though. While sexism has always been the trickiest charge to pin on the filmmaker – one who’s enjoyed true collaborations with the likes of Schumer, Lena Dunham (Apatow wrote 10 episodes of HBO’s Girls), and Kristen Wiig and Annie Mumolo (Bridesmaids) – it’s not imagined, either. While neither Scott’s sister nor mother descend into shrill territory, Powley’s character is given so little to do and so little depth that she threatens to fly away in the Staten Island breeze. More disappointing is that Scott’s ultimate redemption hangs solely on her shoulders.

Still, Powley and everyone else in the cast are absolutely emptying themselves on-screen. And though it might seem silly to bleed yourself dry for a Judd Apatow comedy, the commitment works tremendously well. This is a film that decides to sneak in Steve Buscemi just because it can – and still remains so stacked with talent that the legendary character actor registers only the sixth- or seventh-best performance in the film.

Davidson, who is so used to being treated as a tabloid punchline for his many flash-bright romantic relationships and real-life breakdowns, nails almost every moment, and deserves just as much stardom as Apatow previously bestowed on Carell and the like.

Don’t mistake all of this for some huge leap in cinematic growth on Apatow’s part; he is still very much in familiar territory. But it is thoroughly entertaining, sincerely felt territory all the same. I’ll allow his reign to continue – though someone might want to tell His Royal Highness to keep it to 120 minutes next time. 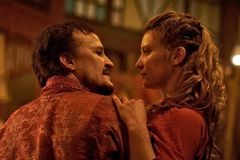