Leonard Cohen references in the movies of Matthew Bissonnette are not unusual. In 2009′s Passenger Side, the song Suzanne plays during a drive along California’s Pacific Coast Highway. In Bissonnette’s debut feature, a character reads the Cohen novel Beautiful Losers. That film is called Looking for Leonard.

Cohen music isn’t hard to find in Bissonnette’s fourth and latest, Death of a Ladies’ Man, out Friday. Seven songs from the late troubadour dominate the soundtrack. The Montreal-born writer-director spoke to The Globe and Mail from his home in Los Angeles.

How in the world can you afford the rights to all the Cohen music in this film?

They’re not free, but Leonard Cohen’s team definitely gives us a hometown discount. We couldn’t afford these songs on the open market.

By hometown discount you mean that you have a history of working with Cohen, when he was alive, and with his manager Robert Kory?

Yes. My first movie was called Looking for Leonard, which had some Cohen footage in it. Leonard saw the film and kind of liked it. Any subsequent film of mine which used a song of his or referenced his work, we always sent him a note to let him know. Leonard thought it was funny that we kept on doing it.

Was he alive when this film was conceived?

He was still alive when I sent him the screenplay. I sent him a letter saying, “Hello Mr. Cohen, it’s me again. I’ve lifted the title of one of your songs and I’d like to use seven of your songs in my film, if you don’t mind.” He got back to us through Robert Kory. They were okay with it. With them on board, it becomes very easy.

Sony Music Publishing owns the publishing rights to the songs. Presumably they’re on board as well?

Robert Kory talks to Sony and tells them to help us out. It was only through his and Leonard’s generosity and good humour that we were able to do this film. They’re real gentlemen to work with.

Do you think using the music in an interpretive way rather than a documentative way is what appeals to the Cohen team?

I wouldn’t know. I can’t speak to their thinking. But that’s the way we’ve always related to his work. I don’t know Leonard. I’m relating to what he put out into the world. I’m interested in the same things he was interested in.

Fantasy versus reality and desire versus responsibility.

Your lead actor is Gabriel Byrne. What’s his relationship with Cohen’s music, if any?

After he read the script, we met in New York and had lunch. In our conversation, the Cohen angle would come up. But it was just one angle. The primary interest was the main character and certain ideas of loss and childhood and addiction and conflict between a romantic construct and the actual way the world works, and the consequences of that.

This isn’t a musical, but the Cohen songs are more than background. What’s the purpose of his music?

I think the songs are actually a character. That’s how our team approached it. These songs are a character, and I was interested in having visuals to go along with those songs. Music is so much more about spirit and tone and feeling, than actual narrative. Even a song with a narrative was really conveying a feeling underneath the story.

The film has some fun with the city of Hamilton, with a hockey team named the Hamilton Factories. Do you think the city will be happy with its portrayal?

I hope so. Hamilton has a working-class heritage to it. I don’t mean to disparage Hamilton in any kind of way. I just thought it was funny to call the team the Hamilton Factories.

It is funny. But what about Byrne’s character sarcastically referring to beautiful downtown Hamilton?

Sarcastic? I guess so. But I hope the film is sarcastic about many things. Perhaps Hamilton is one of them.

This interview had been condensed and edited. 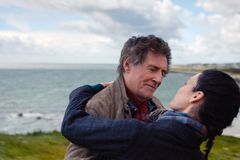