Written by Phil Graziadei and Leigh Janiak, based on the book series by R.L. Stine

Reviewing a trilogy is easy … once you’ve seen all three films. But analyzing movies made back to back to back with the explicit goal of acting as one large epic, with only access to the first entry is a trickier, probably futile exercise. Such is the challenge that greets critics, and audiences, who venture down Fear Street, Netflix’s big bloody summer bet. Starting this Friday, subscribers will be able to watch the series’ first entry, Part 1: 1994, before the filmmakers time-travel back to 1978 for Part 2 on July 9 and 1666 for Part 3 the week after that.

If I had a gun to my head (or really a butcher knife to better reflect the proceedings), I’d cautiously recommend Fear Street for a certain breed of undemanding slasher fan. Judging by the first entry, director Leigh Janiak has spent a good deal of time studying old VHS tapes filled with terrified teenagers, unstoppable madmen and enough gnarly kills to fill a year’s worth of Fangoria magazines. There’s even one murder here involving a bread slicer that might have sparked a genuine moral panic were today’s audiences not so desensitized to such gore.

But while Janiak is able to easily tick off the hallmarks of the genre, and perhaps convince those actually alive in the nineties that the entire decade must have been backlit in aggressive neon, her film doesn’t quite scream (or Scream) out for two more films’ worth of context.

Loosely based on R.L. Stine’s series of books for young readers who had outgrown his YA Goosebumps series, Fear Street focuses on Shadyside, an all-American town that’s been plagued by all manner of murder over the centuries. Serial killers, psychopaths, maybe even a few witches. You know the drill.

Opening just two years before director Wes Craven would rework the slasher genre with Scream, Janiak’s film focuses on a handful of clever teens who, when faced with a string of slayings, decide to take matters into their own hands and end Shadyside’s cycle of violence forever.

From the film’s opening scene – which employs a famous Stranger Things star as its very own version of Scream’s Drew Barrymore – it becomes clear that Janiak knows exactly who her audience is and what expectations they’ve brought with them. I just, um, fear that given Part 1′s sluggish second half and so-so story (it says a lot that Part 1 feels the need to include not one, not two, but three killers to justify its stakes), that there won’t be much more to parts two and three than homages to horrors past.

But given that theatres are still closed in Ontario and I find myself increasingly brain-drained come evening, I’m willing to walk down Janiak’s path. Even if Fear Street ends up becoming a dead end. 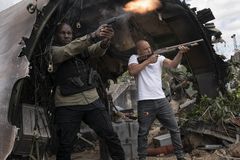 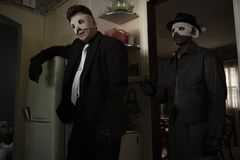 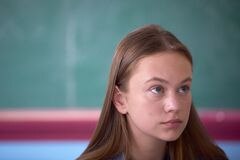