If HBO’s Spanish-language horror-comedy Los Espookys were available in Canada, I’d be able to tell you how well it balances the eerie and the entertaining, the familiar and the supposedly “foreign.” I’d also be able to tell you how Fernando Frias, who directed all six episodes of the series’ first season, brings such a unique vision to the proceedings – the filmmaker has a patient kind of curiosity, which results in a visual humour all his own. But because Los Espookys is not part of Canadian streamer Crave’s deal to house HBO content, I can’t tell you any of that.

What I can say is that Frias’ new film, I’m No Longer Here, will be available on Canadian Netflix starting this Friday. And it is just as intriguing as his illegal-in-Canada HBO work.

Using the framework of an immigration tale to explore itchier truths about identity, culture and the pressure to conform, I’m No Longer Here follows the plight of Ulises (Juan Daniel Garcia Trevino), a teenager in the Mexican mountain town of Monterrey who loves two things: his low-level, mostly harmless gang, and dancing to the ultra-slow beats of cumbia music, a genre which comes with its own specific fashion and hairstyles. After getting mixed up in a cartel war, though, Ulises must flee to New York, where he finds his sense of self slowly eroded.

Switching between Ulises’s present-day existence on the fringes of New York’s under-the-table economy and flashbacks to his slightly more stable life in Monterrey, Frias effectively evokes on-screen the tension tearing his protagonist apart – he longs for home, but knows that any return will only resurrect the troubles that forced him to flee in the first place. And the more we know of Monterrey and its political situation, the more we begin to cling to Ulises as a character. To genuinely help him, to protect him.

Frias is as clearly intoxicated with Ulises as he is cumbia, frequently stopping the film’s action in its tracks to admire both Trevino’s moves and the music’s rhythms (which one character likens to what happens when a song is played on a phone with low-battery power). In less inquisitive hands, such detours could have felt unnecessary. Here, they feel essential.

Still, there is a semi-frustrating sense that Frias hasn’t quite made the movie that he wanted to – that either time was not on his side or that he fussed too much in the editing booth. The New York segments seem oddly clipped, filmed with less energy and emotion than the Monterrey sequences (though that might be a deliberate reflection of Ulisess’ own lack of enthusiasm for his new home). There are points, too, where it seems that Trevino’s performance can be attributed almost entirely to those who costumed and styled him.

But until Los Espookys arrives in Canada, I’m No Longer Here stands as a welcome introduction to the many talents and passions of Fernando Frias.

Film Review
Netflix’s The Lovebirds doesn’t quite portend the death of the big-screen comedy, though it doesn’t help, either
Subscriber content
May 20, 2020 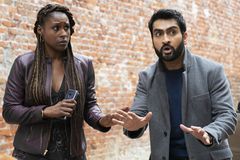