It is easy to read the Toy Story films as paeans to the power of imagination, or love letters to the pure innocence of childhood. But the films are also consistently unnerving meditations on life’s big questions, with a notable fixation on finality. Woody and Buzz’s adventures have been focused on expiration since the very beginning. Forky, the piece of multi-use plastic cutlery who is christened early on in Toy Story 4, simply brings the series’ anxieties to the fore with a more furious, determined energy than ever before. As Barry Hertz writes, Sheriff Woody, Buzz Lightyear, Mr. and Mrs. Potato Head, Slinky Dog and the rest of the CGI gang are all back in this new installment of a series that has lasted far longer, and resonated more deeply, than anyone could have anticipated a quarter-century ago. (Opens June 21)

The fact that 2019’s remount of Child’s Play is opening the same week as Toy Story 4 isn’t an accident – they’d actually make an excellent double bill. Pixar once taught us how to empathize with everything from Mr. Potato Head to lamps, and the newest Chucky has only taken it further. Is a psychopathic doll scarier if you relate to his emotional baggage, or do smarter films actually make for lower box-office returns? While Child Play’s is definitely new-and-improved, I’m not sure if audiences are ready for layered, psychological Chucky. (Opens June 21)

Wild Rose is a film that gives birth to a brand new star named Jessie Buckley, and she absolutely deserves all of your undivided, not-remotely-built-for-plus-30-C attention. Buckley’s personal journey toward Wild Rose is a compelling one itself, with the Irish actress making a name for herself on BBC’s I’d Do Anything talent contest. Here, she’s Rose-Lynn, a charismatic ne’er-do-well who longs to grace the stages of Nashville, and she has the knock-em-dead voice to actually maybe kinda possibly get her there. The only problem: She’s a single mother to two young kids. And she can’t afford a way out of the country music-averse Glasgow. And she’s a drunk. Oh, and she just got out of prison for drug trafficking. (Opens June 21 in Toronto before expanding to other Canadian cities on July 5)

In a decaying Italian seaside town where Dogman is set, Marcello (Marcello Fonte) is a gentle dog groomer better at taming his animal clients than the criminal elements who surround him. He makes a bit extra on the side dealing drugs, and his most enthusiastic client is the vicious cokehead Simoncino (Edoardo Pesce), who bullies him into various ill-advised schemes. Early scenes show delicious whimsy and black comedy, but as the film’s numbing brutality takes hold, the character’s passivity makes the action drag in places. (Opens June 21 in Toronto and Montreal)

In the first few minutes of this service-dog documentary, you might wonder why your heartstrings aren’t constantly being pulled, why you’re not immediately weeping, as the film depicts six portraits of humans with special needs and the dogs who brighten their lives. In resisting the urge to roll over into the sappy dog-film genre, Buddy instead elevates the stories it tells: it’s ultimately about love, resilience and lessons we can all take in. (Opens June 21 at the Ted Rogers Hot Docs Cinema in Toronto)

Fredrik Gertten’s atmospheric, lushly shot documentary Push follows Leilani Farha, an Ottawa-based lawyer who is the United Nations special rapporteur on adequate housing. She is earnest, empathetic and dogged as she goes around the world chasing answers to the question of why cities have become so expensive. From Valparaiso to London, New York to the Toronto neighbourhood of Parkdale, she seeks a common thread: What is squeezing out Toronto apartment tenants and killing the residents of Grenfell Tower in London? Big capital. As Alex Bozikovic writes, Push focuses heavily on Wall Street and Bay Street villains, and ignores another: the NIMBY. (Opened June 19 in Toronto)

The Extraordinary Journey of the Fakir

There’s a fine line between slumdog and millionaire, says the eager, cute but unconvincing fable-comedy The Extraordinary Journey of the Fakir, and that line is determined by the “tyranny of chance.” An exercise in naive commentary and globe-trotting magical realism, the film dares viewers to take it seriously. As we watch Aja, a pick-pocketing Mumbai street magician, float in a hot-air balloon, we wonder where the thing is going to land. Which serves as a better metaphor about the film than any intended allegory in it. (Opens across Canada June 21)

When it comes to international spy films, do you think Luc Besson knows his Atomic Blondes from his Red Sparrows? You bet your assets he does. Which is why it’s a surprise that the French writer/producer/director of Nikita fame would turn in Anna, a near-parody non-thriller set in the Cold War eighties. Anna relies on a time-shifting structure that is laughably exhausting and Luss’s uncompelling character elicits no empathy – except when she cries to be free. (Opens June 21)

Film Review
Films opening this weekend: The soaring Rocketman and searing Colten Boushie doc nipawistamasowin: We Will Stand Up
Subscriber content
May 31, 2019 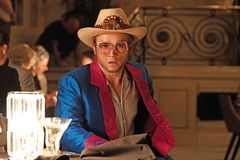 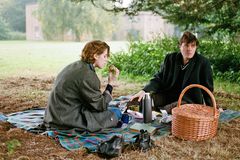 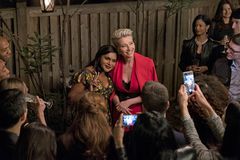