New Order will make you sick. And depending on your read of Michel Franco’s new film, that revulsion will either feel unnecessarily cruel or distressingly essential.

After three viewings – the first back in the fall of 2020, when much of Franco’s society-on-the-edge tale felt half an inch away from reality – I’m leaning toward the latter. New Order might go down as the most uncomfortable watch of the year. Sadistic and ugly and crushingly depressing. But also demanding of your engagement. The reward? A master-class in high-anxiety cinema, and enough fodder for a thousand uncomfortable conversations.

On the day of her wedding, the twentysomething Marianne (Naian Gonzalez Norvind), daughter of one of Mexico City’s power brokers, finds her lavish ceremony upended by a violent class uprising. On one side are the moneyed friends of Marianne’s father, who think nothing of bossing around the hired help and indulging in the finest food, wine and drugs that the country has to offer. On the other side is a curiously shapeless mob of protesters who begin to flood the streets with green paint and, eventually, blood.

A crass elevator pitch would be Parasite meets The Purge. But that would be unfair to all the filmmakers involved. Franco has no interest in, say, Bong Joon-ho’s sense of humour or narrative patience. And while The Purge films operate with a bargain-basement kind of style – the furthest you could possibly get from Franco’s petulant highbrow aesthetic – that ongoing American franchise at least pivots around a handful of characters worth investing your time in. Franco’s dystopia, meanwhile, treats absolutely everyone as meat for the grinder.

That is a crushing world view, sure. But there is an unquestionable artistry and mastery of the cinematic form pushing that perspective, too. Like the Guernica-by-way-of-Pollock painting hanging in Marianne’s home which Franco chooses as New Order’s opening image, there is an electric and dangerous energy to this film that is impossible to ignore.

When New Order made the festival rounds last fall, much criticism centred not on its brutal and degrading violence – though there was some of that, too – but on Franco’s extremely debatable positioning of class and race. The developers and politicians populating Marianne’s wedding are uniformly lighter-skinned Mexicans who would never think of fighting back. The uprisers, meanwhile, are the darker-skinned underclass with savage appetites. One of Marianne’s maids cackles as she raids her former employers’ jewellery stash. The family’s head of security all too quickly flips to murder. Bodies pile up, of all age. Franco makes it very easy to view his politics as reactionary, racist, deplorable.

But I think this is, ultimately, a deliberately aggressive tactic to egg on audience anger and disgust. Which must be then recalibrated on a dime as Franco peels back the machinations of the uprising to reveal the real force that benefits from the chaos: the fascist military state. Once the green and red is washed away from Mexico’s streets – even Franco’s colour scheme is not subtle – it becomes clear that the filmmaker is neither vilifying the country’s working class nor letting its elite off the hook.

New Order’s message might be obvious: there is always another level of power operating above the one that you think is pushing things along. But it is one worth engaging with, rather than dismissing. 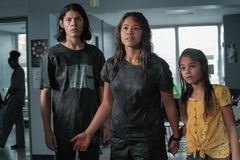 Film Review
Lin-Manuel Miranda’s In the Heights will get you dancing, and you might not ever be able to stop
June 7, 2021 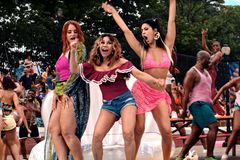 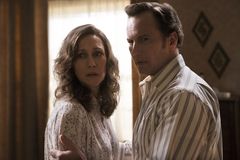