With Nose to Tail, Canadian character actor Aaron Abrams (Hannibal, The Go-Getters) goes the whole hog, playing an emotionally repressed chef with severe anger management problems. You see Abrams’s physical commitment to being a jerk early on, as he carelessly butchers an expensive mangalitsa pig (known as the Kobe beef of pork) by slapping it roughly down on the countertop, only to drunkenly lop off the pig’s hind quarter.

A decade, hell even five years ago, this sort of bruising character study of a tortured male gourmand could be painted as brave, even necessary. We’ve seen it before in the cooking dramas of Chef and Burnt; every time Gordon Ramsay tore a strip off someone for a fallen soufflé on Hell’s Kitchen; in the memoirs penned by the late Anthony Bourdain. Audiences have also invested hours of emotional energy into the broken male anti-heroes of cable, hoping Don Draper, Tony Soprano and Walter White will one day change for the better, while the brilliant Netflix series BoJack Horseman questioned why we need these archetypes to exist in the first place and if there will ever be a way for an indulged male artist to see the women they’ve hurt as actual people.

A new Canadian microbudget film, Nose to Tail tells the story of Daniel, an alcoholic Toronto restaurateur operating in a sub-basement on College Street who wakes up still drunk the next morning. He spends his ensuing 24 hours fighting with everyone who doesn’t cater to his whims: The sous-chef leaving him for another restaurant, the landlord he owes months of back rent to, the hostess/casual sex partner he refuses to call a girlfriend, the ex-wife with an improbable Parisian accent who wants him to spend more time with his leeeetle enfant (this scene is embarrassing), the hipsters running a rival food truck across the street, the blogger who wrote a takedown of his restaurant and demands his respect and finally, the prospective business partner who could save his failing restaurant. His talent for pairing a sous vide pork belly with an apple-cider gastrique (a bit pedestrian, really) aside, Daniel has no redeeming qualities, other than the roguish charm created by Abrams’s cool wriggly eyebrows. His colleagues bellow “Yes chef!” as he breaks a few plates and berates them. He’s the kind of charmer who demands some on-the-spot fellatio from a female colleague during a kitchen service. She laughs in his face and walks away, but still.

I’ve probably spent my entire life feeling sorry for men who claim not to have any access to their real emotions, and I’d like to stop buying a ticket for the privilege of doing this on screen. While writer-director Jesse Zigelstein paints an entertaining portrait of a man white-knuckling his way through a toxic-masculinity crisis – and Abrams is truly great – the movie’s slim 82-minute running time and limp antagonism from any supporting character who dares to challenge Daniel dilutes the story’s power.

Stuck in a thankless role as the voice of reason, Lara Jean Chorostecki (the aforementioned hostess/non-girlfriend) should be a proper foil. The movie could have bumped up its running time by giving her a character as flawed and interesting as Daniel’s. Instead, she oscillates between scolding and indulging her clearly damaged paramour; deflecting his advances, while wanting to know why he’d rather pass out on a countertop than spend the night at her place. (Girl, run: A bull would collapse from all these red flags!)

There’s something inherently American about Nose to Tail’s machismo, which takes a page from the kinds of movies made by Martin Scorsese. In the Canadian media landscape, our conflict usually tends to manifest when a successful Torontonian returns to their Newfoundland fishing village to ask their estranged siblings if “they’ve talked to mum lately.” We don’t break plates in restaurants, we passive aggressively sip from a lukewarm can of Pilsner in front of an idling Zamboni. I’d like to see more Canadian movies about wild, willful people who suffer the consequences of their own insane narcissism, but I wish this one had higher stakes, a la Uncut Gems. Nose to Tail is more like Poorly Diced Carrots.

Nose to Tail opens in Toronto, Calgary, and Winnipeg on February 14.

Film Review
‘Dark comedy’ Downhill is a cautionary tale of what happens when you remake an original film
February 14, 2020 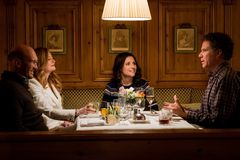