Gretel & Hansel, a new remake of Hansel and Gretel (the title is backward as to bring its female protagonist to the foreground), begins with Gretel, played by a wonderfully subtle Sophia Lillis of the It franchise, pounding the pavement looking for work.

She and her younger brother, Hansel, have just been ousted from their home by their insane mother, who threatens to hack them into tiny little pieces if they stick around. So Gretel accepts a job interview with a perverse old man who needs a housekeeper. Leering at the teenage girl, he inquires if “her maidenhood is intact.”

This is the catalyst that ends up throwing two homeless children into the arms of an evil witch who wants to eat them for dinner. After what they’ve been through to just get that far, she’s honestly the nicest person in the movie.

The reverberations of trauma, and how women can come into their power in a world designed to cauterize their hearts, are the engines that drive this surprisingly feminist take on a disturbing fairy tale, penned by first-time feature writer Rob Hayes.

Although it’s far too common these days for struggling male screenwriters to tack on a female psychology to well-trod IP in exchange for a green light from producers, everything about Gretel & Hansel is weirder, smarter and way more cinematic than I’d expected, thanks to some fascinating movie choices made by director Oz Perkins.

A stone-cold weirdo who started acting first (he has a memorable bit role in Legally Blonde), Perkins is the son of the legendary actor Anthony Perkins and he makes the kinds of films I imagine Norman Bates would stream on Netflix. His last two sinister tales, The Blackcoat’s Daughter and I Am the Pretty Thing That Lives in the House, created memorably tense environments in which young women unravel at the hands of supernatural brutality.

With Gretel, Perkins doesn’t provide the audience with bread crumbs (proverbial, or otherwise) in his undertaking of a well-loved fable. All his choices are the work of an auteur, doing whatever he wants. There’s no gingerbread house here, just a stern neon-lit cabin in the woods.

The witch looks like a lady you’d meet at an Amish sewing circle. There’s a trippy drug sequence in the forest where the two starving children accidentally ingest magic mushrooms, and a heartbreaking encounter with a young priest that’s something out of First Reformed. Once they meet the witch (played by Star Trek’s Alice Krige, skilfully handling her tricky scenes without ever overplaying them), the movie evolves in a tense, theatrical three-hander.

As Gretel, our new psychologically plausible female heroine, Lillis offers a master-class in restraint. Perkins lives to sculpt the proud jut of her jaw with Barry Lyndon candlelight. She holds back and she listens, even when she wants to cry, as intense interactions with the witch turn into dreams within dreams within dreams (Gretel & Hansel is also kind of like Inception) that reveals the true nature of both women’s personal pain.

Perkins’s rich cinematic mind imbues seemingly banal objects with horror as Gretel pieces together why this strange, older woman won’t stop plying her and her brother with gourmet meals.

We all know the horrifying revelation of Hansel and Gretel, but even my cynical screenwriter’s brain admits that foregrounding the tale as Gretel’s coming-of-age story makes it relevant again. Everything about this high-concept movie feels like a male screenwriter’s third-best idea at a Hollywood pitch meeting; I can’t believe all the ways Perkins elevates it into art.

Gretel & Hansel opens on Jan. 31 in Toronto, Edmonton and Calgary. 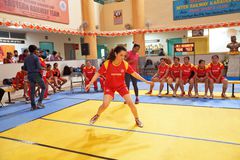 Film Review
Arriving in theatres this weekend: The Gentlemen, Color out of Space and The Last Full Measure
January 24, 2020 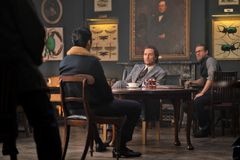 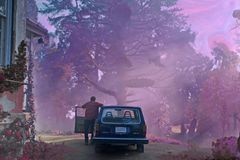