So: Paw Patrol: The Movie is … fine. On a scale of one to 10 pups (I realize that we’ve dealt away with stars here at The Globe and Mail, but forgive me this one tress-paw-s), I give it a solid six yelps for help. It is slightly smarter, slightly funnier, slightly more challenging, and far prettier than a typical episode of the animated small-screen Canadian-made phenomenon. In Paw Patrol-ese, it is the Zuma of the franchise: so inoffensive and eager to please that you’ll forget it exists by the time that you finish reading this sentence.

Unlike the 44-minute Paw Patrol adventure Ready Race Rescue that was released theatrically in 2019, Paw Patrol: The Movie is a real-deal big-budget animated feature film that, visually speaking, goes far beyond the no-frills CGI of the series’ 11-minute episodes. Everything in this supersized Paw Patrol world is rendered with a genuine attention to detail, yet without losing the familiarity of the characters. Children will still recognize the young techno-wizard Ryder (voiced by Will Brisbin) and his army of first-responder pets/friends/indentured servants. But they will also notice that everything in this Paw Patrol world looks shinier, slicker, more expensive.

Plot-wise, too, the film is a slight step up from the series’ repetition-heavy antics. Leaving the comfortable environs of Adventure Bay, the whole crew heads to the go-go-go Adventure City, where the moustache-twirling Mayor Humdinger (Ron Pardo) is set on turning everyone’s lives upside-down. Along the way, the pups encounter a brave new canine friend named Liberty (Marsai Martin); Chase endures a spat of post-traumatic stress (!) stemming from his early days in the metropolis; and a handful of celebrity parents (Jimmy Kimmel, Tyler Perry, Kim Kardashian) get to impress their kids by voicing comic-relief characters.

Canadian director Cal Brunker (The Nut Job 2: Nutty By Nature) and his team are clearly aiming not only for Paw Patrol’s preschool set, but also viewers who have since aged out of the show and might be dragged to the film by the desires of their younger siblings. The rescue scenes are just that more intense, the script’s pro-social themes that much more subtle. We’re still a long, long way from the heights of animation titan Pixar. But you (parents, that is, not whichever five-year-old might have a Globe subscription) might also put your phone down for a stretch to see just what’s happening on-screen. At the very least, you’ll see which toys you’ll soon have to buy. Yelp!

Yelp for help! Meet the Canadian filmmakers who brought Paw Patrol to the big screen
August 18, 2021 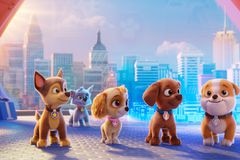 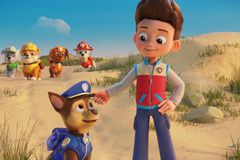 Dr. Strange Ryder, or: How I learned to stop worrying and tolerate Paw Patrol
August 1, 2019 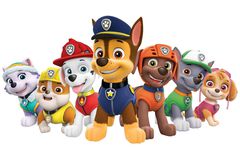