Like many women my age (a millennial, if you must), the “mom thriller” has had a substantial seat at the table come every Mother’s Day weekend. Following Ashley Judd’s domination of the genre in the nineties, the early 2000s were a particularly fruitful time for my family’s determined maternal fandom, with Jodie Foster in Panic Room (see also, Jodie Foster in Flightplan) and Jennifer Lopez in Enough in constant rotation, care of our local $2.50 VHS rental spot (yes, I said the early 2000s).

We were in many ways the perfect demographic for these flicks: a small, close-knit family comprised entirely of women of various ages, with an inherent esteem for powerful matriarchs and a penchant for emoting loudly at the TV and drinking cheap wine. While my grandmother was not the biggest fan of our viewing choices (she preferred the more reserved nature of films like The Joy Luck Club and Divine Secrets of the Ya-Ya Sisterhood), my mum, my sister and I lived for these solid, mostly B-movie thrillers that centred on mothers pushed to the point of breaking with niceties, much less non-violence.

And so Breaking In – the latest feature from director James McTeigue (V for Vendetta, Sense8) – continues this tradition, adding Gabrielle Union to the more recent canon of mothers guided by fury, maternal instinct and, here, the violent potential of a broken wine glass.

Union stars as Shaun Russell, a working mother of two whose father was recently murdered under circumstances that point, however vaguely, toward his criminal past. Left in possession of his sprawling, remote home outfitted with a seemingly impenetrable high-tech security system and more motion-detector-sensored rooms than one man could possibly need, Shaun and her children soon find themselves at the mercy of a ragtag gang of thieves in search of a fortune stashed on the property.

A twist, but not by much, of the typical home-invasion flick, Shaun finds herself trapped outside of the home while her children have been taken hostage by the gang of crooks using the house’s armaments to their benefit. What follows is a standard cat-and-mouse game between Shaun and the thieves’ leader, Eddie (Billy Burke), that makes decent enough use of its domestic interior/exterior dynamic; the trash talk between the two underscores most of this, with Burke’s character making do with corny, one-off lines like, “Moms don’t run, not when their babies are trapped inside the nest,” providing the bulk of the film’s punch. Shaun returns Eddie’s discrediting paternalism with her own clapbacks, of course, which is where the fun of this movie lies – in the campy and habitual nature of its generic retreading.

There is a familiarity to its characters and story, which doesn’t do much at all in terms of reinventing the genre, but very much meets its own expectations. The winking physicality of the stunt work, the internal conflicts of the poorly assembled team of criminals, the quick-witted, independently minded children (Ajiona Alexus of 13 Reasons Why and the wonderfully spirited Seth Carr of Black Panther), the hokey, pseudo-feminist dialogue, the easily dispensable father (Grey’s Anatomy’s Jason George), the lack of character development outside of the main, unevenly plotted action – this is classic mom-thriller fodder as seen through a drone shot (literally, there is a drone).

While my mother and I live on different coasts now, we still keep each other updated on the latest women-centric thrillers we’ve been watching (thankfully, she’s since upgraded to a PVR). Much like Breaking In, the majority of them are not especially well-crafted or particularly exemplary of filmmaking as the exceptional seventh art its makers claim it to be. But they are, for lack of a better word, entertaining. For about 90 minutes we get to congregate and share in our excitement of seeing women kick butt on screen, some generically located, exaggerated and, more often than not, cliché version of ourselves, the original Liam Neesons in Taken. And, God knows, there are a lot worse things than that. 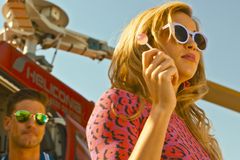 Film Review
Review: Disobedience is a devastating and beautiful love story
May 17, 2018