Both entertaining and political, Christian Petzold’s Transit is a film that cleverly trades on familiarity. Its story of desperate emigrés seeking transit passes out of occupied territory will ring bells with anyone who has ever watched Casablanca; its action takes place in the international centres of Paris and Marseilles. It is the German director’s juxtaposition of those two that is novel and wickedly effective. Transit is a story of the Second World War set in what appears to be contemporary France.

Petzold’s starting point is the 1942 novel Transit by Anna Seghers, the East German writer also known for The Seventh Cross, a book about the Nazi concentration camps that was adapted for a 1944 film starring Spencer Tracy. With only a small amount of elision or vagueness, Petzold can move a story about refugees in occupied France into a timeless space that looks like the present, permitting fleeting glances of video screens, for example, but eliminating cellphones altogether.

Transit begins with a scene where the protagonist Georg (Franz Rogowski) escapes a roundup and runs through streets marked with bold graffiti and dotted with fancy boutiques as French police officers wearing their distinctive riot gear pursue him. Some initial confusion will fairly quickly give way to an “aha” moment, as the bones of the wartime narrative are so familiar. What actually takes more intellectual effort is following a twisted story told in both French and German.

A German refugee working in the underground, Georg has to deliver some letters to a writer in hiding but finds the man has committed suicide. Among his things are the crucial identity papers that would let Georg himself escape before the Germans arrive in the city. Fleeing to Marseilles, he assumes the dead man’s identity and begins a tense game, joining the queues outside the Mexican consulate to obtain an all-important transit pass while hiding from the local officials who are rounding up refugees without exit visas. During this period of fraught waiting, he meets other refugees, including the mysterious Marie (Paula Beer). She haunts the streets and cafés, anxiously seeking her husband, who was supposed to meet her in Marseilles with their visas.

The various turns in this story make Transit something of an old-school entertainment, and yet there is nothing sentimental in the stratagems and sacrifices to which these refugees resort. The implication of the contemporary setting is crystal clear; in one scene, Georg knocks on the door of a friend’s house to find she has left and the apartment is now filled with a large group of African migrants. Georg retreats in confusion from another fleeting image of the actual present.

Both leads fit their performances seamlessly into this destabilizing scheme, providing a provocative timelessness to the characters. Beer, often seen playing innocents in historical dramas, creates a woman who hovers seductively outside time while Rogowski’s restrained delivery of the battered Georg suggests the fear behind a necessarily secretive exterior. He has a particularly fine scene with the suspicious Mexican consul who puts him on the spot, asking the famous writer what he last wrote. Rogowski pours into Georg’s daring answer all the anger of his entrapment.

Yes, Petzold’s film, which made its debut at the Berlin Film Festival last winter and also showed at the Toronto International Film Festival in September, does rather assume a white, Western audience for its effect, but that is its point. It takes all the cultural freight associated with European wartime stories and pushes it into the present, asking viewers to recognize that they don’t accord the same sympathy to contemporary migrant tales. Making the link between wartime fascism and current anti-refugee sentiment quietly explicit, Transit’s slippery narrative act is a notable achievement. Petzold has created a Second World War adventure that is not a sentimental costume drama, a contemporary political parable that is not a didactic sermon. 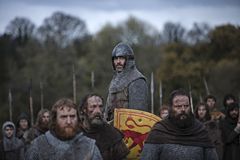 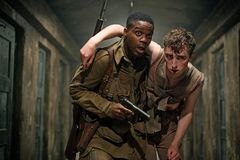 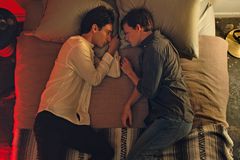