In the original Marvel comics, a muscular alien demigod called Thanos expends considerable resources collecting six magical gems and fitting them into a golden glove in order to win the fickle affections of Mistress Death, who is the embodiment of death in Marvel’s fictional “universe.”

Combining the power of the prized jewels – called “Infinity Stones” – the thick-necked Thanos exterminates 50 per cent of life, everywhere, across planets and star systems. It’s a despairing bit of genocidal peacocking driven by that most desperate motivation: love. A less eager suitor may settle on concert tickets, or a dozen red roses. But to woo Death Herself, Thanos delivers the decimated corpses of half the galaxy to her feet.

It’s equal parts tragic, monstrous and sort of sweet: a cross between Antony and Cleopatra-styled Shakespearean tragedy and John Hughesean doe-eyed romance that reveals the preposterousness and exuberant stupidity that enliven the best superhero comics.

The cosmic entity Mistress Death is absent in Avengers: Infinity War, the megabudgeted Marvel Cinematic Universe blockbuster “event” that draws together a decade of world-building and complicated franchise arrangements. Instead, Thanos (played with requisite villainous relish by Josh Brolin) is motivated by more purely Malthusian ends. His aim is to collect the stones, which have been scattered across Marvel Studios’ existent superhero franchise films, in order to decimate the galactic populace. His aim is “balance.” He is, in his word, “dispassionate.” His madness is utterly, boringly conventional.

A fitting (almost) end to the Marvel Cinematic Universe – or this “phase” (to use the marketing jargon) of it, anyway. Death, if not Mistress Death, hangs over Infinity War like an executioner’s axe, with the combination of Thanos’s mass extermination plot and the expiring contracts of many of the franchise’s fatiguing banner stars spelling curtains for some of Earth’s mightiest heroes.

Critics tasked with reviewing Infinity War were explicitly asked not to give away who dies and who doesn’t “out of respect” for the makers of these films and their legions of worldwide fans. To the last point: The manner in which studio financiers weaponize fans as a bulwark against critical volleys is truly pathetic.

As to the question of respecting the movie’s creative team? I’m sure Brolin, Robert Downey Jr., Scarlett Johansson, Chrises Evans, Pratt, Hemsworth etc., were all handsomely remunerated for the efforts, regardless of whether they’re respected. But, no spoilers here. And not because of studio PR marching orders, or even because the film’s plot twists are especially precious. Simply, Infinity War is not worth spoiling. After all, the reality-bending, time-warping magical conceits introduced across the series effectively render all deaths reversible. And as even a casual reader of such comics knows, the concept of a short-lived “superhero death” is a long-standing meme of the genre. These fallen heroes are not worth your tears.

One may more reasonably weep for the state of megablockbuster moviemaking itself, a mode of entertainment that has been defined by the cape-and-cowl adventure picture since at least the success of the first Iron Man in 2008. Over a decade, Marvel and its expansive factory farm of talent have wheedled a formerly outsider genre into the machine-made standard of entertainment. Their mix of big-ticket stars, big-budget action sequences and easily reproducible characterization has proven uncommonly popular and, more importantly, exceptionally profitable. Deep in the cubicles of Hollywood, other studios scramble desperately to clone the “Marvel formula,” like scheming refreshment scientists striving to crack the secret formula for Coca-Cola.

Their failures are more noble than Marvel’s mightiest triumphs. It is sometimes quipped of pizza and sex that, even when they’re bad, they’re good. As it applies to the Marvel Cinematic Universe, this equation demands inversion. These are corporately tooled products dressed in the ill-fitting spandex onesie of cinematic astonishment. Their integrated plotting, marketing and reception bends fans and critics to the whims of studios. They set the tone of the modern blockbuster, delimiting the medium’s possibility in the process. Worse: Their bullying relentlessness spills out of the cinemas and theme parks and roils out into everyday life (to wit: The other day I purchased an Avengers-branded pineapple because, reader, there was no alternative.) Even when they’re good, they’re bad.

To go even further, the Marvel Studios films are so bad precisely because they are good. Even when these films are firing on all cylinders – milking their computerized action set-pieces for maximum whiz-bang effect, nailing their glib one-liners, purposefully commanding a requisite sense of seriousness from their sprawling cast of superpowered characters – their impact on the motion-picture arts amounts to a net negative. They privilege sameness over invention, to such a fatal extent that even modest revisions on the established formula (as in the much-ballyhooed Thor: Ragnarok) are praised to wild excess. Their baseline tradition of passable quality inures us to demanding anything better, or anything else at all, really.

Yet even by Marvel’s own standards of serviceable mediocrity, Infinity War fails. And not merely because it cloyingly plays to the audience’s presumed sympathies for a set of plastic-molded action figures whose fates have, until next year’s culminating instalment, been scattered to the wind. The movie is beset by the very uniformity that defines the genre, a problem that presents itself when its clutch of wisecracking egoists are assembled to butt swollen heads and crack wise over one another. The plotting is bogged down by fetch quests and sundry deus ex machinations. The jokes are flat and, given the severity of the film’s premise, weirdly tone deaf. (Dave Bautista’s ripped alien Drax remains the superfranchise’s best-written character precisely because, drained of guile and irony, he is so refreshingly un-Marvel.)

There is a faint hope that with Infinity War’s forthcoming, inevitably retconning follow-up, the Marvel Cinematic Universe will finally draw to a meaningful close, freeing fans of cinema’s baser pleasures from its box office-dominating thrall. But to quote the maniacal if coldly pragmatic Thanos, such optimism is misplaced. There will be another phase. Another crop of heroes. A new Iron Man, a fourth Spider-man, a vault of F-list caped crusaders rocketed onto the big screen.

Those of us exhausted by this cycle of corporate hegemony-as-entertainment may well wish to find our own bloated corpses washed up at the feet of Mistress Death. But as Infinity War glumly, hopelessly suggests, not even death itself can offer a release from Marvel’s mighty movie gauntlet – a weapon of cultural dominance that doesn’t so much expand the blockbuster to infinity as demarcate its ever-contracting perimeter of possibility. 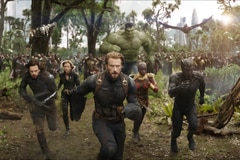 Justice, but no peace: Where superhero cinema goes from here
November 15, 2017 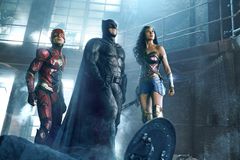