I can’t believe I’m typing this, but inside The First Purge is a scrappy little indie fighting to come out. Although this is the fourth instalment in the Purge franchise, it’s a prequel to the other three, a chance to be born anew. A missed chance, as it turns out.

We’re in a parallel-present United States of Discontent: crime high, employment low, government broke, racism rampant. The extreme-right wing creates and elects a third political party, The New Founding Fathers of America, or NFFA (read: Tea Party). Led by President Bracken (good name), they develop a social experiment: For 12 hours, from dusk to dawn, the citizens of Staten Island are free – nay, encouraged – to commit any crime, including murder, without punishment. Those who participate are given $5,000 and a pair of glowing contact lenses, to record and upload video of the action. Monitoring the footage from a fortified aerie are Government Lackey (Patch Darragh) and Misguided Social Scientist (Marissa Tomei, who I hope turned her Oscar to face the wall so it wouldn’t have to see this).

The experiment is quickly revealed to be a class and race war, a chance for rich white folks to get rid of low-income, black and Latino people – the only people desperate enough to risk death for $5,000. We meet (just barely) and follow a few: drug lord Dimitri (Y’lan Noel); his ex-girlfriend Nya (Lex Scott Davis), a community organizer; Nya’s kid brother Isaiah (Joivan Wade), who’s drawn to gang life; and Nya’s pals Luisa and Delores (Luna Lauren Velez and Mugga). Mugga enacts the biggest theft of the night, handily stealing the movie. I’d happily watch a whole Purge about her.

For the NFFA, however, the early hours of the evening prove a disappointment, because most participants have no interest in killing each other. The kindly ones hole up in a church, and the fun ones throw a massive street party. So it’s up to the white overlords to do the murdering. Cue a white-supremacist motorcycle gang, KKK members and jackbooted storm troopers in vinyl overcoats, very SS-meets-S&M.

Here’s where things could have gotten interesting. After Donald Trump’s election, screenwriter James DeMonaco (he also wrote and directed the first three Purges) and director Gerard McMurray suddenly had a potential political allegory on their hands, a chance to transform this franchise from schlock to Get Out-level social commentary. There are scattered references to current events: a woman is grabbed by the … kitty; a black man is pinned down in a sports stadium.

We’ve certainly witnessed a purge-like event in real life: Los Angeles, 1992, when officials made the decision to let South Central burn. Not unlike this film, the bulk of the crimes in the L.A. protest were arson and looting (statistics showed that women primarily took diapers and baby formula). But sadly, there is no sight as scary in The First Purge as that of the real-life L.A. cops turning their cars and driving away, leaving citizens to fend for themselves.

Alternately, The First Purge could have veered into blaxploitation territory. Since the characters are already cardboard-thin film tropes – the Drug Kingpin, the Kid, the Defiant Sister, the Mouthy Sidekick – DeMonaco and McMurray could have had some smart fun by celebrating these stereotypes as heroes. Not just “a drug kingpin saves the day,” but “a drug kingpin saves the day???” Unfortunately, any deeper meaning or relevance is merely hinted at, rather than made the most of.

I see another hidden allegory. Instead of allowing for character development, satire or even a dread-filled buildup to the mayhem, the overlords of studio and marketplace have dictated that we get a blast of action every minute, however nonsensical – they want us cackling in inhumane glee, not gasping in humane horror. Evidence of this, and of the cynicism where this franchise’s heart could be: The closing credits feature a commercial for the new Purge TV series, due in September.

Film Review
Review: Upgrade is the genre trash you’ve been waiting for
June 28, 2018 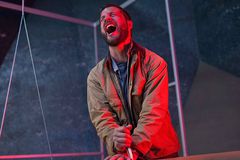 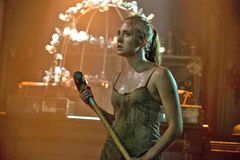 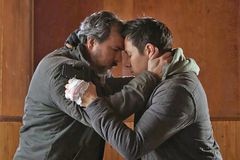