Captain Marvel arrives in theatres like a cosmic-powered punch to the head. On its surface, the new Marvel Studios extravaganza sells itself as the most enlightening of superhero offerings. Its lead is (finally) a woman, played by the delightful, talented and socially conscious Brie Larson. Its story is one of empowerment and self-determination, set to a nostalgic nineties-era soundtrack. Its supporting cast includes a cute little cat named Goose. But this shiny and progressive and golly-gee packaging misrepresents how Captain Marvel made its way into the world, and what it is actually about. Namely: money, the easy exploitation of intellectual-property, artistic conformity and queasy politics that undermine whatever liberal notions it’s peddling.

This isn’t to say that any of Marvel’s 20 other offerings are untainted goods. From 2008′s limber Iron Man through last year’s lumbering Avengers: Infinity War, the Marvel Cinematic Universe (MCU) has been built on the concept of getting as many people as possible to pay for inoffensive movies that feel written by committee (which they are), that defer to timid wait-and-see notions about gender and diversity (there is a reason it took 20 films to get to a woman-led film, just as it took 18 to make Black Panther) and that are literally underwritten by the U.S. Department of Defense (Iron Man 2, for instance, was granted access to a vast array of military hardware). But precisely because Captain Marvel is being trumpeted by the Marvel machine as a shining beacon of diversity – and that audiences everywhere should not only appreciate the studio’s efforts, but be grateful as hell – its failures feel especially acute.

Almost immediately, Captain Marvel puts itself and its central saviour atop a faux-pedestal of progress. If Anna Boden and Ryan Fleck’s film was genuinely concerned with presenting a layered, complex, inspiring female hero who could empower young audiences everywhere, then they would have crafted exactly that kind of character and movie. Instead, the married co-directors (who collaborated on such solid indies as Half Nelson and Mississippi Grind) and their army of co-writers (five are officially given “story by” credits) have engineered a brutally by-the-numbers origin story with a patina of social importance.

Larson’s superhero begins the film as a kick-butt soldier named Vers, fighting for what she assumes is the good of her alien race, the Kree (why she doesn’t have the same blue skin as her Kree comrades is never explained, but this should be the least of our concerns). After little internal struggle or conflict, but a whole lot of MCU gobbledygook, Vers is stranded on Earth circa 1995, and left to partner with a young superspy named Nick Fury (a digitally de-aged Samuel L. Jackson).

If this set-up sounds promising, hold up a sec, because in addition to the film looking incredibly bland – most of its action scenes are shot in the murky dark, underscoring just how critical a Taika Waititi or a Ryan Coogler are to enlivening the MCU visual palette – its pacing and narrative speed-bumps provide almost nothing in the way of tension or characterization. By the end of Captain Marvel, we know more about Guardians of the Galaxy’s dang talking tree than we do Larson’s intergalactic warrior.

Review: Even by Marvel’s own standards of mediocrity, Avengers: Infinity War fails

Stan Lee: The father of the American superhero and modern entertainment

Review: Ant-Man and the Wasp proves size isn’t everything

Bizarrely, Captain Marvel is less interested in fleshing out its own hero than it is in filling in the blanks of the MCU. This isn’t a film about one character so much as it is yet another marketing plank for weary audiences – who have no real choice now, 21 movies in – to continue their long slog, lest they fall behind the MCU’s continuity marching orders. As much as Larson tries – with supreme commitment at most points – Vers remains more of a nice idea than a fully realized being. In a seemingly intentional and callous move, this ostensibly feminist-forward movie treats Vers like an object, something that only exists to allow the further vomiting up of more MCU mythology.

Not to spoil things (well, okay, a bit), but the film only seems truly excited with itself at the very end – when it shows how Fury came up with a certain code-word that has since become franchise lore. Is a single word glimpsed on Fury’s computer screen just as, if not more, important than the gears of the MCU’s mightiest hero? Captain Marvel argues: yes.

I suppose the movie might inspire some children, in that it will get them interested in a life in the U.S. Armed Forces. There is a line repeated early and often in the film: “I’m not fighting a war, I’m ending it.” But given that the movie looks an awful lot like a active-duty recruitment ad – Vers, it turns out, was once a hotshot fighter pilot on Earth, and the film is littered with U.S. Air Force logos, including on a child’s T-shirt – it is not interested in ending a war, but waging one, specifically a propagandist battle for the hearts of minds of its young audience.

This is no accident. Marvel released a promotional video last week showing Larson climbing into a shiny F-16 fighter aircraft, with Boden gushing that “the Air Force was welcoming and amazing." If the directors gave an inch of their story toward explaining exactly what role the Air Force played in Vers’s life – aside from it looking like a super-cool job for all you kids out there – then Captain Marvel’s intimate relationship with the U.S. Department of Defence might make a modicum of narrative sense. But it didn’t, and the result smells a whole lot like napalm.

There is little doubt that Captain Marvel will make a spectacular amount of money. And I wish Larson, and her game co-stars (including a hilarious Ben Mendelsohn, finally cast as someone other than a snarling villain; sorta), all the best. But Captain Marvel is not progress – it is a product. Buyers, beware. 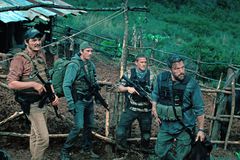 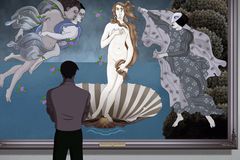 Film Review
Review: Greta is not the tongue-in-cheek craziness that Isabelle Huppert fans are hoping for Subscriber content
February 28, 2019 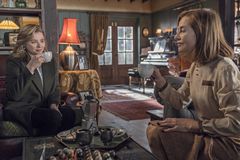