Once upon a time, all it took to make a blockbuster romantic comedy were two bankable leads and one clever impediment to their union – a mistaken identity, say, or the few thousand miles between Seattle and Baltimore.

Today, as Hollywood places all its bets on superhero action, it seems a producer must have a gimmick bigger than the Empire State Building to get a studio to invest in a rom-com. A closet full of whips and chains might do it – or maybe the biggest real-estate fortune in Asia.

Crazy Rich Asians: I laughed, I cried, I saw myself reflected on-screen

50 Shades of Grey had the billionaire businessman Christian Grey and his secret sexual tastes. In Crazy Rich Asians, it’s just the fabulous wealth that’s in the closet. Taking its melodramatic story from the bestselling novel by Kevin Kwan, Crazy Rich Asians follows Chinese-American economics prof Rachel Chu (Constance Wu) as she travels from New York to Singapore with her boyfriend Nick Young (Henry Golding) for a family wedding. There she discovers that her laid-back lover is actually the heir to a massive development empire and the most eligible bachelor on the island.

Expecting a routinely stressful trip to meet the folks, Rachel instead finds herself battling the envious gossip and fanciful machinations of Nick’s outrageous friends and family members. In particular, she has to survive the plotting of his powerful mother Eleanor (Michelle Yeoh) who is determined that this American nobody is not going to walk off with her prince, and the family’s future CEO. If 50 Shades was a retelling of Beauty and the Beast, then Rachel is Cinderella – as one of the movie’s many obnoxious secondary characters keeps telling her.

Alongside the fairy-tale romance, there is a social struggle here between the American pursuit of individual happiness and the Chinese ideal of sacrifice for family. Unfortunately, that’s a string on which director Jon M. Chu creates so little tension that we never doubt Rachel and Nick’s true love will beat out Eleanor’s entrenched belief in endogamy. Despite Yeoh’s chilling hauteur as the intimidating Eleanor – she is one of the few villains in the piece not overplaying the role – you know that she’s going to lose because what she really cares about is class more than family.

The moment where Rachel finally bests this snobby opponent feels both anti-climactic and belated. Our heroine had been set up as a much spunkier character than this: An opening scene depicted her as a star academic of cheerful sang froid winning a hand of poker to prove a point about economic behaviour. Still, confronted by the horrible Singapore relatives, Wu does manage to suggest affability, intelligence and backbone in a pleasant lead performance, whereas Golding’s insipid Nick spends the entire movie looking only mildly happy – or vaguely concerned. It’s not hard to believe this muffled character is very, very rich because he seems quite cut off from anything hard, sharp or deep.

And so we absentmindedly lap up Nick and Rachel’s bland romance – yes, of course, love is far more important than money – along with the real brew that Crazy Rich Asians is offering: The spectacle of extreme wealth. The film is a voyeuristic smorgasbord, introducing us to people who will spend $1-million on a pair of earrings, decorate their entire houses in gold and hold bachelor parties on private islands.

Generously you might say Crazy Rich Asians is a satire of Chinese family values and the social strata of the overseas Chinese – as well as a major spoof of the ornate decorative tastes of the moneyed class – but the larger society is missing from the picture. There are only a handful of scenes, as Nick and Rachel dine on street food or when Rachel lures Eleanor to a mah-jongg parlour, that give any sense Singapore is a real place rather than a fantasy land.

And that fantasy land can be an oddly uncomfortable location: The comic Awkwafina joyfully contributes her manic energy to the role of Peik Lin, Rachel’s local friend and ally, but the mocking of Peik Lin’s family, with their crass manners and their ostentatious house, is more ugly than funny.

As the obscenities of wealth accumulate while a large cast of Asian and Eurasian actors render their many silly characters, the source of the laughter becomes troubling.

Clearly, some Asian audiences may experience this film (produced by a largely Asian and Asian-American creative team) differently. A white viewer such as myself witnessing this overblown display may find themselves in that awkward territory where somebody else’s ethnic comedy leaves them feeling complicit in racial prejudice. 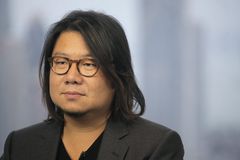 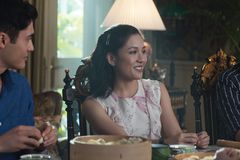