We do not deserve Lynne Ramsay.

The Scottish filmmaker has proven this fact several times over the course of her career – though not nearly as often as she should have been afforded the chance. Over the past two decades, Ramsay has made just four feature-length films – four films of immense power and darkness and soul-withering devastation. But only four.

Thanks to the various and spurious justifications of industry gatekeepers, the director has been shoved into the box of being a “difficult” artist – or, as she accurately describes it, of being a woman. “You’ve got to stick up for what you believe in. If you don’t do that, you’re doing a disservice to the audience, because you’re making something really diluted,” she told The Guardian recently, describing how she left the Natalie Portman western Jane Got a Gun on the first day of filming. “And if you do that when you’re a guy, you’re seen as artistic – ‘difficult’ is seen as a sign of genius. But it’s not the same for women.”

And so Ramsay has been able to produce only four films – but, again, what four films those are.

Ramsay startled the international film scene with 1999′s poetically bleak Ratcatcher, which plumbed the muckier depths of kitchen sink realism as it chronicled the lives of those stuck in a Glasgow housing project. She followed that hypnotizing misery with the increasingly confident and brazen works Morvern Callar, We Need to Talk About Kevin and now her ultimate masterpiece, You Were Never Really Here.

On its surface, the new film’s source material doesn’t seem like typical Ramsay fodder. Jonathan Ames’ novella of the same name is certainly a bleak story, but more so in that it’s a gritty mash of disposable pulp – a crime tale that is more focused on executing acts of tremendous violence than the violence that lurks in the mind.

A thriller complete with a this-goes-all-the-way-to-the-top conspiracy, You Were Never Really Here centres on Joe (Joaquin Phoenix), a military veteran and former FBI agent who now specializes in rescuing trafficked girls – and ensuring their captors are disposed with in the most brutal fashion possible. After being tasked with finding the missing daughter of a New York state senator, Joe is thrust into a twisted underworld filled with shifty middlemen, on-the-take cops, and a Gothic sex-mansion ripped from the most obvious parts of Eyes Wide Shut.

It is lurid and frequently gross material, and handled by any other filmmaker it would have reeked of exploitative seediness – a big-screen facsimile of True Detective Season 2. Yet in writing her own adaptation and finding bold collaborators in Phoenix, cinematographer Thomas Townend and composer Jonny Greenwood, Ramsay has delivered a down-to-the-marrow character study more concerned with the act of killing than the killing itself.

As she follows Joe through his myriad grim tasks – from staking out targets to cleaning his weapon of choice, a ball-peen hammer – it is clear Ramsay takes no delight in delivering cheap thrills, in splattering blood to the wall just for the sticky shock of it. One standout example that has already made waves since an unfinished version of You Were Never Really Here screened in Cannes last year is Joe’s mid-film invasion of a Manhattan brothel. Instead of filming Joe’s assault with, say, an all-the-rage-these-days single-take tracking shot, Ramsay depicts the entire sequence through the perspective of the building’s surveillance cameras. It is a silent and unnerving bit of filmmaking that – like its most immediate forebearer Taxi Driver did upon its arrival in 1976 – upends modern expectations of cinematic violence.

And just like Scorsese’s work, a mere body count – which is high here, but not counted with any of the garish glee of, say, a modern pain guru like Nicolas Winding Refn – holds no interest for Ramsay. It is Joe’s diseased state of mind that fascinates and intrigues. In 90 intense, claustrophobic minutes she offers audiences a glimpse of it that remains unshakable.

Phoenix is as integral to the the film’s shadowy art as Ramsay. His mercenary antihero is barely afforded an index card’s worth of dialogue, but that doesn’t prevent the actor from conjuring a fully lived-in soul who makes the audience intimately aware of his every tick and shiver. Forget the fact that Phoenix put on considerable weight and grew a mountain-man beard to illustrate Joe’s post-traumatic societal isolation – the actor’s eyes and pained expressions do most of the heavy lifting, and Ramsay captures it all beautifully, if such an experience could be even dubbed beautiful.

Set against the high-tension strings and jarringly funky synthesizers of Greenwood’s score, the film is transformative and transfixing.

Although it is not her title, You Were Never Really Here neatly summarizes the film industry’s dismissive attitude toward Ramsay thus far. May this shattering, necessary work change that line of thinking forever.

Film Review
Review: Itzhak documentary profiles a virtuoso who became a brand unto himself
April 5, 2018 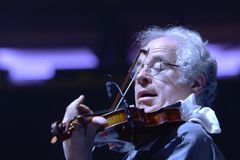 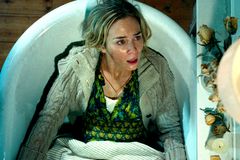 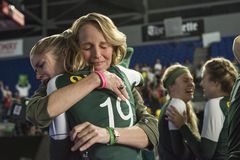