To tell the story of The Angry Birds Movie 2, one must first flash back all the way to 2009. It was a simpler time. Barack Obama was U.S. president. We had only recently stopped using our phones as phones. Commuters and young families, not yet inundated with Instagram and Peppa Pig to amuse themselves, turned to a mobile gaming app called Angry Birds.

The threadbare premise was enjoyable enough. Whether nursing a newborn or sitting on the subway, you could find yourself addictively tapping at a screen in a futile attempt to launch multi-coloured birds from a slingshot at the evil pigs who threatened to take over the world.

A decade later, Angry Birds has gone from a harmless time-waster to a verifiable media empire, launching 18 video-games (including one in virtual reality), an animated television show, a line of toys involving multiple franchises (Angry Birds Star Wars, Angry Birds Transformers), a theme park in Finland, a line of soft drinks and an attraction at the Kennedy Space Center called Angry Birds Space Encounter.

There are also two movies, the second of which opens this week. The story of the original Angry Birds film (which made about US$350-million at the box office in 2016) centered on a protagonist named Red (voiced by Jason Sudekis). Red isn’t so much angry as he is downtrodden and sarcastic. After spending a lifetime feeling criminally unloved by his fellow avians, perhaps due to his comically over-sized eyebrows, Red finds himself investigating suspicious-acting pigs. He and his bird friends end up foiling the plans of their evil porcine leader Leonard (Bill Hader), who plans on stealing and eating their young. Finally, after saving the day, Red experiences what it is like to be adored by all of his fellow birds and his mild sense of resentment dissipates forever.

Flipping the switch, the plot of Angry Birds 2 begins with a truce being called between all of pig and bird kind. That sends Red, who was just getting used to his hero status, into an existential tailspin until both species find themselves under attack from an unknown threat. It’s a giant purple bird named Zeta (Leslie Jones), who lives fabulously on an isolated frozen volcano with her daughter Debbie (Tiffany Haddish). When Zeta decides she’d like to expand her territory, Red teams up with his pig frenemy Leonard and some new sidekicks, voiced by welcome additions including Awkwafina and Sterling K. Brown. Rebecca Bloom plays Silver, a brainiac engineer who threatens Red’s ego (yet quickens his heartbeat), thanks to her natural leadership skills and sheer intelligence. She seems way cooler and much younger than the embittered and charmless Red, but whatever! Eyebrows!

With a current rating of about 70 per cent on Rotten Tomatoes, the Angry Birds sequel is now the highest-rated video-game movie in the site’s history. It’s definitely a quicker, more entertaining upgrade but remains formless as an actual motion picture. The pleasures come from a multitude of quick-paced gags that trade in break-dancing competitions, needle-drop montages, hatchlings adorably mispronouncing swear words, candy-coloured CGI-tropical environments, so many fart and butt jokes, plus a Dawson’s Creek-indebted flashback involving an ill-fated romance between birds. (I enjoyed that!)

The movie also features a brand new directing and screenwriting team, who seemed to have taken a page from the #MeToo movement. The plight of Silver and Zeta sees them trying to assert their authority around insecure and commitment-phobic male birds. While these characters aren’t entirely defined by their relationships, their characters stand out in a generally bland male ensemble doomed to re-enact Baby Shark parodies and pass gas until eternity. We know why these caged birds sing.

Parts of this new Angry Birds have the fun comic mania of a classic Bugs Bunny cartoon or a Marx Brothers reel. A sequence in which three adorable baby birds try to rescue some eggs that have drifted off to sea is pure visual merriment. A scene in which Red and his team must puppeteer a dead-eyed oversized eagle costume in order to sneak past the security guards is strange and Weekend at Bernie’s-enough to be genuinely subversive, especially when that eagle is forced to pee next to another eagle security guard at the urinal.

And yet, there’s a mean-spiritedness here that isn’t necessary. On at least two occasions, characters commit acts of cruelty and violence without consequence. No one gets a full-fledged character arc except Red, who finally learns how to share credit with his teammates. Yet even that pales in comparison to every other animated franchise in recent memory, which know how to craft compelling characters with way more emotional payoff and investment than this lazy film wants to muster up.

Just like its mobile incarnation, The Angry Birds Movie 2 simply pelts you with loud, shrieking diversions. The filmmaking has levelled up, but you’re still wasting your time. Film Review
47 Meters Down: Uncaged would jump the shark, if it could imagine something half that entertaining
August 15, 2019
Film Review
After the Wedding is the Julianne Moore-Bart Freundlich collaboration no one outside the Moore-Freundlich household asked for
August 14, 2019 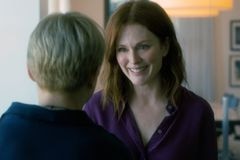