During the most crucial summer for studio theatrical releases in film history, The Night House (coming to a theatre near you from Fox Searchlight) is a thing that Hollywood rarely makes any more: a terrifying and emotionally moving horror movie for adults, recalling a time when a film like What Lies Beneath could be a summer blockbuster. It’s a showcase for the exemplary actress Rebecca Hall, whose unforgettable face conveys the underpinnings of terror through the hollow crevices of her cheekbones and dark eyed stare, and dares to begin its first 10 minutes in near silence. As director David Bruckner slowly pans across wads of soggy Kleenex, and a casserole dish foisted at Hall by a well-meaning neighbour, you know that death has come to town.

When Hall’s protagonist (Beth, a teacher) finally speaks, she’s out for drinks with her colleagues (including her best friend Claire, played by a terrific Sarah Goldberg, of Barry fame). Against their admonishments, she pulls out a bloodstained envelope from her purse and begins reading her late husband’s suicide note, daring her audience to remain captive.

Beth is a newly widowed woman on the verge of a nervous breakdown, determined to understand why her sweet and dutiful husband committed such a traumatic act. She’s a hot mess and doesn’t care who knows it. Sitting dead-eyed at a desk during her office hours, an irate mother demands to know why her son received a C. Beth instantly upgrades the student to a B, and tells the parent that she was preoccupied by her husband shooting himself in the head. Rarely do actresses get the opportunity to be so caustically bitter and gain our empathy instead.

The film’s title comes from Beth’s insistence on staying put in the modernist homestead built by her late husband Owen (played by Evan Jonigkeit in shadowy flashbacks and voice overs), until it begins to talk back to her. The couple’s song (atmospheric indie rock anthem “The Cavalry Cross” by Richard and Linda Thompson) lurches on the stereo at unexpected moments, and soon Owen begins to communicate from beyond the grave, tracing words onto the foggy panes of glass windows and urging her out into the evening. As Beth begins to walk somnambulistically around the dark and treacherous woods that surround her property, she begins to see surrealistic visions that help her piece together disturbing bits of information. It’s possible that Owen was having an affair right before his death, or even worse: engaging in the dark arts.

Hall’s incredible performance gives The Night House a weight and watchability that far exceeds its flinty premise, which can occasionally veer into cliché (see: the elderly Black groundskeeper who is only there to urge Beth “to stay away from that place,” a discovery of old occult textbooks in a secret room). While women in the cinema have gone insane with demonic possession ever since Repulsion, Hall has a cerebrality and grit that helps her character remain grounded at all times, even when the actress is tasked with insane acting exercises, such as making out with her late husband’s ghost. As she guiltily goes through Owen’s phone for answers, stumbling upon a barrage of hidden pictures of women who look just like her, it’s a giddy delight to watch Hall’s face contort through all the stages of the Kübler-Ross model.

Though Hall rarely has scenes with more than one person, and is often seen talking back to walls and apparitions, The Night House remains scaled down pandemic filmmaking at its finest. It’s elegantly filmed and well constructed, building to a haunting climatic sequence that could sear your eyeballs. Our female lead is pushed to her breaking point, yet isn’t exploited or sexually tortured, and remains a full and complex human being. At a time when algorithmic streaming has dumbed down horror films to their most formulaic, Brucker’s direction happily proves that a gripping mystery and formidable star can be enough to incite true psychological depths of terror. It’s a thrill to see how The Night House leaves bread crumbs instead of bludgeoning you over the head, as you sink into its terrifying trance. This is one accommodation you’ll want to book. 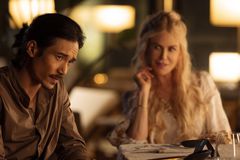 Film Review
I Carry You With Me blends drama and documentary to tell a high-stakes immigrant love story
August 19, 2021 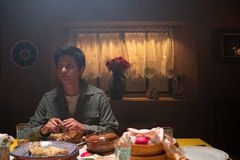