Yeah, it’s not good. Writer/director Ricky Tollman has turned the true story of Rob Ford’s crack video into a fake cris du coeur for millennials. The scandals of the late Toronto mayor are now just background; the plot focuses on the tribulations of three 20 somethings itching to break into journalism and politics, but disheartened that there’s no room for them. Or perhaps they are quietly, day-to-day running journalism and politics, yet getting no credit for it. The movie wants to have it both ways, but proves neither. And that’s only one of its problems.

The story should be simple: Bram (Ben Platt), a cub reporter at The Record, a fictional Toronto newspaper, is sick of writing listicals like “Best Brunch in the City.” One day – is it a year into his tenure? The chronology of the film is so unclear, I couldn’t tell – he answers the phone and gets a tip that Ford (Damian Lewis, unrecognizable in ill-constructed prosthetics) is palling around with drug dealers. We follow Bram’s start-stop efforts to get the story.

Opinion: Rob Ford, Run This Town and why it’s time for ‘fat suits’ to become a thing of the past

Meanwhile, over at City Hall, smart political aides Kamal (Mena Massoud) and Ashley (Nina Dobrev) are trying to keep the mayor’s office functioning despite their increasingly unstable boss. But how loyal should they be to a job that requires lies and sanctions abuse?

For a movie about writers and spin doctors, however, the storytelling here is way off. Scenes that should be quick are stretched thin; scenes that should dive deep stay shallow. Over and over again, Tollman builds the action toward a moment, and then cuts away before the moment comes, killing his own momentum. None of this adds suspense. It adds frustration. In mid-film, a flashback structure is introduced – to serve one scene, it turns out, the climactic one. But the chosen climax, a job interview, is so misjudged, it elicits snorts of derision.

If Tollman’s point here is that this generation deserves more respect, he should have crafted characters that earn some. Bram, we’re told, won the big prize at a prestigious journalism school. So why doesn’t he know the first thing about how to report a story? We’re told he’s a good writer, but we see only haplessness. Instead of rooting for him, we’re infuriated by him at every turn.

On top of that, Tollman gets journalism itself spectacularly wrong. Bram’s editor David (Scott Speedman) has zero news instincts, and he offers Bram no guidance – which he certainly would, if only to protect his own backside. David’s boss Judith (Jennifer Ehle) actively discourages hot stories at the news meeting. (As if!) And physically, The Record appears to be built on a wormhole in time, because its printing plant is on-site. (Hello, 1980s.)

The City Hall characters fare slightly better, once you get past the teeth-grinder of an opening scene, where they swill beers during a late-night strategy session. The dialogue sounds like bad homework from a class called You, Too, Can Be Aaron Sorkin: “It is my turn to speak.” “Now I will counter what you said.” “Yet I disagree with you both!”

Massoud creates some genuine empathy for Kamal (which, in one of the film’s few nice touches, Ford pronounces as Camel), a child of immigrants who’s living the Canadian dream, albeit by enabling an anti-immigrant mayor. The best scene belongs to Dobrev, when Ford sexually harasses Ashley (based on real-life allegations that led to Ford’s appalling remark, “I’ve got more than enough to eat at home”). The scene works not only because we feel how frightening and humiliating sexual harassment is, but also because it’s the only scene that’s credibly written, well paced and builds to a proper crescendo.

As for Lewis’s Ford, the less said the better. Normally a fine actor, he’s played great characters all over Peak TV, from his breakthrough in Band of Brothers to Brody in Homeland, Henry VIII in Wolf Hall and Bobby Axelrod in Billions. But here, he speaks in a Hoser accent from – well, from the days that newspaper printing plants were on site. And apologies to the makeup department, but his prosthetics are dreadful.

Ford had a small, roundish head; Lewis looks like he’s wearing a pink cement block on his neck. You are never unaware of his makeup; it doesn’t recede, the way Gary Oldman’s eventually did when he played Winston Churchill in Darkest Hour. You cannot look at Lewis and see “Ford.” You see only “Latex.” (Or Mike Meyers as Fat Bastard in Austin Powers: The Spy Who Shagged Me.) Buried beneath that much plastic, Lewis can’t serve even the basic demands of the script: His face can’t slacken when he’s stoned, for example, or tighten with anger. He can convey only two things: “sweaty” and “lumbering.”

Ford’s story could not be timelier – the #MeToo movement has kick-started an examination of the culture of complicity around all types of abusers of power. It should have made a riveting movie. But like Lewis’s makeup, its good intentions got buried under layers of dreck. 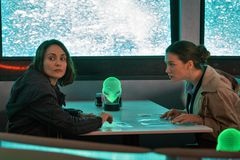 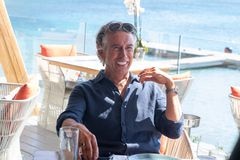 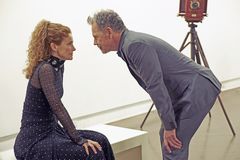