The pandemic has not been kind to Hollywood. Not only in the obvious ways: shuttered theatres, indefinitely delayed releases, hundreds of thousands of artists and tradespeople out of work. But we have also had to face this new should’ve-been-expected subgenre of what I’m going to dub coronart: films and television series shot during lockdown, about the lockdown.

Barely a year into this mess, and audiences already frustrated by *gestures broadly at everything* have also had to endure the turgid exploitation of Songbird, the faux “we’re all in this together” sentimentality of The Good Doctor, This Is Us and Connecting, and an ever-multiplying number of rushed documentaries that are all tripping over themselves to either make sense or wring entertainment out of These Unprecedented Times.

To this unfortunate list we can now add Locked Down, the splashiest of coronart thus far.

The new HBO Max film (streaming in Canada on Crave) is headlined by genuine movie stars (Anne Hathaway, Chiwetel Ejiofor), directed by a blockbuster-certified director (Edge of Tomorrow’s Doug Liman) and scripted by ... well, we can gloss over writer Steven Knight’s credentials. Although his Matthew McConaughey-gets-real-sweaty head-scratcher Serenity certainly has its guilty-pleasure defenders.

Anyway, this is all to say that Locked Down arrives with a glimmer of hope in these dark days. Hope that is dashed not three minutes in. Turns out that there is a reason most films worth watching take longer than 10 months to conceive of, write, pitch, cast, shoot, edit and release.

Opening at the outset of London’s lockdown this past spring, Liman’s film follows one extraordinarily unhappy couple who were all set to separate before the virus complicated the notion of physical distancing. In one bedroom of a swank Hackney townhome is Linda (Hathaway), a fashion executive who hates every part of her life, even before quarantine. In the other chamber is Paxton (Ejiofor), a recently furloughed delivery driver with a criminal past and a motorbike occupying far more of his time than his crumbling relationship.

Linda and Paxton hate each other, they hate themselves, they hate lockdown. But what they love is to spew out their feelings in long, winding, ostensibly witty speeches that unintentionally betray just what shallow, uninteresting, charisma-free creatures they are.

Imagine the worst night of two-hander theatre that you were ever subjected to in the Before Times. Then add in 12 too many scenes of (accurate but annoying) glitchy Zoom calls featuring other famous actors. And then multiply that by the number of minutes you’d be better served scrolling through the back catalogue of your streaming service of choice. And congratulations! You just successfully calculated coronart math, the sum of which is a big fat zero.

Eventually, mercifully, the plot pivots to something interestingly left-field. If you’ve seen the film’s trailer and you’re already aware of Hathaway’s curious penchant for starring in films like Ocean’s 8 and The Hustle, you already know exactly what narrative swerve arrives. But by this point, any genuine interest in Linda and Paxton has been drained, as is any admiration in Liman’s ability to film under unfilmable circumstances.

Late in the film, Paxton sighs and says with a grand certainty that “lockdown will eventually end.” Eh, maybe. At least Locked Down comes to a definitive close. No vaccine necessary.

Locked Down is available to stream on Crave starting Jan. 14

Film Review
Netflix’s Outside the Wire is RoboCop for dummies
January 14, 2021 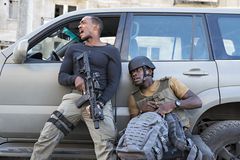 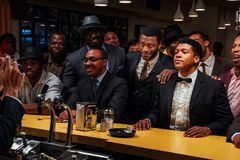