Paradoxes are central to the Terminator films, what with their time-travel shenanigans and bloodlines dependent on temporal disturbances. But the Terminator films are paradoxes themselves. Each new Terminator movie – at least all those arriving after the third entry – required the failure of the previous film to be necessary. Something had to go wrong for something to go right. But, so far, nothing really has.

The problem starts, in a way, with 2009′s Terminator: Salvation, which exists only to act as a retroactive continuity fix to the myriad disappointments of 2003′s Terminator 3: Rise of the Machines. But when Salvation faltered, too, and television’s Terminator: The Sarah Connor Chronicles also slipped in and out of the cultural timeline without notice, 2015′s Terminator: Genisys was engineered by Hollywood’s most fearless and clueless to reboot the whole franchise continuity once more. That didn’t work either, so now we have the new Terminator: Dark Fate, which promises – really, cross-our-skeletal-metal-T-800-fingers-and-hope-to-die promises! – to be the true successor to the Terminator franchise and deliver on the promise of James Cameron’s original two action-cinema hallmarks.

So many Terminators – and Sarah and John Connors and Kyle Reeses and Miles Dysons – had to die so that Terminator: Dark Fate could live. Was it worth the sacrifice?

I’ll go the monosyllabic T-800 route here with my answer and say: No. There are good-sized chunks of director Tim Miller’s new film that work well, and are even so thrilling as to briefly remind you of the pure shots of adrenalin that big-budget-but-dumb-as-bricks action movies are capable of producing. Maybe that’s thanks to Miller, given that he can boast solid explosion-and-car-chase credentials, owing to his work on Deadpool. Maybe it’s thanks to the returning presence of Cameron, who is directly involved with the franchise for the first time since Terminator 2: Judgment Day, only this time as a producer and one of the five (!) writers credited with the story. Cameron was never on-set for Dark Fate, but his go-big-or-blow-up-home style hovers over the new film’s money shots, including a furious one-two melee near the start of the film, which kicks off with a brawl inside a car plant before moving onto a crowded highway chase scene that flicks at the famous reverse-traffic breath-taker in To Live and Die in L.A.

But whatever new ideas that this movie thinks it is boldly exploring for the first time – the line between man and machine, the wobbly definition of destiny, the repositioning of damsel-in-distress clichés – are in actuality rehashes of not-especially inspired concepts that the franchise, with Cameron and without, has explored many times before. By the point that Miller and his team cycle through all the expected Terminator beats – ah yes, the final confrontation in a working-but-completely-abandoned industrial complex, glad that we’re getting that again – my only hope for the future of mankind was that the inevitable robopocalypse would wipe us all out already, so we could move onto other concerns.

Dark Fate opens shortly after the events of T2, with Sarah Connor (Linda Hamilton) and son/future robot-resistance leader John (Edward Furlong) on the run somewhere warm and sunny. But where T2′s first few minutes gave us a horrific glimpse of a nuclear holocaust, Dark Fate offers the franchise’s most terrifying vision of technology-gone-wrong yet: the digital de-aging of actors. Whoever was responsible for making Hamilton and Furlong look the way that they do in the film’s first few minutes – ostensibly just as young as they were back in 1991, but in reality an off-putting combination of waxy, weird and alien – should be given lifetime bans from CGI work, lest they inadvertently create the Skynet equivalent of Hollywood flashbacks. (The effects here make Ang Lee’s efforts to de-age Will Smith in Gemini Man look like the next-generation brilliance of a quantum computer.)

The film recovers quickly after this visual nightmare of a prologue, though, and we’re now in present-day Mexico City, where a robotically “augmented” human soldier named Grace (Mackenzie Davis) has been sent from the future to save the young factory worker Dani (Natalia Reyes) before another Terminator (Gabriel Luna’s shape-shifting Rev-9) can yadda yadda yadda. Not to be glib, but the story that we’re all wearily expecting is exactly the story we get, with barely a torque or twist to something new. Parts of the script unintentionally acknowledge such a lack of innovation and effort. Dani, for instance, repeatedly protests her importance to humanity’s future, telling Grace that “I’m nobody!”, thus nailing her cipher of a character. Meanwhile, a bloodbath set inside a Mexico-U.S. border detention centre carries great metaphorical potential, yet the scene arrives stripped of politics, purpose and interest.

It’s not all dire: Hamilton eventually shows up as a regular-aged Sarah, complete with a stand-up-and-cheer bazooka-firing moment. And a grizzly Arnold Schwarzenegger pops up midway as another iteration of a robot who’s learned to love – and acquired a keen sense of interior design along the way. (There’s no explanation offered as to why his T-800 has aged organically, but then again the film offers many questions without answers, including just how a military-grade weapon falls into our heroes’ laps and what law of physics the film might subscribe to given the ridiculousness presence of a late-game midair set-piece.)

Ultimately, Dark Fate is nothing more than a run-duck-and-repeat production – an extraordinarily familiar, if efficiently made, exercise in Terminatorology. If the franchise pattern holds, it’ll be back.

Film Review
The blunt police corruption thriller Black and Blue leaves no room for nuanced shades of grey, but that’s all right
October 25, 2019 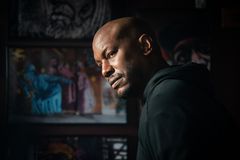 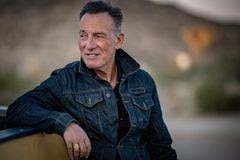 Film Review
Robert Eggers’ suffocating and intensely strange roommates-from-hell comedy The Lighthouse will drive you to the brink, in a good way
October 25, 2019 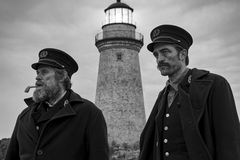