When I told my two kids that I could take them along for a media preview of the Sonic The Hedgehog movie, my seven-year-old son was beside himself. My nine-year-old daughter was pretty excited, too. But my son could have run in the loop-the-loop fashion that Sonic, the central character of Sega’s blockbuster video-game franchise, is famous for. Instead, he settled for jumping on the couch, and immediately got a timeout.

It can be tricky to translate a beloved video-game character to a live-action film, as the makers of Sonic The Hedgehog discovered last year, when its first trailer was released. The backlash from fans was swift. That earlier version of the beloved blue hedgehog with super speed was described as creepy and too humanoid. The criticism sent director Jeff Fowler back to the drawing board and delayed the film’s initial November, 2019 release.

It was worth the effort going by the audience reaction at the media preview – a theatre full of other fans, most older and some younger than my son. They loved all the homages paid to the original video games, as well as the assortment of cheesy jokes and well-crafted zingers incorporated into the story.

The plot is pretty simple. The world’s speediest – and sometimes bratty – hedgehog is on the run from power-hungry villains, and ends up on Earth via a portal opened by the golden rings in his possession. Sonic pays heed to his friend Longclaw’s final advice: Never stop running. He does exactly that to escape detection in Green Hills, Mont., the small town he adopts as his home.

Unbeknownst to local sheriff Tom Wachowski (James Marsden) and his veterinarian wife, Maddie (Tika Sumpter), he also adopts the couple as his friends. He observes them from a distance, becoming an invisible part of their routines, such as watching TV reruns of Keanu Reeves in Speed – natch.

Except one day, Sonic realizes just how alone he is, and starts running at a blazing speed. He creates a power surge that knocks out the local power grid. This brings the maniacal Dr. Robotnik (Jim Carrey) into Sonic’s – and Tom’s – orbit. And the chase begins, featuring a road trip, robotic misadventures and an ultimate showdown between Sonic and Dr. Robotnik.

To say my son is a fan is an understatement. He often uses his limited video-game time to play Sonic. When we’re walking to school – or anywhere really – he will often say, “Look how fast I can go!” before getting into the Sonic pose – bent forward, two hands behind his back – and shooting off, arms pumping as fast as his legs.

For fans like him, the movie is unequivocally “AWESOME!” It cleverly incorporates aspects of the video games, down to some of the sound effects and melodies. The simple storyline finds a way to adapt the games’ characters and themes, by adding universal concepts such as friendship to the original games’ tension between nature and machines.

Critics like me might point out leaps taken by the script for comedic purposes. Why does Tom agree to help Sonic so quickly, other than maybe an innate dislike for Dr. Robotnik’s lunatic villainy? What exactly is Dr. Robotnik’s relationship with the U.S. military? Why does Tom’s sister-in-law mistrust him so much? Clearly I am not the target audience. Nevertheless, even I was chuckling occasionally – especially when one-liners such as “Is The Rock the President?” landed or Sonic played an epic baseball game. Plus, there’s Cancon to appreciate. The movie was partially shot in beautiful British Columbia. And Carrey brings a madcap mashup of his previous avatars to this turn as Dr. Robotnik.

My kids were still glued to their seats when the credits rolled. Much to their delight – and other fans in the audience who were whooping in approval – the makers of Sonic The Hedgehog had taken a page from Marvel: During the credits, there were two vignettes that showed Dr. Robotnik looking more like Eggman (which Sonic aficionados will point out is the original name for the villain) and Tails, Sonic’s sidekick. People could be heard chanting, “Sequel!”

“If there’s a Tails sequel, I’m definitely going for it,” my daughter said the minute we stepped out of the theatre. Meanwhile, my son has already RSVP-ed to watch Sonic The Hedgehog at his school friend’s birthday party next week. “I can’t wait,” he reminds me every other day, before zooming off.

Sonic the Hedgehog opens across Canada on Feb. 14

Film Review
French romance Portrait of a Lady on Fire will ignite every flame you might have
February 14, 2020 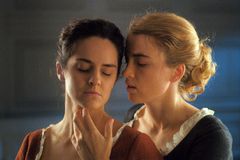