With seven films under his belt before age 30, Quebec director Xavier Dolan is an artist apparently unconstrained by chronological time. Take not only his age-defying resumé, but also his much-delayed English-language debut, The Death and Life of John F. Donovan. It begins in the present with a contemporary reporter using a cassette recorder of a style not seen inside a newsroom since the 1990s; the 30ish man she is interviewing recalls events that occurred a decade before – when he was only 11. Those events concerned his correspondence with the celebrated television star John F. Donovan, a tortured gay actor consigned to the depths of the closet – in New York in 2006.

Most of John F. Donovan makes little sense, chronological or artistic. It’s a self-indulgent project by a famous gay artist that does not probe the intersection of homosexuality and celebrity so much as it whines about it.

The story, from a script on which playwright Jacob Tierney assisted Dolan but apparently not enough, is awkwardly framed by that interview. Thandie Newton plays the journalist – and she plays her well, making the most of a limited scenario. She’s a foreign correspondent asked to pinch hit on an interview with Rupert Turner (Ben Schnetzer), the author of a memoir about his correspondence with Donovan. The journalist is given this unwelcome assignment over a pay phone – because she can’t get reception on her cell – in a hotel in Prague. Why she or Turner might find themselves in a Prague hotel, where he conveniently overhears her sneering at the assignment, is never explained.

Dolan had notorious problems finishing this film, a prolonged process in which a performance by Jessica Chastain was simply jettisoned, and the viewer has to wonder if missing narrative links are littered across the now-metaphorical editing room floor.

So, Dolan proceeds in flashback, to Turner’s childhood in London and Donovan’s fame in New York. The young Rupert, played with verve by a mouthy Jacob Tremblay, is an aspiring child actor from America much bullied in his new British home: He has been unhappily transplanted to London by his mother, a failed actress who wants to bring him geographically closer to his father. Little Rupert doesn’t get it, but worst of all, Natalie Portman, consigned to playing his mother in an unflattering wig, doesn’t get it either.

She is being asked to produce another of the interfering mothers in which Dolan has specialized since his semi-autobiographical J’ai tué ma mère (I Killed My Mother) and she’s confused by the baddie role. Tremblay, after all, is rather sweet. So is Rupert. Why would a parent be so deeply uncomprehending of this young actor – you can decide whether that’s Rupert, Tremblay or Dolan himself – as to cut him off from his fledgling career?

Anyway, over on this side of the pond, where I suspect we may have travelled only because the film is a Canadian-U.K. co-production, his secret (and utterly anodyne) correspondence with a famous TV star gets stolen by his classmates, thereby triggering a tabloid scandal. The details are opaque, but perhaps all a viewer needs to remember is that this occurs post-Michael Jackson.

Meanwhile, Susan Sarandon has a lot more luck playing another smothering mother because she decides to go for the laughs. She is the verbose, affectionate and occasionally drunken parent of John F. Donovan himself and things definitely get brighter when she’s on screen.

As an explanation for Donovan’s extreme closetedness, however, she is utterly insufficient. I am prepared to believe that a rising actor with a loving if difficult family in the early 2000s in New York would be as firmly closeted as Rock Hudson in the 1950s, but I’m not prepared to believe it’s still society’s fault. There has to be some particular neurosis, some back story, if I am going to weep for John F. Donovan.

And there, unfortunately, lies another significant problem. Kit Harington’s performance as Donovan is flaccid, reducing the celebrity to a cipher. How did this man decide to use a beard? (Emily Hampshire plays a friend, girlfriend or perhaps wife – it’s never clear – who cheerfully accompanies him down the many red carpets.) And where is the generosity it would take to enter into correspondence with an 11-year-old fan? With the exception of a few moments enlivened by Jared Keeso playing his sympathetic brother, Harington mainly looks morose: Jeee-sus it’s difficult being famous and gay. When a promising new lover dumps Donovan, declining to be anybody’s “secret crush,” I wanted to cheer.

In the weird finale, Michael Gambon suddenly appears to the depressive Donovan in the role of a Yoda-like short-order cook. Gambon’s got a good speech – as does Kathy Bates as Donovan’s publicist proclaiming she won’t lie for him – but what it has to do with the mess in which they are embroiled is never clear.

Maybe Chastain has all the answers.

The Death and Life of John F. Donovan opens Aug. 23.

Kit Harington on Jon Snow, fame and privacy, and The Death and Life of John F. Donovan Subscriber content
August 20, 2019 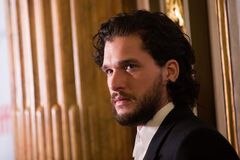 Xavier Dolan on the long life, death, and resurrection of The Death and Life of John F. Donovan Subscriber content
August 15, 2019 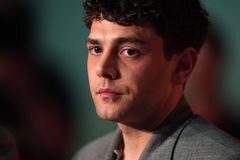