It’s hard to make a film about the middle of anything, especially a long marriage. The presumption is that if a couple has stayed together long enough, there’s no drama left. The new British film Ordinary Love solves its drama problem by choosing from Tom (Liam Neeson) and Joan’s (Lesley Manville) long marriage the year that Joan is diagnosed with and treated for breast cancer. But don’t be fooled. Although writer Owen McCafferty and co-directors Lisa Barros D’Sa and Glenn Leyburn – themselves a married couple – get all the cancer stuff right, Joan’s disease isn’t the point. The point is to take a good, long look at that rarest of cinematic subjects: the good, long marriage. Manville and Neeson make a brilliant and – thank you, directors – age-appropriate couple. (Opens Feb. 21)

Not much happens, and it doesn’t all quite make sense, but you will leave moved and terrified. After premiering at Sundance in 2019, the second film by German co-directors Veronika Franz and Severin Fiala follows a similar formula as their breakthrough Goodnight Mommy. The Lodge is another contained chamber piece about two children resentful of a woman who is trying to take the place of their mother. (Opens Feb. 21)

Just to get it out of the way – the phrase shubh mangal saavdhan is a mantra of sorts, uttered to announce a marriage. It’s also the title of an earlier movie written by Hitesh Kewalya, in which Ayushmann Khurrana played the lead role of a man dealing with erectile dysfunction, much to the chagrin of his fiancèe, played by Bhumi Pednekar, with a squabbling family providing the backdrop of comic relief. Now Kewalya’s revisiting the title, in a way. But this time he’s not just the writer. Shubh Mangal Zyada Saavdhan, a Hindi film with English subtitles, is also his directorial debut. The plot is entirely different, while the title is slightly tweaked. The word zyada means extra. And – the way kids use the word these days – is one way to describe the film. It’s just so extra in depicting a story about two gay men in love, and seeking validation from their family. It’s both its drawback and delight. (Opened Feb. 20)

The Call of the Wild

The Call of the Wild heeds a call of the times. It offers a rather multicultural representation of the 1890s Klondike Gold Rush compared with other Hollywood movies set in that time period. Does this latest version of a popular adventure novel actually strike gold, however? That depends on what you went looking for. If you’re after an action-packed adventure film set against turn-of-the-century Canadian wilderness, you’ll likely come away disappointed. If you’re looking for a good ol’ yarn – the kind where bad guys sneer, good guys sigh and a big dog rescues everyone and finds its true self in the process? Jackpot! (Opens Feb. 21)

Two shows and a film to watch on Crave, Amazon Prime and CBS All Access this weekend.

This weekly guide was compiled by Lori Fazari, with reviews from Aparita Bhandari, Chandler Levack, Johanna Schneller and Lara Zarum. 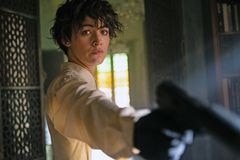 Film Review
Opening in theatres this weekend: Harley Quinn gets her revenge in Birds of Prey, and the #MeToo-inspired The Assistant
Subscriber content
February 6, 2020