After her husband died in 1961, leaving her with three young children to support, Rita Lakin found a secretarial job at Universal Studios. When the English-lit grad realized screenwriting paid more than the steno pool, she started reading scripts and made her way into the business with a sample script for Dr. Kildare. Over 30 years she worked her way to executive producer, writing hundreds of television episodes, miniseries and movies. Lakin, now 85, has a new memoir, The Only Woman in the Room, that reflects on her Hollywood career during a time when there were few top female writers. The Globe and Mail talked with Lakin by phone from her home in California's Marin County.

After all this time out of Hollywood, why did you want to write about it?

Somebody said to me I should, because I had such incredible adventures. And to reach out to the women of today, that they should continue to push for equality. I saved everything. Every script I ever wrote. All the TV Guides, reviews, story revisions, back-and-forth memos. … I still have my kiss-off letter from Aaron Spelling, which I had found on my front step in a rain puddle. That's how it was delivered. And when I started reading that three years ago, it all came back to me.

What do you watch these days?

It runs a gamut – Breaking Bad was an absolute masterpiece. Ray Donovan is one of my favourite shows – it's Ann Biderman and I wonder how the hell she ever got it made, and that it's a show I would watch because it's so filled with unpleasantness. … I used to say that I'm not going to a movie to watch people that I would walk across the street to avoid. That was my rule of thumb, but so many things in television are [unpleasant] now. I see the credits on some of these really tough, tough shows, and women are writing them! They're not being written as the women of my era – they're as able to handle an uzi as men. They aren't just the little wife sitting at home, like I did and every other wife in America did with a cocktail in our hand when he walked in the door.

Streaming and other distribution methods have made it easier for challenging shows and films to find an audience and make it to the screen intact, unlike some of your–

No – oh God, what Aaron Spelling would have done to Ray Donovan! He would have made him handsome and cute and the women would be sexy and gorgeous, and there wouldn't be anything interesting. But to give the devil his due, he did do a show called Family. It was very un-Aaron Spelling.

It's definitely not one of the ones mentioned in the first dozen Spelling-Goldberg shows anyone talks about.

But it was so damn good. The exception that proves the rule, that Aaron could do something else besides those T-and-As that he was known for. Yet I had my show thrown off the air! Nightingales was literally thrown off the air after what they did to it.

That experience made you leave the business.

I begged them, 'Don't turn nurses into whores. You cannot do that.' But they insisted they knew what they were doing, that no one's sexier than a nurse with a skimpy outfit. And it was directed by Mimi Leder. I never could understand why she wasn't horrified by it. There were outraged town halls. Talk-show host Phil Donahue did a show about it. It would have been nice if Donahue had bothered to call me – I would have told him my side. But he didn't. It was all nurses, ripping Nightingales to shreds.

To be fair, showrunners weren't the same kinds of celebrity as they are today. What would you have done differently?

I would have hired more women writers. And women directors. I'm more aware now but back then we didn't question the fact that there weren't other women. In the beginning if you wanted to be a writer, you usually had a husband [and were part of a writing team].

When you started in the 1960s, women made up only 4 per cent of the Writers Guild of America; that number you mention is still now only around 22. What do you think of the fact that women are the head of many hit shows today – Michelle King and husband Rob on The Good Wife, Barbara Hall on Madam Secretary, Lena Dunham on Girls, Jenji Kohan on Orange Is the New Black.…

And they're women's shows. Not "women's shows" – but certainly stories about complicated, sometimes strong and powerful women.

Was there something specific you think female writers brought to that new era of television drama?

We do. We did, when we were allowed! [laughs] – David Victor [producer of Dr. Kildare] was an amazing person, and wanted shows with feeling and emotion, so he hired women. We bring a sensitivity that is alien to the male writers – they have a different kind of sensitivity – somebody's going to kill me for saying this, but it's not the depth I think women can bring. Especially to women's parts but to all characters.

That makes me think of The Fourth Sex, the transgender-surgery episodes you wrote for Medical Center.

I had no idea that was pioneering until later. It was a very sensitive subject; a lead character [Robert Reed] is dealing with his wife and his son. Somebody else might not have dealt with it that sympathetically. We were introducing much more nuance than there was on television at the time, we really were. All of a sudden, transgender is the hottest thing around – Transparent, The Danish Girl. I had never even heard of it in 1975 but the producer had the clout and wanted a topical story. He tackled one brave topic after another and because he was a man with a successful show, he had power and could do any damn thing he pleased.

The Sony Pictures e-mail hack last year revealed information about a female studio executive who earned $800,000 less than her male counterpart, and top star Jennifer Lawrence discovered she was paid less than her male co-stars. In an open letter/essay about the wage gap last month, Lawrence admitted she hadn't negotiated toughly because she didn't want to seem stuck-up or spoiled.

Yes, she said: 'Could there still be a lingering habit of trying to express our opinions in a certain way that doesn't "offend" or "scare" men?'

It's still going on. There you have it. It's what I thought back then – that if you're a woman, you don't make waves. The more things change, the more they stay the same. I used to say, 'Kill them with kindness.' Ha! I think the women who aren't 'nice' are doing much better. I'm sure they are! Shonda Rhimes, for example, she doesn't take any crap from anybody, from what I understand. And Scandal has me riveted. If I still wrote, I'd love to write for Scandal.

Canadian drama Below Her Mouth may be first film with all-female crew
November 6, 2015 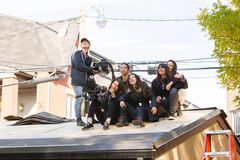 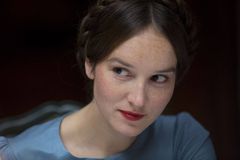