When John Fell Ryan, one of the "interpreters" of Stanley Kubrick's The Shining featured in the documentary Room 237, admits that "I've been trapped in this hotel forever. I dream about the place," you don't get the sense he really wants out. He loves being lost in the Overlook Hotel.

Among other things, director Rodney Ascher's Room 237 is an account of a certain kind of especially immersive cult enthusiasm, the kind where you can plunge so deeply into a movie you feel like you're swimming in it, where the act of watching is also an entry to the virtual realm.

This kind of cult experience is really only about 30 years old. Prior to that, even the most fetishistically followed cult movies – The Rocky Horror Picture Show, say, or Casablanca, Night of the Living Dead, The Song Remains the Same or Harold and Maude – had to be experienced in real time, on a movie or TV screen. That put a limit on our degree of immersion. We may have watched so many times we had dialogue and musical score memorized, but we were still really just watching. The VCR changed all that. With its arrival and home invasion in the 1980s, viewers took control. Once we could freeze the movie and rewind, watch what we wanted to watch as many times as we wanted, the nature of movie cultism was radically transformed.

The VCR made everybody like the photographer in Antonioni's Blow-up (1966) – itself once an object of cult veneration – who studies enlargements of shots he took in a park for traces of murder. Or maybe the instant-replay engineer of a sports broadcast, or one of those conspiracy trackers who studied frame blow-ups of the Zapruder film.

Like a good many cult movies before it, Kubrick's The Shining was something of a dud on first release. Reviews were largely indifferent or dismissive, box office was meagre and it folded quickly in the summer of 1980. But with its release on videocassette some years later, the movie began to take on a robust afterlife, as people took it home and watched it over and over (and over) again, with VCR remote in hand. Indeed, only a year after its release, ABC journalist Bill Blakemore published the first close study, hidden-meaning interpretation of the movie (included in Room 237) as a veiled account of Native American genocide, a reading only arrived at as the result of meticulous, frame-by-frame scrutiny.

The VCR was the ultimate geek enabler, and Ascher's movie is essentially a fabric woven of such deep readings. As it follows its various interpretive threads – The Shining as Apollo 11 moon-landing metaphor, The Shining as Holocaust metaphor, the Overlook as architectural paradox, etc. – it conducts its own form of pause/freeze/rewind, a movie whose form mirrors our own cult engagement and thereby merely adds another layer of irresistible immersion. It speaks in the language of post-VCR home viewing: "Did you see that? Right there? No? Okay, I'll back up and freeze. There! See it now?"

One of the trailers for Ascher's movie echoes one of the signal moments in The Shining by showing a VCR releasing a torrent of blood from its cassette dock, a perfect metaphor of its own. The Shining was, of course, not alone in its cult certification via VCR-era recovery. Blade Runner became a pause-and-rewind home-viewing geek phenom after tanking at the box office, as later did Repo Man, The Big Lebowski, The Shawshank Redemption and Fight Club. By the time we reach the final title, we've crossed over into the DVD age and dawn of the Internet era, by which point the process of home-cooked movie cultdom had not only redefined what makes a cult movie, but allowed us to virtually remake them. YouTube is a vast repository of DIY movie mashups, retro-fits and fan interventions.

Making forensic investigators of everyone was only one aspect of the VCR's reformulation of movie cultism. The other is the nature of the cult itself. We are no longer the "we" we once were. With the displacement of the cult movie from the rep house, midnight circuit and campus film club to the home, we became a community of solitary enthusiasts. In fact, one of the formerly defining characteristics of the cult movie was the distinct way it played with a live audience: encouraging talkback, dressing up, conventions, fan-club memberships. Now we do our communicating with the virtual community and the viewing on our own.

The curious thing is, as fundamental as this shift may be, it actually deepens the potential for immersion: Now we can probe more deeply than ever, study more closely, get lost like Room 237's John Fell Ryan in the labyrinth of the Overlook. That we no longer enter these movies with a group might actually even enhance our experience of them. Obsession always prefers a private room. 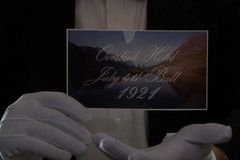 TIFF movie review: Room 237
September 9, 2012
Follow us on Twitter @globearts Opens in a new window
Report an error Editorial code of conduct
Due to technical reasons, we have temporarily removed commenting from our articles. We hope to have this fixed soon. Thank you for your patience. If you are looking to give feedback on our new site, please send it along to feedback@globeandmail.com. If you want to write a letter to the editor, please forward to letters@globeandmail.com.
Comments