If you wanted to see the power of a Hollywood star made manifest during the Toronto International Film Festival, all you had to do was visit the fourth floor of the Ritz-Carlton. Journalists spent most of our week prowling the corridors of other hotels, thrilled to be offered a free pack of gum. But last Saturday I did interviews for Drive, the moody drama that opened yesterday, and the star of Drive is London, Ont.'s own Ryan Gosling. Gosling's interview was at the Ritz.

As the elevator doors opened onto the executive floor, I was bathed in a blaze of warm light. It was like entering heaven, with five-star catering. Silver serving dishes held filet mignon on polenta with porcini mushrooms, asparagus and fresh-pea risotto, and orange bittersweet single-origin chocolate tarts. The ladies' room smelled expensive: Small wooden maple leaves, impregnated with scent, were tucked discreetly into each stall. The U.S. movie studios were running the show, and the Ritz was putting out for them, proving that downtown Toronto could handle the Clooneys, Pitts and Goslings just as well as Yorkville ever did.

But Gosling's power extends far beyond the lavishness of his film's junket. He's a hot commodity in Hollywood right now, and a rare one – a heartthrob with acting chops who can open a film. Clooney and Pitt are stars, but they're not always box office. Tom Cruise's movies have collectively earned $6-billion; Hollywood is hoping Gosling, 30, is the next Tom Cruise.

With that kind of heat comes coddling, both of the kind that doesn't matter (crab-and-quinoa salad), and the kind that really, really does: getting to make your movie, your way. Gosling is very much the driver of Drive, both on screen and off. In making it, he used his power to a near-miraculous effect that bodes well for his future.

Eight years ago, Universal bought a slim novel about a loner stuntman in Los Angeles who becomes a crime getaway driver. It was poised to be a typical Hollywood car movie, a possible franchise à la The Fast and the Furious. The studio liked Gosling for the lead, and producer Marc Platt told him, "I'll get behind any director you want."

This is where the miracle kicked in: Gosling wanted Danish art-house director Nicolas Winding Refn, the self-described "fetish filmmaker" of the Pusher trilogy, Bronson and Valhalla Rising. The two bonded while driving around L.A. by night listening to music. One night, REO Speedwagon's pop hit Can't Fight This Feeling came on the radio, and Refn started crying.

"Nicolas and I creatively copulated, this movie-idea baby was born, and now we had to raise it," Gosling recalls, sitting at a round table and leaning forward earnestly. He is wearing a cream-colored fisherman's sweater and a thin gold chain around his neck, and speaks softly but quickly, in anecdotes rife with details.

"When I was a kid, I saw First Blood," Gosling continues, his words gaining momentum. "The movie put a spell on me. I thought I was Rambo. I filled my Fisher-Price Houdini kit with steak knives, and I took it to school the next day. I threw them at all the kids at recess. Thank God I didn't hit anybody, but I was suspended. My parents wouldn't let me watch violent movies any more. So I understood this character on a certain level when I read it. I thought: This is a guy who's seen too many movies. He's confusing his life for a film. He's mistaking himself for an action hero. He's lost in the mythology of Hollywood."

Refn's goal was to fuse his own European sensibility onto an American genre picture. He's an eccentric – imagine Dwight from The Office as a Dane. In a separate interview, he said things to me like, "My influences for Drive were the Grimm's fairy tales and the movie Pretty Woman," and, "When I make a film, I try to figure out which piece of music it would be. It gives me ideas, because I don't do drugs any more."

He was nervous about making his first Hollywood movie, he said, in a clipped Danish accent, "because I didn't have the creative control that I'm used to. Or at least, I had to deal with more people around it. But I always knew Ryan would protect me. The same way Lee Marvin protected John Boorman on Point Blank, or Steve McQueen with Peter Yates on Bullit." (If you think the comparisons to Marvin and McQueen are accidental, think again.)

Protect Refn, Ryan did. "Nicolas is unique," Gosling says. "There's nothing conventional about the way he makes films. It took a lot of explaining to the crew, and to the people involved with the film" – the money men – "that there was a method to this madness. And sometimes it was madness."

Before, during and after the shoot, Gosling, his co-stars Albert Brooks, Bryan Cranston and Carey Mulligan, and screenwriter Hossein Amini, camped out in Refn's house in the Hollywood Hills, ordering in food, pitching out character ideas and lines of dialogue. "There were toys and shoes all around. Nicolas's kids would be upstairs. He'd excuse himself to give his daughter a bath," Cranston remembers. "It was unorthodox, certainly, but freeing."

Mulligan moved in for a few months. Gosling came and went with his own key. His idea for his dialogue was always the same: less, less, less. He felt he could "say more by saying nothing."

He did need to reassure the money men, though. "Suddenly, people are coming to set and no one's talking, we're just looking at each other. For hours," Gosling says. "And Nicolas is going around with headphones on, crying all day. We're doing 50 takes while he adjusts some tiny detail in the corner of the frame. He's hugging me for 10 minutes before we shoot, because he doesn't feel that I'm relaxed enough. And you have to explain all that at some point. You have to reassure everyone that it's going somewhere."

Refn shot in chronological order, so he could keep "evolving" the script as he went. He cast Brooks as a villain – something no other director would do, Brooks said to me this week – and then had him do so many takes of a scene where he chokes a neighbour that the victim actually lost consciousness. "I thought he died," Brooks recalled. "When he came to, Nicolas said, 'Are you okay?' He said, 'Yeah.' Nicolas said, 'Let's do it again!' " The scene didn't make the final cut.

They'd edit each day's rushes until the editor would fall asleep, and then Gosling and Refn would get in the car and drive around some more, "go to a diner, talk about movies and life," Gosling says. "And that would affect what we shot the next day, somehow. It was a constant process of discovery. We were always chasing that moment in the car where the movie was born."

"The film became a reflection of what the process of making it was like," continues Gosling, who has two more films on tap with Refn, including a remake of Logan's Run set in Bangkok.

"People who've seen it are saying, 'There's silence in this movie!' They're applauding something that shouldn't be abnormal, but it is," Brooks says. "Great art is supposed to be weird. But when things cost $150-million, they don't want them to be weird." He pauses. "This could have turned out to be a mess. But you take your chances."

Vanilla-bean pannacotta with fresh blackberries is very nice. But Gosling's use of his power is a lot more interesting. 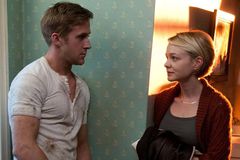 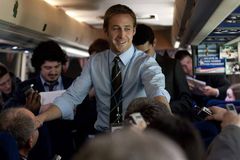