Twelve years in creation, 25 days to shoot, one year to promote: Blue Valentine, starring Ryan Gosling and Michelle Williams as a couple in a disintegrating marriage, is a film aged and distilled over time. Gosling personally worked on it for four years, including a shoot broken into two parts, separated by a one-month interval in which the actors played house to simulate the passage of married life. And now comes the final stage in the long process - talking about it.

Gosling is not what you might expect. For all his reputation for a brooding Method-like intensity, his semi-Bohemian downtown Los Angeles lifestyle and the somewhat swaggering character that comes across in U.S. magazines and TV interviews, he's neat, thoughtful, polite - very Canadian really - as befits a man who grew up in smaller cities in Ontario such as London, Cornwall and Burlington, and remains close to his sister and mother. The one thing that about him that lives up to his reputation is his conspicuous intelligence. Few actors, for example, have as clear a sense of the purpose of an interview.

"As an actor, I see my job as like a reporter's. I do the research and try to embody this person as objectively as possible, or perhaps sympathetically-objectively," he says.

"Then comes the process where you do interviews and are asked questions about it, and you have to change perspective. While my opinion is as valid as anyone else's, it's really more interesting what the audience thinks than what I think. So, you walk a fine line. You want to say enough to make people interested in seeing the film but not so much that it will temper their experience of watching the film. I don't want my voice in their heads."

Gosling says that he even picks roles "very carefully - partly because I'm thinking about what I can talk about when we reach this stage. For the audience, the movie lasts a couple of hours and maybe longer if you're lucky. For the actor, it's with you the rest of your life. Not to be trite, but it's like taking a lover. You may not marry the person but they're always going to be part of your life."

Recently turned 30, Gosling is a long way from his teen fame as a Mickey Mouse Club cast member with Britney Spears, Justin Timberlake and Christina Aguilera. It's been a decade since he made The Believer, about a Jewish kid turned virulent anti-Semite, which started earning him a reputation as one of the best actors of his generation. And apart from a foray into heartthrob territory with The Notebook (and a spot on People Magazine's 50 Sexiest Bachelors list), he's held onto his standing as a serious actor with films that include the Oscar-nominated Half Nelson (he was the first Canadian nominated for best actor in 60 years) and Lars and the Real Girl, about a simple-minded man who falls in love with a plastic love doll.

Gosling, known to immerse himself in his roles, slept beside his plastic co-star while he was making that one.

Blue Valentine was another film that blurred the line between acting preparation and sustained social experiment. While Gosling was involved in creating his character with director Derek Cianfrance for four years, his co-star Williams worked on her part for six. And although Cianfrance wrote 66 drafts of the script, he essentially threw it away when shooting began. The actors didn't rehearse. They began acting as a couple on camera (they were forbidden from talking about their roles together until then). Halfway through the film, the shooting stopped, and they moved in together to simulate the six-year interval between the two sequences.

"Maybe we went overboard," says Gosling. "I wouldn't know because I've never worked this way before. It was a unique process because we had so much time to prepare. When it came time to start acting together there was a sense of release every time we got to do a take because there had been so much buildup. You can feel that in the texture of the movie, I think."

Gosling doesn't have a specific working method: Sometimes a character is built from the inside, sometimes from the outside in. Of Dean, his character in Blue Valentine, he says, "it really wasn't so much a creation. I've met a lot of Deans, though I rarely see them in film. To be honest, with the older Dean, I think I subconsciously began to imitate the director."

The imitation doesn't seem to have been all that "unconscious." Gosling borrowed Cianfrance's clothing for the part. And after meeting Gosling at the Toronto International Film Festival, I met Cianfrance - who with his eager, self-deprecating manner, checked cotton shirt and jeans, and receding hairline, is a dead ringer for the older Dean.

The two men have been friends for several years, and while Cianfrance is as naturally effusive as Gosling is careful, they share an obsessive streak.

"Ryan's one of the smartest guys I've ever met," says Cianfrance. "He's great at figuring problems out. If, you know, you wanted to know how to be a skateboarder, Ryan would study it all night, learn the moves and by 4 o'clock the next afternoon look like a semi-champion."

An amateur filmmaker since he was 13, Cianfrance studied avant-garde cinema under Stan Brakhage and Phil Solomon at the University of Colorado, and made an acclaimed first feature, Brother Tied, back in 1998. After that he wrote his first draft of Blue Valentine but the story of a marriage collapsing wasn't an easy sell. He acknowledges John Cassavetes as "a huge influence," along with Pier Paolo Pasolini, Francis Ford Coppola, Woody Allen and Ingmar Bergman, but "over the last 12 years I've been working on this, I'd say the biggest influence was real life."

As a child, Cianfrance had two great fears: "One was that the nuclear bomb would fall. The other was that my parents would get divorced. Then they did break up, and I was devastated. I looked in books, in films, and couldn't find any representation of what that experience was like. I felt like I had to make this film to move on in my life."

He describes Blue Valentine "as a series of duets: between a man and a woman, between youth and adulthood, between the past and the present, between the head and the body. So I wanted two time periods and two different shooting styles."

The first part, when the couple is falling in love, was shot in Super 16mm film, all handheld, with both actors in the frame most of the time. The second part is shot digitally on two RED cameras, with really long lenses: "Essentially we used the kinds of lenses they use to shoot lions on safari, where they can keep so far away the lions can't eat them. Love has abandoned them and, in a way, so did the cameras."

Cianfrance admits the biggest experiment of the film - the month-long mock marriage - almost didn't work. Williams, Gosling, the little girl who plays their daughter and Cianfrance rented a house in Scranton, Pa. He made the couple live on a budget in accord with their characters' incomes. They shopped and cleaned house together, and had birthday and Christmas celebrations. Gosling suggested they might want to wait six years before shooting Part 2.

"Everyone loved each other too much, and we didn't want to move to the second part. I was seriously thinking of calling the film Valentine and ending it there, but it wouldn't be true to the material. At one point, I said, 'Okay we've got to make a sacrifice and destroy this thing.' "

The cast went to a local store, bought $200 worth of fireworks and lighter fluid and burned the prop wedding photo, until nothing but a molten heart-shaped frame surrounded the wedding kiss.

"After the fire," recalled Gosling, "We went into our separate corners and came out fighting."

The scenes of intimacy in a hotel that almost earned the film a NC-17 rating were among the most difficult, physically as well as emotionally.

"We shot two days for the shower scene," says Cianfrance. "At first it's self-conscious and awkward and a little cutesy. By the ninth hour, it's uncomfortable and exposed and vulnerable, and a whole new set of emotions come into play. This is why I love actors. They're brave where most of us are cowardly. They'll show the ugliness that the rest of us spend our lives trying to hide.

"Ryan was sitting with his mother at the premiere watching that - can you imagine? That's my idea of a brave man." 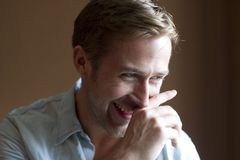 Blue Valentine: A beautiful portrait of a doomed marriage
January 7, 2011
Follow Liam Lacey on Twitter @liamlacey
Report an error Editorial code of conduct
Due to technical reasons, we have temporarily removed commenting from our articles. We hope to have this fixed soon. Thank you for your patience. If you are looking to give feedback on our new site, please send it along to feedback@globeandmail.com. If you want to write a letter to the editor, please forward to letters@globeandmail.com.
Comments