Vancouver-based author Ryan Knighton is by no means a religious or spiritual person, but he is in another way uniquely qualified for the very hot screenwriting job he has landed. Knighton, 40, will write the screenplay for Universal Studios's adaptation of the giant bestseller Proof of Heaven: A Neurosurgeon's Journey into the Afterlife.

The memoir debuted at the top of the New York Times bestseller list in the fall and retained the No. 1 position for weeks (it's currently No. 2). In it, Eben Alexander, a Virginia-based neurosurgeon, recounts his 2008 near-death experience. At 54, he contracted a rare strain of bacterial meningitis and fell into a coma. He lay near death for a week. When he woke up, he had an amazing story to tell: He had seen heaven.

Even if the story has its skeptical detractors, the book has been a publishing phenomenon, and seemed a natural for a film adaptation. But the agent representing the book for film rights initially was unable to secure a deal, as Knighton tells it, because the studios – despite keen interest – were having trouble seeing a movie in it.

That agent also happens to be Knighton's screenwriting agent, so he asked Knighton if he would check out the book, which Knighton had not yet read. Two weeks later, Knighton was on the phone with studios in L.A., offering a thumbnail version of what he thought the movie would feel and sound like. A couple of weeks after that, he was in Los Angeles, with Alexander, pitching the project in studio boardrooms.

If it felt strange sitting next to Alexander, describing the man's story to Hollywood, Knighton has a very intimate perspective on the matter. On his 18th birthday, he was diagnosed with retinitis pigmentosa, which would lead to total blindness. He knows what it's like to have your world rocked by an unexpected medical bombshell and emerge from it, altered.

"I do recognize something in this book in a very distant way," says Knighton, sitting in his East Vancouver living room. "This is a guy who went into a coma and came out something else on the other side. And in my own distant experience with late-onset blindness, I went through something that I recognize dramatically…. I remember very deeply that process. And so [Eben] and I have had very interesting conversations about what it's like to really come out and feel yourself a different person, in his case a radically different person. As I keep joking to him: You're the only ghost I know."

With that personal foothold into the story, Knighton devised the bones for an adaptation, focusing not just on those seven days Alexander spent near death in the hospital and his journey to the Core, as the doctor calls it, but also on what happened to the man post-medical-miracle recovery. He had long conversations with Alexander about that, and it became a key element.

"I was more curious about his life after, because he doesn't really [write in the book] about what happened to him after the coma. Coming back and what it did to his life, his profession and his family and everything. And that sort of gave the second engine in the story that it needed."

Knighton has written two memoirs of his own (Cockeyed: A Memoir and C'mon Papa: Dispatches from a Dad in the Dark) and written other screenplays, but has yet to have a film produced. So he felt like he was a bit of a long shot. On the other hand, he is extremely thoughtful, articulate and funny – and can with ease captivate a room – not just the classrooms at Capilano University where he teaches English literature and creative writing, but also, it seems, a boardroom of studio executives who spend a lot of time listening to project pitches.

"It's funny because it's an incredibly blind person's medium, because what you're doing is you're describing a picture to people who can't see it. And trying to make them feel what it would be like to see it."

The final pitch – the one to Universal – is the one that led to the deal. Disruption Entertainment's Mary Parent (Pacific Rim) and Cale Boyter (Wedding Crashers) will produce.

Knighton has not yet started writing the script, but as he develops his ideas, he plans to spend time in Lynchburg, Va., with Alexander – witnessing him work, meeting his family. He's also thinking about a lot of different films: Awakenings ("a guy returns to a world he doesn't recognize"); Contact ("the elements of sci-fi swapped out with a medical thriller for this one"); A Beautiful Mind ("how does a marriage survive when one of the people in that marriage radically changes?"); even, in some ways, Close Encounters of the Third Kind ("that's dad and his wacky quest").

"It has a lot of similar DNA to those movies," says Knighton. "And I think there's a real medical thriller in this story," Knighton says. "The infection itself and the fact that they thought it was this very deadly antibiotic-resistant E. coli. For a while there they thought he brought the black plague into the United States. You can't get stakes much better than that for a movie."

This American Life gives Canadian story a voice - and visuals
May 9, 2012 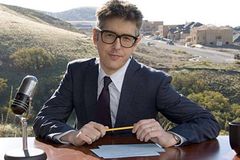 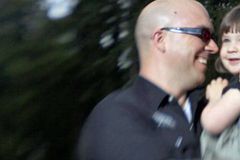