The most revered American filmmaker working today is also one of the most misunderstood.

Everyone knows Martin Scorsese – few auteur filmmakers have achieved such a household-name status – but the artist's full breadth of work, spanning over five decades and 30 films, is often not given the full consideration it deserves. He is the man who made Goodfellas, and the director who won the best picture Academy Award for The Departed – a filmmaker forever associated with crime and violence and guns and back-alley death.

His latest masterwork, though, passed through cinemas largely unnoticed: Silence, the story of two 17th-century Jesuit priests on a mission in Japan to recover a missing mentor, made back less than half of its budget at the box office. The film is the third of what could be constituted as Scorsese's unofficial "Faith trilogy" along with The Last Temptation of Christ (1988) and Kundun (1997) – the three films are playing the TIFF Bell Lightbox in chronological order on May 14, 16 and 21, respectively. Despite having three bankable Hollywood billings in Andrew Garfield, Adam Driver and Liam Neeson, Silence's concern with spiritual and existential searching and discovery without any ties to gunplay and wise-cracking gangsters makes it out of fashion for contemporary audiences, and yet another one of Scorsese's films that doesn't fit inside the box that pop culture has inadvertently put him in.

Scorsese's most successful films have become classics that will be remembered as long as movies themselves are known, but some of his greatest works have been neglected. Whether it's Alice Doesn't Live Here Anymore (1974), a tremendously moving story about a newly widowed mother hitting the road with her young son; the experimental musical New York, New York (1977); the palpable paranoia of After Hours (1985), which follows one man's never-ending night of mishaps and wrong turns; the formal exuberance of his sublime Edith Wharton adaptation The Age of Innocence (1993); or the unexpectedly rich family film, Hugo (2011). Of course, there are also his documentaries, which include well-known rock docs The Last Waltz (1978) and Shine a Light (2008) but also his cinema advocacy films A Personal Journey with Martin Scorsese Through American Movies (1995) and My Voyage to Italy (1999), not to mention lesser known mid-length gems Italianamerican (1974) and American Boy (1978), which stand among his finest.

This isn't all to say that films like Mean Streets and Taxi Driver aren't deservedly touted as classics but, if we can borrow his famous quote, "Cinema is a matter of what's in the frame and what's out," and apply it to his career as a whole, too much is being excluded.

Including the non-crime films in the overall scope of his oeuvre would better serve his ideas and innovations. A film like Casino, often considered to be a sort of sequel to Goodfellas, is actually better contextualized outside of its genre trappings and analyzed as a devastating and personal explorations of human need and manipulation and how we use each other – his Berlin Alexanderplatz if you will. His non-crime films go so unappreciated that they can serve as punchlines: One of the most memorable one-liners in The Sopranos featured Chris shouting to Scorsese, "Kundun! I liked it!" When an exhibition on Scorsese was mounted at the Deutsche Kinemathek in Berlin in 2013 (and recently toured to New York), the one request Scorsese personally made to its curator, Nils Warnecke, was to not focus on the violence and crime in his work. "Everyone" focuses on that, he disappointedly stated.

Scorsese's concerns and interests are far-reaching. Themes of repression, spiritual reckoning, abuse, memory, corruption, class and obsession stretch across his oeuvre irrespective of genre. His interplay with tropes and references dig far deeper than simple homage, interacting with film history to create new meanings. The aforementioned New York, New York articulates the clash of two artists in love with such poignancy partly because of its ingenious mashing of classicism of Hollywood musicals and the realism emerging in 70s American cinema. Kundun contains some of his most intricately designed sequences, and even Life Lessons, his entry in the otherwise forgettable triptych New York Stories (1989), about a painter (Nick Nolte) exploiting an aspiring artist (Rosanna Arquette) contains a montage as quintessential Scorsese as anything else, with Nolte furiously attacking his canvas set to "Like A Rolling Stone"–with no firearms in sight.

It's no secret that Scorsese's career is in its late stages, and in spite of his status, he still struggles fervently to make his most personal films. Although he, in typical fashion, made it into something memorable, The Departed was a "for them" project to try and procure funding for Silence, which ultimately took over 20 years to realize. If our culture really does perceive him as this celebrated master of filmmaking, we would do better to direct our attention to the films that reveal him as an artist who cannot so easily be pinned down. 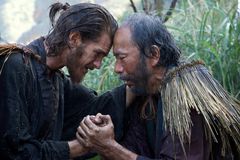 With The Wall, Director Doug Liman channels his fear of failure
May 11, 2017
For its 70th anniversary, Cannes relies on visages familiers
May 11, 2017
Follow us on Twitter @globeandmail Opens in a new window
Report an error Editorial code of conduct
Due to technical reasons, we have temporarily removed commenting from our articles. We hope to have this fixed soon. Thank you for your patience. If you are looking to give feedback on our new site, please send it along to feedback@globeandmail.com. If you want to write a letter to the editor, please forward to letters@globeandmail.com.
Comments