Typically, nobody loves a Goliath-slays-David story. But there are exceptions, none greater than on a summer day back in 1973. There, at the Belmont track in the final leg of the Triple Crown, an equine Goliath named Secretariat achieved something far more magical than merely winning. Instead, before astonished eyes that wouldn't know a furlong from a foot-long, he transformed himself into the winged Pegasus - soaring, charging, pulling away ever faster and further, converting power into raw speed so tangibly, so poetically, that for precious seconds the mythic seemed real.

If you doubt that, proof is just a computer click away. Call up the YouTube video of the race. Even now, viewed in grainy black-and-white from a distance of decades, the magic is there to be seen and, more profoundly, felt. Yes, that old video is bound to turn skeptics into believers. Alas, this new movie isn't - not remotely.

The problem is how to inflate that moment of sheer poetry into a feature-length plot. Horsey movies are usually buddy flicks, partnering the steed with often young and diminutive pals ( The Black Stallion, Phar Lap), whereupon large horse and little rider take on the big bad world. If the buddy isn't little, then the horse must be, as in Seabiscuit. That's because the David factor, the long-odds hero, is always there to stir up the drama.

Ostensibly, so it is here, not in the horse but in his owner, Penny Chenery, a woman in racing's traditionally male domain. Nice try, no sale. The long odds on this gal, the rich daughter of a richer father, seem as contrived as the drama and we aren't buying into either.

The contrivance begins when Penny (Diane Lane) leaves a lavish home in Denver, surrounded by her lawyer husband and a passel of kids, to return to the family stables back in Virginia, where she inherits the reins from her ailing father. Hubby isn't pleased, but our housewife-turned-racing-magnate stays the course. What's more, she defies conventional wisdom by firing the current trainer and hiring Lucien Laurin (John Malkovich), a transplanted Quebecker whose discriminating eye for horseflesh is apparently exceeded only by his pimp's taste in clothes. Sorry, but the comedy here is pretty much confined to the yellow checks on his loud suits.

And you know the dramatic pickings are just as slim when director Randall Wallace tries to find suspense in a coin toss - seems, in the horsey set, that's how they settle the ownership of new foals. Well, ain't her bad luck good. Penny loses the toss but wins Secretariat. Cue the colt-is-born scene, and enter the baby Goliath.

Flash-forward to his first victory with another Canadian (Ron Turcotte) aboard, and then to his horse-of-the-year coronation as a two-year-old. So where's the drama now? It shifts from that tossed coin to bigger money problems: With her stables in financial difficulties, and the whiny hubby still yapping, Penny turns down a cool $8-million for her young horse, choosing instead to sell "breeding shares" in his studly future. Will she raise the requisite bucks? My, but our seat edges are getting quite the workout.

Happily, after a few more plucky outbursts from our budding feminist and high financier ("I'm not giving up"), we're on to the Triple Crown, where the legend is made. That being the well-known case, the niggling question repeats itself: Drama? Try this out. Before the Kentucky Derby, Secretariat comes down with an abscess on his lip. With mere hours until post time, Penny, not just his owner but his BFF, looks him straight in the face, offers a few words of healing encouragement, and - poof - the abscess disappears. It's magic, all right, but just that damned Hollywood brand.

When the trumpet sounds for the races themselves, Wallace uses his camera to manufacture a modicum of excitement, combining extreme close-ups in the starting gate with tracking shots on the course - first, the animals' wild-eyed anticipation, then their thundering stride.

And, among the cast members, you can't fault the five nags who collectively play the title role. They know how to pose, they know how to run, and they look awfully pretty when silhouetted against the rosy dawn or galloping in the morning mist. But none is the real deal. So when the movie climactically reproduces that exhilarating Belmont, the fiction is just a pale shadow of the fact, and the realized myth that lives in our memory dies on the screen.

What Disney thinks a horse can teach us about family values
October 7, 2010 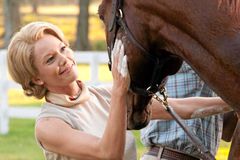