Director Abdellatif Kechiche and his two actresses from Blue is the Warmest Colour, Léa Seydoux and Adèle Exarchopoulos, can agree on at least one thing: The distinctly chilly relations between the filmmaker and his cast are drawing too much attention from the Palme d'Or-winning film they made together. Or made, perhaps, in spite of each other.

Last May, a very unchilly photograph went round the world: At its centre was Tunisian-born French director Kechiche, bespectacled and with close-cropped, grey-flecked hair, shyly smiling at the most coveted award in international filmmaking, the Palme d'Or. On either side of him, the two beautiful young actresses, in matching white dresses, leaned in to bestow a kiss on each of his cheeks. The moment was historic: the first time a film centring on a same-sex relationship had won the award, just days after France had signed same-sex marriage into law.

In an unprecedented decision and vote for sexual equality, the nine-member Cannes jury gave the movie three awards: for Kechiche, Seydoux and Exarchopoulos, recognizing all three as creators of the film. Only three women in history (the other is director Jane Campion) have been awarded the Palme d'Or. "It was an obvious conclusion," explained jury president Steven Spielberg, "that without Léa and Adèle, the synergy could not have happened. If the casting had been even slightly different, if anything had been a little left of centre, it wouldn't have worked."

When the three filmmakers arrived this week at TIFF with Blue is the Warmest Colour, I sat down with each of them to find out a little more about what they felt that night, and on the movie's set. In two separate interviews – one with the actresses, one with the director – I got distinctly different answers.

Exarchopoulos, just 19, said she felt happy and proud for the film, for its statement on gay rights, and proud as well that their collective effort was recognized. Seydoux, 28, whose work encompasses both French and American films (Midnight In Paris, Inglourious Basterds), saw it as a kind of vindication: "Because it was so difficult, I was happy to have it recognized. We worked so hard, and it was extremely intense, and the prize recognized the collaboration."

For director Kechiche, who spoke through an interpreter, the moment was more mixed. First came "joy that my passion was recognized by my peers" but, in the same moment, he says, he knew that "the joy I felt and shared with people I love was short, that satisfication could turn quickly to dissatisfaction and disagreement."

Indeed, there were a few early rumblings. Technicians on the crew filed a report complaining of difficult working conditions and "moral harrassment" from the director. A few critics raised concerns about the objectification of the actresses' bodies; Julie Maroh, the author of the graphic novel on which the movie was based, described the film's prolonged sex scene (in which the women wore prosthetic genitalia) as pornographic and brutal.

Then, this week, the criticism ratcheted up considerably: In an interview published out of the Telluride Film Festival on the online magazine The Daily Beast, Seydoux and Exarchopoulos described the five-month shoot as "horrible" and said they would likely not work with the director again. They said Kechiche ranted at them, forcing them to do take after take because he didn't know what he wanted. The film's sex scene, for example, took 10 days to shoot. In a fight scene, Kechiche insisted that Seydoux hit Exarchopoulos repeatedly for an hour, and he refused to stop the action even when the younger actress cut her hand on broken glass.

When I meet the two actors at their hotel suite, they seem mildly embarrassed about this week's fuss. Exarchopoulos rolls her eyes when I mention The Daily Beast. They aren't retracting their comments, though they do admit to some postinterview remorse. "I regret that it's treated as some big scandal that's so exciting for journalists," says Exarchopoulos. "Yes, the shoot was hard, but it was a human adventure. You can't explain to people – I can't explain to myself – how hard it is to work with your emotions every day; but it's not such a big deal. We're all strong characters – Léa, me, and Abdellatif."

Seydoux says she and Exarchopoulos were not attacking the director but offering "a series of anecdotes" about making the film. "It was all true, but maybe we didn't realize exactly what we were saying. When you see the interview on the page, it looks terrible. I'm not complaining. I chose to be an actress. We're not victims."

She adds that both she and Exarchopoulos challenged Kechiche when they thought he was pushing too much. "I would say, 'Do you realize how hard this is?' And he would answer that this isn't hard, it's not like a worker in a factory."

When Exarchopoulos says she felt the director played on her personal insecurities, Seydoux nods in agreement: "There's a power difference between an 18-year-old girl and a man in his 50s," she says. "And in European films, the director is all-powerful."

One positive thing that did happen on the set, they say, was a bonding, under pressure, between the two actresses. "We were allies, and you can see that on the screen," says Seydoux.

Kechiche is obviously wounded by the criticisms. He looks pensive and troubled when asked about the controversy, and says he finds it "very sad that there has been such negativity, because it is a risk for the film." The controversy about the crew, he says, was part of a campaign to "dirty my image, a big manipulation that was done because it suited some people in [French] film production."

Regarding the actors' charges that he overstepped his bounds, he says flatly, "Of course it's a lie." He blames Seydoux, who "has manipulated Adèle. I think she doesn't know yet this trade of being an actor. And she is not in phase with reality when she speaks about pain. Being an actor is not a trade of pain. … You stay in the best hotels, do interviews, wear jewels. I don't see where the suffering is."

Despite their differences with him, Exarchopoulos and Seydoux find some sympathy for Kechiche. The Palme d'Ors, Seydoux says, confirm that they were the film's co-creators, and she was relieved that the difficult work was not in vain. "I think everyone in the film suffered, not just the actors."

"Him, too," adds Exarchopoulos.

"Him, too," Seydoux agrees.

Beyond the Edge: 3-D doc captures the climb that finally conquered Everest
May 11, 2018 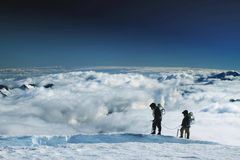