Star Wars and Star Trek have always been light years apart, the former set "a long time ago in a galaxy far, far away," and the latter exploring the future – "the final frontier." Wars imagines a fantasy landscape of rebels, Wookiees and Jedi Knights, while Trek is grounded in a utopian vision of Earth's space program.

But the two franchises have crossed paths in the universe before: Star Wars' success in 1977 encouraged Paramount to resurrect Trek in 1979. Meanwhile, the devotion displayed by Trek fans – their first unofficial "convention" was organized in New York in 1972 – heavily influenced the emergence of a Star Wars subculture.

And now the stars have truly aligned, at least in Hollywood, with science fiction's two most storied screen franchises orbiting one creative mind: director J.J. Abrams. The 46-year-old pop culture savant is slated to unveil the seventh Star Wars' film in 2015, and his follow-up to 2009's Star Trek, titled Star Trek Into Darkness, opened this week across the country.

For two fiercely loyal – and often rival – fan bases, Disney's decision to put Abrams at the helm of the next Star Wars' instalment is a mixed blessing. On one hand, Abrams has been credited with reinvigorating the Trek franchise, and he might work the same magic with Star Wars. But fans are concerned that Abrams will put too much of his own spin on the Star Wars film, given his decision to create an alternative timeline in the Trek reboot, and the two space epics could become less distinctive. Should anyone be allowed to wield a lightsaber and a phaser at the same time? Superfans and experts weigh the pros and cons.

Is he the right director for the job?

Abrams' work on TV shows such as Alias, Fringe and Lost made him a natural to inject new life – and bring a new generation of fans – to Trek. With that successful sci-fi revamp behind him, Abrams was an ideal candidate for Star Wars, says pop culture professor Robert Thompson, founding director of the Bleier Center for Television and Popular Culture at Syracuse University.

Creative overlap between the two cultural juggernauts is probably inevitable, Thompson says, "but rather than fathering these two important franchises, Abrams is more like a foster parent who comes late to each franchise after it has already been shaped, developed and matured." It's not like Abrams is going to take the "two universes and make them exist in some kind of super universe," Thompson adds.

"If it's going to be anybody, it probably should be J.J. Abrams," says Jason Swank, co-host of RebelForce, a weekly podcast and radio show on Chicago's 1530 WCKG AM, which features commentary, interviews and coverage of Star Wars events around the world. "I think Star Trek was a great learning experience. … Frankly, I'd rather have him experiment with Star Trek and get Star Wars right than the other way around."

One key difference that could mean a more traditional approach to the Star Wars sequel, Swank says, is that Abrams is a self-admitted fan of the franchise. For Trek, Abrams charted a new course without any strong emotions clouding his judgment. "That detachment was a strength, in my opinion, for Star Trek," Swank explains. "How is [his fandom] going to serve Star Wars? It's either going to be mind-blowing, or it's going to be a disaster."

Those looking for early hints for how he might approach Episode 7 should take a cue from the Trek reboot, says D. Martin Myatt, a film technician based in Vancouver and content manager at rebelscum.com, a Star Wars' fan site devoted to news about merchandise and collectibles. "It has the same energy and the same pizazz as the original Star Wars films," he says. "If he can take that one simple element to (the new) Star Wars, there is no way he can lose."

How history will shape the future

Created by Gene Rodenberry, Star Trek launched in 1966 and is credited with pushing social and cultural barriers on network television – from portraying the first interracial kiss to showcasing one of the first multicultural casts. Thompson says Star Trek slyly used its futuristic setting to explore then-contemporary social, political and cultural issues, including the civil rights movement and the Vietnam War.

While Trek is steeped in social commentary, psychologist Andrea Letamendi, author of underthemaskonline.com, a pop culture blog on heroes and villains, says Star Wars is "about escapism and fantasy" and rooted in what mythologist Joseph Campbell once called a "hero's journey" – which Lucas has openly credited as an inspiration. Campbell outlined the journey of the archetypal hero: A mundane individual, exposed to the extraordinary, faces a series of trials, wins a decisive victory and returns from his adventure with new powers or self-knowledge.

"Star Wars works, psychologically, more on an individual level," says Letamendi, a frequent fantasy-convention speaker who debated the merits of both works of fiction at a 2013 WonderCon panel. "Does a person have the ability to carve out their own path and negotiate their own fate?"

One criticism levelled at Abrams' 2009 Trek movie was that a series about exploration and the quest for knowledge was turned into a flashy action-adventure. But while Abrams gave Trek mainstream appeal, he paid enough homage to the original characters and Rodenberry's universe to please most fans, says Larry Nemecek, a Trek historian and author of both Star Trek: The Next Generation Companion and the popular blog Trekland.

Following the CGI-driven prequels, Nemecek hopes for a return to the mystical spirit found at the heart of the original Wars trilogy. "If nothing else, maybe J.J. can repair some of the damage Lucas has done," he says.

But Star Wars is also bound to shift under Abrams' approach.

"I think that Abrams is a complex storyteller," Swank says. "I don't think he takes the easy, straightforward path … which I feel (is) very different from George Lucas, who tells a very linear story."

Star Wars was "skeletal and Zen-like in its simplicity," Thompson adds. "The idea of a complex, nuanced Star Wars at this point in time almost seems like an oxymoron. It's like non-alcoholic beer or fat-free bacon – they exist, but they just don't seem right."

While Star Trek fans cherish a new film, they also wonder about the future. Abrams has been non-committal about directing the next Trek, although his company, Bad Robot Productions, will produce it. So his team and vision for the franchise are poised to remain in place. Meanwhile, Star Wars fans wait in rapt anticipation for 2015.

Oddly enough, each franchise's revival may be dependent on borrowing from the other's playbook.

"When Star Wars came out post-Vietnam, post-Watergate, we were in a very bleak period – the villains and heroes were very grey," Swank says. "Star Wars was a breath of fresh air. It was beautifully simplistic and what I think pop culture needed at the time. Does Star Wars in 2015 need more complexity and more of a Star Trek vibe? Maybe it does for today's audience."

Just as Trek needed an injection of dazzle and adrenalin, Star Wars could probably use a shot of nuance and subtext. Will the force be with Abrams? Fans will have to wait two years to find out.

Film Review
Star Trek Into Darkness: Something about this feels familiar
May 15, 2013 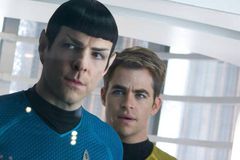