George Takei's fame spans two generations, thanks to his role as Sulu on the original Star Trek and his daily posts for almost eight million followers on social media,which are by turns campy and earnest. But he has also spent much of his life engaged in a very personal form of social activism – most recently as an equal marriage crusader. And in To Be Takei, a new documentary at next week's Hot Docs film festival in Toronto, he lets fans into his life with his endearingly fretful husband (and partner of 25 years) Brad Takei.

Why did you make the documentary?

I have long been a social justice advocate – civil rights, the peace movement, the campaign to get redress for the unconstitutional incarceration of Japanese Americans during the Second World War.

Now, I'm active in the movement for LGBT equality. So when director Jennifer Kroot approached us with the idea for this documentary, Brad and I thought it was a wonderful opportunity to do away with the perceptions that people have about same-sex marriages. We've been together for more than a quarter-century. We have a genuine partnership. This is an opportunity to show the normality of our loving marriage.

It was a very difficult decision for Brad. He is profoundly camera-shy. And in some scenes he might look like that proverbial deer caught in the headlights. But bless his heart, he agreed to do it, even though it was an excruciatingly uncomfortable proposition.

I was reading an article in which Ms. Kroot describes your marriage as a "functional-dysfunctional love story."

[Laughs.] Yes, we are opposites. Brad is almost infuriatingly organized and a neat freak.

We met in a gay running club. He'd run a few marathons and he was the best runner in the club, and stunningly good looking. I thought, I'll get him to train me for my first marathon. He was very successful.

I hope you won't take it the wrong way if I suggest he's the star of the film.

He steals the movie, I think.

I think that was when I was persuaded to be the official announcer for the Howard Stern Show. And certainly, that's accorded me that much more megaphone volume in doing my advocacy work.

You seem to have a rapport with Howard Stern.

He can't tolerate dishonesty. He's got a keen antenna for that.

You've also amassed a huge online following. What's that like?

It's useful. It began when I was developing Allegiance, a musical based on the internment of Japanese Americans – like me – during the Second World War. It's a subject that very few people know about.

My collaborators and I needed to prepare an audience, and I thought social media would be the best way to reach a lot of people. I had no idea it would grow that fast. My base was primarily made up of sci-fi geeks and nerds. I started with trial and error, and I found that humour was what got the most likes and shares. Then, as the audience grew, I thought, why not try a social-justice issue: equality for the LGBT community.

I did that, and it exploded.

Were gay rights on the public's radar when you were first doing Star Trek?

No, it was not even talked about. Everything was very secretive. The gay bars of that time were usually down very seedy-looking alleys. Even in gay bars, people had to have their guards up, because periodically police would raid them, march the clients out, load them onto paddy wagons, take them to the police station, photograph them, and fingerprint them and put their names on a list. They had leverage over you then. If they let that list out, your career was in jeopardy, and maybe even your membership in your family.

For me to be pursuing a career as an actor was the most dangerous, foolhardy, risky thing to be doing.

I was passionate about acting, and I took that chance. And people in the business are sensitive people. Certainly most of my colleagues from Star Trek guessed that I was gay. Only one person had no idea of my sexuality. It went right over his head.

Are we going to name names?

Who appears in the documentary, no less.

I had to bargain with him to get him to do the interview.

So much gets made out of this running animosity with William Shatner.

Does it really exist, or is there an element of performance here?

There is an element of that now, but Bill was not the easiest person to work with. If you know who he is, he's supremely self-obsessed. There's a thing called actor's etiquette. That did not apply to him.

I didn't realize that you had been so politically active. You worked on governors' races and presidential campaigns, starting with Adlai Stevenson.

All my campaigns failed, except when I got behind Tom Bradley for mayor of Los Angeles, and when he won, he appointed me to the Southern California Rapid Transit District board (I had been an architecture and city-planning student at Berkeley). The mandate was to get started on building a subway system.

In Canada, when I fly over Toronto, I can always peg where your subway stations are, because that's where you have your high-rise areas. You organize your city in a way that's much more efficient and salubrious.

Do you see yourself as a culture warrior?

No, I just see myself as an advocate of justice and equality for all people. 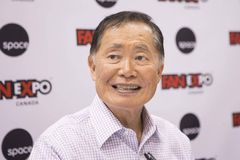 updated
Actor George Takei among tens of thousands calling for Sochi Games to be moved to Vancouver
August 7, 2013 Shatner lashes out at Star Trek co-star Takei
October 24, 2008
Follow us on Twitter @globearts Opens in a new window
Report an error Editorial code of conduct
Due to technical reasons, we have temporarily removed commenting from our articles. We hope to have this fixed soon. Thank you for your patience. If you are looking to give feedback on our new site, please send it along to feedback@globeandmail.com. If you want to write a letter to the editor, please forward to letters@globeandmail.com.
Comments