When the bored L.A. punk played by Emilio Estevez gets offered a job in Alex Cox's 1984 cult nugget Repo Man (just released on Blu-ray by Criterion), he not only acquires a sense of purpose but a gig with mileage. As filmed by the then 29-year-old British director, L.A. is a depopulated urban dumpster of a place where nobody works but everybody drives. As a field of opportunity for the newly minted "repo man" named (ahem) Otto, this vast paved wasteland of unpaid-for cars is ripe for harvest.

Meanwhile, a decade earlier and on another coast, a twitchy Vietnam vet named Travis Bickle gets a job driving a big yellow checker cab in Martin Scorsese's Taxi Driver (screening Sunday night at Royal Cinema following an introduction by screenwriter Paul Schrader). But while the time and place may be starkly different, the role of the car as a delivery system for twisted redemption is consistent with the tale of Otto. When Travis (an alarmingly convincing Robert De Niro) gets behind the wheel, he's another dysfunctional social outcast who's found a home behind a dirty windshield, and from there he floats through the streets of a sleaze-soaked New York and plots his revenge. He's an avenging urban angel with wheels for wings.

Both Repo Man and Taxi Driver qualify as cult attractions on the basis of having limited but loyal repeat-viewer followings and subversively skewed visions. But you might also add car trouble to the mix, for a conspicuously large number of certified cult movies run on the spectacle of people in automotive circumstances. Let's just consider a few: Gun Crazy, Rebel Without a Cause, Bonnie and Clyde, Bullitt, The French Connection, Vanishing Point, Two-Lane Blacktop, Badlands, Duel, The Road Warrior, Thelma and Louise, and David Cronenberg's Crash. And in the past couple of years alone, such likely future cult fodder as Drive, Cosmopolis and Holy Motors. With striking consistency, the cult movie and the road movie converge.

That the car is roughly the same age as movies likely has something to do with it: It's an affinity of historical coincidence. But the car was always something more than merely a transporting machine: In the early days of movies, it permitted cameras to move, got crews to locations, and provided an endless source of sensational amusement in slapstick car chases. When sound came along, the screech of tires and crunch of metal was a fixture of gangster and crime movies, and essential to the process of getting away. It was the outlaw's new, chrome-shiny horse.

The car's cult status might have reached its apex from the late fifties to the seventies, when millions of people not only drove their cars to watch movies at drive-ins, but watched movies about cars through their windshields. By the time Burt Reynolds came along in the seventies, it was not only possible for a movie star's career to be made by driving, but to sell movies on the prospect of burned rubber alone: The Car, The Driver, Corvette Summer, Greased Lightning, the original Gone in Sixty Seconds. The new cowboy stopped only for gas.

The car also offered endlessly photogenic and irresistibly cost-efficient visual excitement: Whether it was speeding through the frame or observing landscape fly by through its windows, the car put the moving in the pictures. It was an instant signifier of action, speed and escape, three concepts as endemic to the movie experience as darkness and desire.

Which takes us back to the list above. How many of those movies are about cars as vehicles of transgression, as the means by which laws are broken, craziness is spread, violence spread? For the purposes of cult credibility, this prospect of the car is crucial, for it's what has always lent the car the promise of something so much more than just another ubiquitous machine.

Like the gun but in an even more ambiguous way, there's a perpetual hint of danger in the car, the opportunity to cross the line from order to chaos with a mere pump of the gas pedal or twist of the steering wheel. Cars are kept on this side of the law by an entire set of rules and regulations, but those laws are only as effective insofar as the driver obeys them, because it's the driver who's really got the power. The question is, how will he use that power? Will he stay on his side of the road or cross over?

To a large extent, the cult movie appeals because it trades in visions of chaos. Behind the wheel, chaos is never more than a white line away.

Drive: A dark, stylish reinvention of the car chase
September 16, 2011 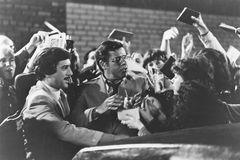 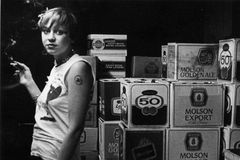