It was pretty hard to miss Jason Eisener on the set of his first feature film. His typical uniform included a red plaid jacket and a trucker's cap with the words "More Blood, More Heart" inscribed above the brim. It's his mantra, really. For years he's dreamed of filling the gutters of Dartmouth, N.S., with blood. And now his dream has come true.

The 27-year-old director wore the getup while completing Hobo With a Shotgun, the story of a man with no fixed address meting out justice in a corrupt and violent city. Starring Rutger Hauer, it's a throwback to the violent, low-budget exploitation thrillers of the 1970s - dubbed grindhouse films - an almost forgotten sub-genre until a special project, called Grindhouse, by Robert Rodriguez and Quentin Tarantino's hit theatres in 2007.

Although Hobo is his first full-length effort, Eisener isn't a directing neophyte. He's made short films since he was 15 with buddies Rob Cotterill and John Davies, who are joining in as producer and writer on Hobo, respectively. Their earlier efforts include last year's 15-minute horror comedy Treevenge - a satiric story of Christmas trees taking vengeance on seasonal celebrants.

That earned the crew an honourable mention at Sundance. But making feature films is what Eisener and his friends have always aspired to. Enter Hobo, a small film that earned them big backing - including nods from directing superstars and an eventual budget of $3-million.

It all started when Eisener was working at his day job at a Dartmouth comic store and decided to enter the International Grindhouse Trailer Competition at the SXSW festival in Texas. The contest was hosted by Robert Rodriguez and Quentin Tarantino as part of their special Grindhouse project. It packaged together films by Rodriguez ( Planet Terror), Tarantino ( Death Proof) and a series of short, faux "trailers" for grindhouse movies by other directors - including one to be selected in competition.

On a budget of $150, Eisener and Cotterill created their entry: two minutes of grainy, gritty, gory action they called Hobo.

It beat out 300 other filmmakers, earning them a trip down to Austin to meet Rodriguez and Tarantino and the opportunity to have their short attached to prints of the Grindhouse feature across Canada. ( Machete, a fake trailer Rodriguez also threw into the mix for Grindhouse, is now being made into a feature as well, starring Danny Trejo, Robert De Niro and Jessica Alba.)

Hobo also caught the attention of Rhombus Media's Niv Fichman, producer of literary Canadian features such as Blindness and Passchendaele. Through his support (and that of Frank Siracusa of Whizbang Films, a producing partner of Paul Gross), Eisener and his team got real funding to make a real movie for their, well, fake trailer.

For his lead, Eisener decided to approach Rutger Hauer. Partly because he was a fan of his films, such as Flesh & Blood, The Hitcher and Blood of Heroes. But also because of Hauer's Film Factory, an annual master class for new filmmakers led by Hauer in Rotterdam, which posts their clips online.

"I saw how great he was with young directors," says Eisener. "This is going to be my first-time film, I don't want it to be traumatizing. I want to work with someone who has patience who just wants to come and have some fun."

And fun is what Rutger Hauer is having. On set last month in rainy Halifax, wearing an old jacket, hoodie and toque, the bulky 66-year-old looked the part of a vengeful, well-armed transient. Though the lines in his face are deep, his blue eyes sparkle just as they did when he played replicant Roy Batty in Ridley Scott's Blade Runner 28 years ago.

"I do tend to spend one-third of my work time with talent that is new, risky or interesting because I feel I should, it's a different challenge," he says in slightly accented English.

He praises Eisener and his friends for their passion and knowing what they want. "These people are so full of fire and so am I. It's inspiring. You can live on that for a long time. I inspire them by being here and they inspire me by what they're doing."

Eisener says when he was learning about the mechanics of filmmaking, what impressed him about Hauer's acting was the way he was able to inspire emotion through his face without a lot of accompanying exposition.

"This character, 'The Hobo,' that's what he's all about. He doesn't talk that much, it's all about what's going on inside his head and seeing it come through his eyes."

For Hauer, the challenge is to make the role as iconic and gritty as possible. "There's one real voice in there, almost the unspoken voice," he says. "I feel like Clint Eastwood and John Wayne in there. It's almost like a salute to them. I have to come up with lines so you can hear the echo."

As for the experience of making their first big feature?

Eisener and his Team Hobo were certainly working on a scale that was exponentially bigger than anything they'd done before. But the film still has a distinctively local flavour. It features a wardrobe from iconic Halifax skate shop Pro Skates. And a classic New Brunswick-built sports car - the Bricklin SV-1 - makes an appearance.

"We're still shooting a guerrilla film. We're just givin' 'er, every day," says Eisener. "We're making a film with all our friends, but for some reason we've got Rutger Hauer playing here with us." 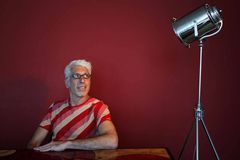