Penelope Spheeris's classic 1981 documentary The Decline Of Western Civilization, which has just been released along with the rest of the trilogy in a deluxe box set by Shout! Factory, isn't a movie audiences just watch and listen to.

No, Spheeris's exploration of some of the leading lights of the late 1970s/early 1980s Los Angeles punk scene is a movie so pungent and filled with sweaty intensity that you can practically smell the rank body odour of the film's subjects as they hurl their bodies against each other in a frenzy of aggression or perform as if in a trance, soaked with perspiration.

The release of the box set is very good news for punk fans and pop culture obsessives, as the cost and complexity of figuring out the licensing rights for the music in the films has kept them off DVD. Thankfully, the licensing specialists at Shout! Factory have worked out the music rights and brought these films back into circulation in the best, most complete possible way.

The film's style is as brutal, stripped-down and purposefully devoid of frills as the music of its subjects, such as X, Circle Jerks, the Germs and Fear, who dominate the end of the film with a riveting final performance where lead singer Lee Ving taunts and provokes the crowd like the product of an unholy union between Sid Vicious and Andrew Dice Clay.

Ving is half punk-rock performance artist and half insult comedian. The rage, sometimes righteous, sometimes nihilistic, that powers the film and the movement it so deftly and sensitively chronicles finds its purest expression in Fear transforming their ostensible fans into enemies and nakedly daring them to lash out against them physically as well as verbally.

The documentary combines the sober and insightful recollections of giants such as Ozzy Osbourne, Alice Cooper, Gene Simmons and Paul Stanley of KISS, and Steven Tyler and Joe Perry of Aerosmith with the asinine idiocy of a group of glam-metal pretenders all utterly convinced they're destined to be twice as big as the Beatles and whom all more or less vanished without a trace.

The elders of Part II are the voice of wisdom and experience, but the up-and-comers are afflicted with the infernal arrogance of youth. In the film's most queasily fascinating moment, W.A.S.P. bassist Chris Holmes wallows in alternating currents of self-loathing and self-aggrandizements as he swills vodka straight from the bottle and floats in his pool while his mother looks on.

The Decline Of Western Civilization Part II is also such a visceral experience you can practically smell it, but where the first film is redolent of sweat and furious exertion, the giddily, guiltily, gloriously entertaining second instalment reeks of perfume, sex, cigarettes and whisky.

Simmons is an unlikely inspiration for a punk documentary, but in Part II, he tells Spheeris that the artists are only half the story and the other half is the audience and the fans.

Sure enough, 1998's The Decline Of Western Civilization Part III focuses less on bands than on fans, particularly gutter punks for whom punk isn't just a musical genre but a philosophy and a lifestyle.

Where Spheeris's attitude toward her subjects in Part II is one of morbid curiosity, Part III oozes empathy and compassion for her broke and alienated subjects, but the ragged kids Spheeris follows in the film are nowhere near as compelling as artists such as Darby Crash, Exene Cervenka or John Doe from the first film, and their complaints about society and the man feel suspiciously like the anti-authoritarian rhetoric of every subculture, ever.

The Decline Of Western Civilization series ends with its weakest instalment, but it's still a monumental achievement in filmmaking and pop-culture sociology. The films are important and essential time capsules irrevocably rooted in the times and scenes they chronicle, yet blessed with a fundamental timeliness. Even decades later, these films have the power to connect with audiences like a fist to the gut. Film Review
Congestion of culture jamming takes bite out of The Yes Men Are Revolting
July 10, 2015 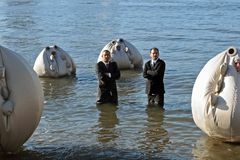 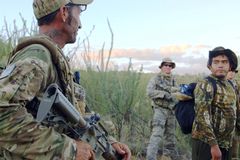