"There's an unhappy paradox about literary biographies," writes David Foster Wallace, reviewing Edwin Williamson's Borges: A Life. For Wallace, readers of such stuff often fell victim to "the intentional fallacy," conflating the personality and peculiarities of the writing with those of the writer. "It often seems," he writes, "that the person we encounter in the literary biography could not possibly have written the works we admire. And the more intimate and thorough the bio, the stronger this feeling usually is."

This disjoint between the impression offered by a given writer's writing and the actual personality of the writer was something to which Wallace was particularly attuned. His anxiety regarding this very disjoint forms the centre of The End of the Tour, the very well-meaning but nonetheless abominable new Wallace movie, based on writer David Lipsky's account of his five-day jaunt with the author on the last leg of a tour promoting the novel Infinite Jest in 1996.

"I got a real serious fear of being a certain way," says Wallace, played by Jason Segel in the movie. Wallace's greatest gift was his mindfulness. As both journalist and novelist, he was dazzlingly aware of the world he lived in; a world of media and late-night talk shows and gaudy high-sea pleasure cruises and what he called the "tsunami of stuff" that constitutes the wash of contemporary life. Problem was: This frighteningly acute, devastatingly intense gaze was often turned inward. He worried that his vaunted status as an inheritor to the postmodern legacies of Thomas Pynchon and Don DeLillo would corrupt him, not just creatively, but spiritually. "You guys made your bones in a different time," Wallace wrote in a letter to DeLillo, in the midst of the Infinite Jest hype, "when the author's own personal person wasn't as necessary a part of the PR machine that itself wasn't necessary to sell books."

Wallace found himself looped in his own unhappy paradox. Not only was he afraid of becoming "a certain way." But he worried that the already very-certain way he was would itself be perceived as a set of media-savvy affectations. When Segel-as-Wallace describes singer Alanis Morissette as "pretty in a very sloppy, very human way" in The End of the Tour, the movie is nudging us to think that a desire to appear chaotically human dictated Wallace's sartorial choices, if not the whole engineering of his public persona.

In this way, the movie commits its own mawkish version of the intentional fallacy. "This?!" The End of the Tour asks knowingly, "This is the guy who wrote the seminal American novel of the past quarter-century? This guy who guzzles down M&Ms and uses a Barney the Dinosaur beach towel for a curtain?!" But of course this is the guy. This ruffled, Everyman-ish air is why so many people liked Wallace. And it's the awareness of this charm that Wallace found so totally exasperating. His long hair, his trademark bandanas, his untied work boots and lip stuffed with lumps of Skoal – there was always a fear that his quality of just-a-guy-ness would seem like a preening put-on.

Post-Infinite Jest, Wallace responded to the ever-ballooning Idea Of Himself in two ways. First, he wrote himself into his stories. In his unfinished final novel, The Pale King, Wallace interjects nearly 70 pages in with an oddly placed "Author's Foreword," intending to clarify that what the reader has so far perceived as an episodic experimental novel about employees slugging away at an Illinois IRS branch is in fact more like a memoir. He assures the reader that he is "the real author, the living human holding the pencil, not some abstract narrative persona." He pops in and out of the story, before receding into the background. It was as if the only way to resolve the nagging presence of the author from the work itself was to remove him from the equation entirely.

I remember where I was when David Foster Wallace disappeared. Sitting on a busted chair, rolling lopsided on the waxy parquet floor of my first Toronto apartment. The phone rang, and it was my ex, and she asked me if I had heard what happened to Wallace. I hadn't. And she told me that he had hanged himself. And I was devastated in a way that's tricky to describe. But here goes: It was like when you stomp on one of those discarded tallboy beer cans at an outdoor concert, then kick the crushed piece of hollow, purposeless aluminum along some bleak, smoke-butt-studded slice of grass. Except the scrunched tallboy was all the things I had inside of me and the foot was not my own. It was Sept. 12, 2008, and I was a 22-year-old kid.

I cried a bit, but not too much, and immediately deleted the in-progress novel I was working on. It was mostly people talking about stuff, like their dads and their crueler urges and their failed marriages, and it was an embarrassingly Wallace-ian affair. It, too, has now disappeared. If Wallace couldn't find in writing the necessary artillery to fight back against the suffocating, ever-entreating mess of life itself, what hope was there for the rest of us mugs?

Shortly thereafter I had tattooed on my right bicep an image from Wallace's first novel, 1987's The Broom of the System. It's an aerial map of a suburb resembling the actress Jayne Mansfield's head. I liked, and still like, this image. It seems to suggest that if you get high enough above those grand symbolic structures (a suburb, a network of relationships, a grand ideological scheme, whatever) you'll be able to understand things that seem bafflingly complex at ground level. And also: Those workings may be entirely arbitrary, even absurd. To my mind, Wallace was A-1 at understanding the intricacies and convolutions of such systems, whether a private tennis academy, an IRS office, a Hollywood film set, the ethics of seafood eating or the nature of literature and creativity itself.

The sad irony is that now, in death, Wallace is adrift in such a system. The End of the Tour, and the culture and conversation around it – including, I guess, this thing you're reading right here – have flattened him into part of the same grinding machinery of media/fame/celebrity/hypocrisy that he often wrote about.

The vogue of late is to note that Wallace and his writing have become their own pop-cultural affectations. An untouched copy of Infinite Jest adorning the bookshelf of a certain kind of person equals wannabe literary savvy. As New York magazine's Molly Fischer asked earlier this month, "How did poor David Foster Wallace go from dissecting the pretensions and shortcomings of mid-century men of letters to holding a central place in the pretensions of their heirs?" Or as the Guardian's Jeb Lund tweeted this past weekend, "I wish David Foster Wallace was alive and all his fans were dead."

Terms like "literary chauvinists" and "lit-bros" have been deployed to describe these Wallace diehards. This sort of attitude gives me, to yoink a favourite phrase from Infinite Jest, a serious case of the "howling fantods" – a severe pang of physical revulsion, the big-time heebie-jeebies. Using an author, and maybe especially a dead author, as a bludgeon against a certain kind of (non-)reader feels as bad as using that same author as a merit badge.

As Fischer notes, there may well be a certain macho pride in being a Wallace fan. There may be a sense of robust accomplishment in being able to finish a 1,000-plus-page novel, and then bicep curling it 900 times. The problem with such arguments is they're their own kind of mutated intentional fallacies: mistaking the fanboys for the author and the author for the work. They seem to intentionally neglect the dense pleasure, humour and rarefied insight of reading – like, actually reading – David Foster Wallace.

Of all the many systems and networks and knotty webs of intricate meaning Wallace almost intuitively understood, the thing he really got was the fundamental ambivalence of life in the spoiled West. He knew that to be alive and aware and at all self-conscious meant that there was always a tug o' war yanking our insides one way or the other, a push/pull "between your deep need to believe and your deep belief that the need to believe is bullshit." And for many of us, Wallace satisfied that need. He was able to, as he once described fiction's function at its most vital, "make heads throb heartlike." His writing managed to reconcile, or at least briefly dispel, that ambivalence. He was something to believe in.

As for the strawman lit-bros using Infinite Jest as a keystone in their barely dog-eared collection of chauvinist novels? Maybe this new, wholly misguided, Wallace movie will push them past the self-important swagger. Maybe they'll end up cracking Infinite Jest's formidable spine some day. When they do, they'll realize that it's in the writing – and not the bandanas and mock-provocative think pieces and saccharine biopics and polished Ideas of the Author – that the rest of us mugs find hope. If poseurish hypocrisy facilitates such modest lightning bolts of insight, if macho literary chauvinism gets the head to pound at the pace of a racing heart, then, well, I suspect that's just another one of modern life's many unhappy paradoxes.

Film Review
The End of the Tour: Self-serving film more about Lipsky than Foster Wallace
August 28, 2015 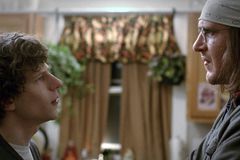 In the woods with actors and a 600-pound black bear to film Backcountry
August 27, 2015 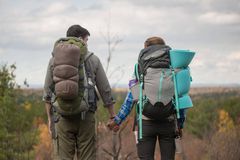 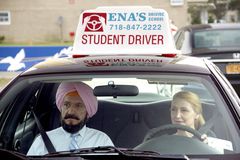 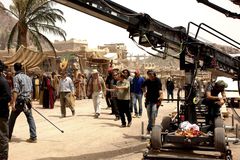