Quentin Tarantino collects actors like he does allusions to the work of Japanese director Toshiya Fujita – which is to say, often and with considerable glee. Like contemporaries Paul Thomas Anderson and Wes Anderson, Tarantino has built up a rep company of sorts, populating each of his films with the same collaborators, carrying them over from film to film. The director's latest, the gore-drenched western riff The Hateful Eight, is no exception: Of the eight performers taking on the despicable title characters, only two are first-time Tarantino collaborators. A breakdown of the actors who prefer to keep it on the QT:

Ever since Tarantino cast Jackson as the philosophical hit man Jules in Pulp Fiction – which earned the actor an Oscar nomination for best supporting actor – the director has rarely made a film that didn't involve the Kangol-sporting star. Whether it's a meaty role such as Jackie Brown's gun-dealing villain Ordell Robbie or a quick cameo such as Kill Bill Vol. 2's Rufus (he was the organ player who popped up in the wedding flashback before being killed), Jackson excels in adding an extra-slick layer of cool to anything Tarantino touches. Even Tarantino's beloved Uma Thurman hasn't worked with the director as much – and perhaps to reward Jackson's creative camaraderie, Tarantino has given him the juiciest role of his career in The Hateful Eight. As the Poirot-like bounty hunter Marquis Warren, the actor gets to deliver epic monologues while dishing out brutal, visceral vengeance.

Tarantino's feature debut Reservoir Dogs didn't have to work too hard to earn its notoriety – from the mid-film shootout to the bloody climax, the tale of dishonour among thieves was a blast of violence and high-brow exploitation at a time when indie films were supposed to be focused on the pains of modern sexuality and the earnestness of adulthood. But the film's most extreme moment undoubtedly involved Madsen's Mr. Blonde, who tortures a police officer to the tune of Stealers Wheel's Stuck in the Middle with You. (Although if you watch the scene now, it's as tame as an episode of Dora the Explorer compared with the likes of basic-cable TV's American Horror Story or Sons of Anarchy.) It was a breakthrough role for Madsen, which the actor unfortunately never managed to parlay into something bigger – for the most part, he's been relegated to direct-to-video thrillers and even the pseudo-films of gangster aficionado Frank D'Angelo. Yet, Tarantino has proved to be a loyal friend and creative partner to Madsen, bringing out the best of the actor's inherent malevolence in Kill Bill Vol. 1 and 2, and now The Hateful Eight, in which the actor plays the cowboy-of-few-words Joe Gage.

Tim Roth (three and a quarter)

For the early part of Tarantino's career, Roth seemed to go wherever Tarantino did, from his starring role as the undercover cop in Reservoir Dogs to the greasy-spoon robber Pumpkin in Pulp Fiction. He also gets an extra quarter-point for starring in Tarantino's contribution to the anthology film Four Rooms, which is now more of an oddity than anything else. But after Four Rooms, the pair's work began to taper off, although Roth was supposed to play the role that eventually went to Eli Roth in Inglorious Basterds (perhaps the film's only flaw). Now, though, the actor is back with Tarantino in The Hateful Eight, playing British hangman Oswaldo Mobray – though his goatee, effete mannerisms and delightfully ridiculous name can't dispel a sneaking suspicion that Roth's only there because Christoph Waltz was too busy.

After a long and fruitful relationship with John Carpenter – another filmmaker who loved riffing on underappreciated genre films – Russell has formed a strong late-career bond with Tarantino. First joining the director on Death Proof – Tarantino's half of the ill-fated, if undoubtedly genius, Grindhouse project with Robert Rodriguez – Russell has quickly proven to be one of the filmmaker's strongest players. And it's not as if Russell is a rescue project of sorts for Tarantino, like Pulp Fiction's John Travolta or Jackie Brown's Robert Forster. The actor is still a well-regarded star and his action-hero past lends a sense of serious heft to his performances in both Death Proof and The Hateful Eight (even if the latter is essentially a movie-long John Wayne impersonation). He also earns that asterisk thanks to his participation in Django Unchained, which was half-filmed but aborted due to scheduling issues.

For those who have been watching television's The Shield or Justified, Walton Goggins is a known quantity. Slick, smart and wily, the character actor is a director's dream. He's a wild, captivating presence, whether playing a villain or a hero who wrestles with his villainous side more often than not. Thanks to Russell's scheduling issues on Django, Goggins saw his minor role in that film expanded (he was one of Jamie Foxx's many tormentors), and now faces his big-screen break with The Hateful Eight, where he plays a sheriff-to-be who may also be America's biggest racist. Let's hope this is the beginning of a beautiful Tarantino friendship.

After experiencing a comeback of sorts with 2013's black-and-white comedy Nebraska, Dern was briefly back on Hollywood's radar. Although the 79-year-old hasn't worked much since Alexander Payne's film, he did find himself caught up in Tarantino's circle of influence, with a brief but memorable role as a slave owner in Django Unchained. Like Goggins, Dern continues his Tarantino-sponsored streak of portraying god-awful racists in The Hateful Eight, playing a one-time Confederate general with several chips on his shoulder.

Bichir, who earned a best actor Oscar nomination for his work in 2011's A Better Life, is a rookie to Tarantino's world in The Hateful Eight. And as the mysterious Mexican farmhand Bob, he ably carries himself among the more seasoned vets. But Bichir is not without a tangential Tarantino connection: He co-starred in 2013's Machete Kills, directed by Tarantino BFF Robert Rodriguez.

Playing The Hateful Eight's murderous Daisy Domergue, Leigh is just as new to Tarantino's world as Bichir. But as the film proves, she's more than game to handle every one of the director's gruesome, torturous whims. 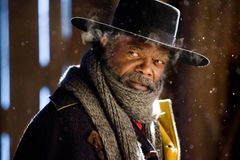 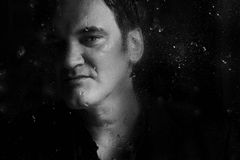