Before the funny movie came the somewhat more serious book, whose white author dared to write in a black voice. Let's start with the book.

A segregated society, especially one with a slave history like the American South, is both tragically unjust and terribly complicated. Complicated, because master-slave relationships demand inequality even as they promote interdependence, leaving both sides to sift through a welter of emotions – fear, hatred, anger and guilt obviously, but loyalty too, even love. Intelligent Southerners, black and white, have always been sensitive to those complexities. Intelligent Southerners who happen to be gifted writers, black and white, have woven them into the fabric of their work. To do so with full honesty, they must use their own voice and appropriate others. The question is not whether voice appropriation is morally right – without it, neither William Faulkner nor Alice Walker could have written what they did – but whether it's socially and aesthetically truthful.

Kathryn Stockett is a white Mississippian with a bestselling novel to her credit. Now, few would put The Help on the proud shelf of great Southern literature; on its evidence, Stockett is hardly a gifted writer. But her intentions are good: To revisit Mississippi in the early sixties, using the relationship between black maids, the white children they raise and the women who employ them as a matrix for examining segregation's complex emotions. Yes, she appropriates black voices, not credibly but clumsily and sentimentally, although always in the service of her liberal-minded theme. The book reads like Civil Rights Lite.

Now comes the inevitable movie, which, in the hands of writer/director Tate Taylor, does a novel about injustice an injustice itself: It turns lite into featherweight. The tag line to the movie poster claims, "Change begins with a whisper," but the advertising proves false. Seems that change begins with a laugh and pretty much stays there. Yet credit Taylor with novelty. Typically, this sort of film is an earnest tear-jerker with moments of levity. Instead, what we have here is a raucous rib-tickler with occasional pauses for a little dramatic relief. Fans of the book may not remember it as a comedy, but the box office will likely crack a wide smile.

Aibileen (Viola Davis) and Minny (Octavia Spencer) are the maids in question. Wise and dignified, the former has raised "white babies" all her working life, the latest a cute toddler whose own mother is as detached as she is ineffectual. Larger and fiery, Minny toils for the villain of the piece – Miss Hilly (Bryce Dallas Howard), an acculturated racist blind to her own bigotry. Enter Skeeter (Emma Stone), a white woman back from college who, unlike her girlfriends, lacks a husband but is filled with liberal sentiments and writerly aspirations. To that end, she invites the maids to transgress the Jim Crow laws and "tell their stories" to her, which, after some initial reluctance, they do.

Since those stories aren't "voiced" in the film (as they are in the novel), the premise pretty much doubles as the whole plot. In the absence of narrative, cue the comedy, which arrives thick and fast and from the most unlikely sources. Hilly's mother, who suffers from dementia, is a constant fount of laughs. So is Skeeter's mom, who suffers from cancer, but my, how she's determined to find that gal of hers a good man. The villainous Hilly herself is more the object of our laughter – like when a crap-load of commodes are piled on her front lawn, or, in the same scatological spirit, when Minny gets her revenge by baking the bigot a chocolate pie with a very personal additive.

Over in the mansion of the buxom Celia (Jessica Chastain), the white-trash blonde who married up but retained her heart of gold, the romp continues – she attends the charity ball, imbibes too much, pukes on the hoity-toities. Curiously, in the midst of the mania, it's Stone, hitherto a comic actor, who's left with the unenviable task of essentially playing the straight woman. She does look a bit miscast.

But not Davis, whose monologues – for example, recounting the death of Aibileen's son – give the script a depth it otherwise lacks, Yet her contributions also seem oddly out of place, as if she just stepped in from the set of Mississippi Burning. Meanwhile, the real struggle for change, the one that began not with a whisper but with shouts and shootings and the deaths of martyrs like Medgar Evers – is politely confined to a glimpse or two at the edges of the frame.

So the fun continues through to the climax, when something even weirder happens. This is one of the very few movies I've seen where the sad ending feels gratuitously tacked on and completely unearned. Yet say this for The Help. At a running time well over two hours, the film realistically captures the eternal fight for civil rights in one crucial regard: It too seems without end.

Bestseller novel The Help needs help with its history homework
August 6, 2011
Pssst, the secret of The Help's success is word of mouth
September 2, 2011 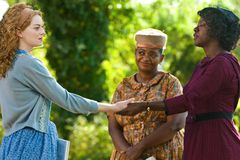