In the summer of 1965, Paul Saltzman, a Canadian university student, drove from Ontario to Mississippi to register black voters with the Student Nonviolent Coordinating Committee. One afternoon in Greenwood, Miss., a group of loiterers harassed him by the courthouse steps. One of them, Byron (Delay) De La Beckwith, threw a punch that knocked Saltzman off his feet. Luckily, he landed in a racer's starting-block position, from which he took off running, fast enough that his pursuers eventually gave up.

Delay's father, also called Byron, a leader in the local Ku Klux Klan, had recently stood trial – twice – for assassinating the civil-rights leader Medgar Evers, who was shot in the back on June 12, 1963. (Though his first two trials ended in hung juries, he was convicted in 1994 and died in 2001.) And three other SNCC "Freedom Fighters" – James Chaney, Andrew Goodman and Michael Schwerner – had been murdered in June, 1964.

Saltzman finished his stint, returned to Canada and became an award-winning film and TV producer (including Map of the Human Heart, about an Inuit in the Royal Canadian Air Force in the Second World War). "Early in my filmmaking, I realized that I can put out junk food, or health food," he says. "To me, it was always important to put out health food." On a work trip to India in 1968, he found himself studying meditation at the same ashram in Rishikesh as the Beatles. He was married to the director Deepa Mehta from 1973 until 1991, and later founded the non-profit organization Moving Beyond Prejudice. And he didn't go back to Mississippi for four decades.

So naturally, he felt some trepidation when, in 2007, he and De La Beckwith met up again at those same courthouse steps. But this time the encounter was planned: Saltzman was shooting a documentary about Mississippi then and now, and Delay had agreed to be in it. "I always wondered what happened to you," he'd said when Saltzman first contacted him.

"Look at the tension in my face and body when I see him," Saltzman, now 69, said over coffee at the recent Toronto International Film Festival, where his resulting documentary, The Last White Knight, had its world premiere. (Financed in large part from Saltzman's own savings, it's playing Saturday and Monday at the Vancouver Film Festival, and will eventually air on Rogers Super Channel.) "I still have some fear. And look at the way, when we shake hands, his other hand holds me near my elbow – so I can't hit him. It's a subtle moment, but a powerful one."

More such moments follow: Morgan Freeman explains why he feels more at home in rural Mississippi than anywhere else. Harry Belafonte describes the night he and Sidney Poitier were chased by the KKK. Medgar Evers's brother Charles speaks candidly about the Freedom Fighters' impact. Three current Klan members are interviewed in full robes and hoods. But it's Saltzman's dialogue with De La Beckwith that provides the spine of the film. As they chat, cordially and with growing trust, Saltzman's calm curiosity nudges De La Beckwith toward some startling re-evaluations. By the film's end, a relationship that began in violence leads to the most subtle but powerful moment of all: We watch a mind changing.

"Delay opens up more and more and more, I believe, simply because I wasn't judging him," says Saltzman, whose speaking style is surpassingly gentle and careful, onscreen and off. "Some people have told me that they felt I wasn't hard enough on him. But I grew up reading and admiring Gandhi and Mandela. If they had been talking to Delay, they would have done it better, but do you think they would have been harder on him? You don't get anywhere by being right, and judging. He and I can argue about 900 things, but the question is, can we do it without judgment and aggression?"

The issues of the civil-rights era still resonate, of course. Saltzman's last film, Prom Night in Mississippi, took viewers to the first racially mixed prom in the history of Charleston, Miss. – in 2008. And his current film is premiering in the midst of one of the most divisive presidential elections in American history, in no small part because the incumbent, Barack Obama, is black.

"The Southern Poverty Law Center, who did our study guide for Prom Night in Mississippi, were tracking 1,000 hate groups in America before Obama's election," Saltzman says. "They're up to 2,000 hate groups now. So 1,000 have come out of the woodwork." But he insists that's "a positive thing, in that it brought prejudice out of the shadows, so one can see it and deal with it."

Whenever he screens Prom Night in Mississippi (as he did at the White House last December) or The Last White Knight (he's submitted it to the Sundance Film Festival) for school, community and corporate groups as part of his work with Moving Beyond Prejudice, "the session is the same every single time," Saltzman says. "People share the same human stories of having run into prejudice. You hear the same hurt, the same shame. So if you allow people to share their feelings, without judgment, what happens is, people applaud spontaneously the person who shares. So it's like a healing, even though it's an entertainment."

That also means that Saltzman treats the KKK members in his film with the same respect he treats everyone else. "When I walk in the room, that's a human being there," he says. "I don't want to be hurt by them, and I don't want to hurt them. And within three minutes of starting to talk to them, I had that same curiosity [about] what do you believe, and what were you taught? I'm there to learn, and to transmit that moment to the viewer. It's not only not my temperament, it's not my job to judge them. Judgment freezes reality. The minute I judge you, we're stuck; that's the end." He's much more interested in new beginnings.

Morgan Freeman talks about his Prom Night in Mississippi
November 13, 2009 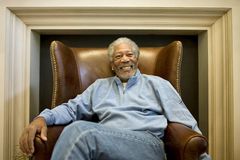 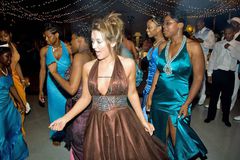