'People always ask me that," says R.L. Stine, throwing up his hands in mock aggravation. "People always want to know if there's a formula. I wish! I wish there was a formula. That would be very helpful."

So there. There is no formula to the 72-year-old Stine's Goosebumps books – the series of superpopular children's novellas that hit bookstores, elementary school libraries and Scholastic Book Fairs in 1992. Bespectacled, balding, dressed in all black, Stine looks like a weird uncle, the sort of goofy, good-natured family member who would try to make a quarter appear from behind your ear but mess it up somehow, which is pretty much precisely how you want him to look. You could spot R.L. Stine (or "Bob," as he likes to be called) on the street and, without knowing, plausibly think, "That guy looks like bestselling children's horror writer R.L. Stine."

Between the main series and spinoff imprints (such as the choose-your-own-adventure-style Give Yourself Goosebumps line), there are nearly 200 Goosebumps books, which have sold nearly 400 million copies combined. It's a number that a fictionalized version of Stine (played by actor Jack Black) boasts about in the new Goosebumps movie, and one that would seem to suggest some hard-and-fast recipe for success.

If there's not a formula, per se, then there are things most Goosebumps books share. There's usually a relatable, every-kid protagonist ("They're not special kids," says Stine.). This every-kid is usually thrust into an unfamiliar environment (a new town, a vacation getaway, a haunted summer camp) where things are never as they seem. For the most part, parents and teachers and other adults in ostensible positions of authority are facile and ineffectual, leaving the kids to solve their spooky predicaments on their own. "The parents are useless!" Stine laughs. "They're never any help, ever."

There's also a commingling of humour and horror. Spookiness and silliness go hand-in-hand in Goosebumps, something which the new movie intuitively understands. (The casting of full-bellow Black as a maniacal version of Stine is particularly inspired.) "There's a very fine line between humour and horror," says Stine, who wrote joke books before turning to children's horror novellas. "They both affect you in such a visceral way. Like if you go up to a baby and say, 'Boo!' the kid gasps, then laughs. It's very close. In Goosebumps, every chapter ends with a shock, or a cliffhanger. For me, that's like writing punchlines."

But there's one part of the Goosebumps non-formula that most distinguishes the series. There's always – always – a twist. It's typically one that relies on a basic ironic reversal of fortunes. My favourite: In Goosebumps #21, Go Eat Worms!, a kid who becomes interested in collecting butterfly specimens awakens in the book's final chapter to find a giant butterfly pinning him to a board, exacting its revenge. These sorts of cumulative ironic turns double as climactic punchlines, lacking only a winking, nudging ba-dum-dum-ching rim shot.

Still, it feels like a fair appraisal. As an early, avid Goosebumps fan, with shoeboxes upon shoeboxes stuffed with the dog-eared titles, I can attest that Stine's spooky-funny novels planted the germ for a long-nurtured interest in horror fiction. The books introduced a generation of readers such as myself to both the genre's basic tropes (the haunted house, the creepy basement, the creaking floorboard) and a roster of stock characters (ghosts, graveyard ghouls, vampires, mummies, werewolves, witch doctors, wisecracking ventriloquist dummies).

Stine leaves the interpretive work up to the critics, or the childhood fans desperately trying to wring meaning out of the books they poured countless precious, preadolescent hours into, and who still hold a soft spot for Stine's silly stories.

Something of Goosebumps' cheekiness lingers. Their mix of humour and horror, contempt for authority, and po-mo mash-ups of horror-fiction forms and clichés were totally, thoroughly, irreverent. The Goosebumps books offered trickle-down apathy for junior Gen Xers. They were early lessons that nothing should be taken too seriously. They also taught young readers how to read them, schooling them in that not-quite-formula, training them to expect the twist.

Speaking to Stine, I'm a bit taken aback when he tells me he's still writing Goosebumps books, and that the movie isn't just some calculated nostalgia trip for old-timers like me. "I'm still doing it!" he protests. "The newest one is called Night of the Puppet People. It just came out. "

It's not that R.L. Stine went anywhere. It's that I aged out of the target demographic. It's comforting, in its own way, knowing that Stine is still around pumping out his Goosebumps stories; knowing that whether through the new books or the movie, kids will be spooked and amused and mindlessly entertained, and most importantly, exposed to that most central lesson of all horror fiction, and of life itself: Things are not what they seem. 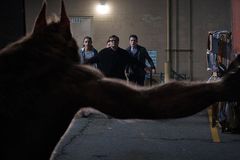 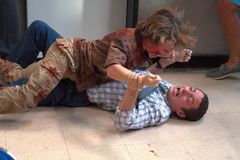 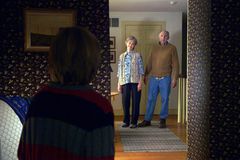 Film Review
Nothing in Sinister 2 is believably scary
August 21, 2015 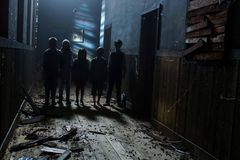