Steven Spielberg's Jurassic Park, which was released in theatres 22 years ago this week, offered a spectacle no one who has ever been nine years old could resist: A chance to see dinosaurs and humans walking the Earth together. Based on Michael Crichton's novel about a future theme park where dinosaurs are reconstructed from DNA, the 1993 film was a roaring, stomping success, eventually earning more than $1-billion (U.S.) at the box office and spinning off three sequels. The latest of these, Jurassic World, opens Friday.

Reviews at the time were mixed (68 out of 100 on the aggregate Metacritic website), but critics were generally wowed by the dinos. One of the less positive critiques came from The Globe and Mail's film critic at the time, Jay Scott. Today, the review has a prophetic quality, coloured by the knowledge that it was one of the last reviews Scott wrote before his death at age 43, just two months later.

Scott begins his review through an imaginary historical perspective: "Some day, historians will look back on all this with amazement: How, they will ask, could so many have become so excited over so little?" By the review's conclusion, the historians have turned into scientists who "will pick through the fossilized remains of Hollywood" and find Jurassic Park.

"They will screen it. They will use it to reconstruct life eons ago, when directors and producers roamed, if not ruled, the Earth. Citing the film as evidence, the scientists will release their conclusion: Movies died out because they got too big for their pea-sized brains. … The scientists will have a name for the extinct species: Cinesaurus."

Like all prophets, Scott expressed general wisdom rather than a series of specific predictions. In the past two decades, the movies haven't become extinct but something has shifted profoundly. By featuring human beings interacting with convincing-looking simulated creatures, Jurassic Park became a new kind of animal: The computer-generated, photograph-based, moving-image simulation.

Before Jurassic Park, computer-generated imagery had been regarded with some skepticism: Notable flops, such as Francis Ford Coppola's One from the Heart (1981) and Disney's Tron (1982), had put a chill on the technology for the better part of a decade. James Cameron's Terminator 2: Judgment Day (1991) had reawakened interest and popularized the acronym CGI. Jurassic Park, with its seamlessly integrated use of animatronic robots and CGI, made the developmental leap.

Two years after Jurassic Park, Pixar brought us Toy Story, the first feature-length computer-animated film, done in a striking photo-realistic way, bringing the world of cartoons and filmed drama closer together. By the end of the millennium, while Susan Sontag was proclaiming the death of cinema, or at least cinema culture, the new hybrid was mutating into video games and DVD and the Web. In 1999, The Matrix showed human beings performing impossible acrobatics in a world where all of reality is a simulation. The Phantom Menace (1999) introduced the first CGI humanoid character, Jar-Jar Binks. Gladiator (2000) revived the sword-and-sandal epic using a computer-generated cast of thousands, and even simulated the actor Oliver Reed, who died during production.

These were soon followed by Peter Jackson's The Lord of the Rings trilogy, eight Harry Potter movies, James Cameron's Avatar, and the long line of comic-book movies that have defined the new millennium.

Evolution isn't linear. In the past two decades, there's been a reaction to this explosion of simulation in a fetish for the authentic: A boom in documentary, of low-fi dramas, viscerally intense horror, reality television, fake found-footage and Borat-style pranking that co-exist with the pea-brained monsters. The Cinesaurus stalks us still – and it has a tremendously long tail. 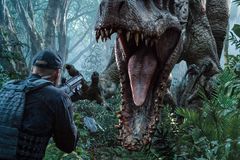