Charles Schulz hated Peanuts. He loved his characters, of course, and poured his soul into his comic strip – but that word itself, Peanuts, was odious. It was a title his syndicate bosses imposed on the comic strip in 1950 against his better judgment, a term that trivialized his life's work. He would try to shake off the stigma of Peanuts for the rest of his long career.

In the Sunday paper, Schulz made sure the strips bore his preferred title, Good Ol' Charlie Brown. There is no trace of Peanuts in the names of beloved television specials such as A Charlie Brown Christmas and It's the Great Pumpkin, Charlie Brown. When the first animated film starring Schulz's characters appeared in 1969, he called it A Boy Named Charlie Brown. Peanuts connoted "little insignificant things," Schulz maintained; it was "the worst title ever thought of for a comic strip."

Now, 15 years after Schulz's passing – and 50 years after Charlie Brown's first TV special – The Peanuts Movie arrives in theatres. Co-written by Schulz's son and grandson, the movie is in many ways respectful of the cartoonist's legacy. His line drawings are lovingly, if briefly, replicated onscreen. Snoopy is free-spirited and puckishly funny throughout. The beagle's gargled voice, Vince Guaraldi's songs and a handful of jokes are all preserved intact from earlier versions ("I can't talk to that little red-haired girl," Charlie Brown mopes, quoting the strip verbatim, "because she's something and I'm nothing").

Still, even before its over-extended kiss-kiss-bang-bang climax, I found myself scrutinizing how far The Peanuts Movie strayed from the comics and cartoons to which Schulz signed his name while alive. That Peanuts moniker is merely the first indication something's amiss: after a half-century of disuse, "the worst title ever thought of" once again afflicts Schulz's characters. The rest of the film deviates even more from the original strips and specials.

Most obviously, the two-dimensional world of Charlie Brown and Snoopy is rendered in hyper-real and creepy 3D. Every surface is sculpted and textured to the point that the park where the Peanuts gang frolics might as well be called Uncanny Valley. In the comics and cartoons, Snoopy could lie on the roof of his doghouse because it was little more than an abstract red rectangle, but as the camera swoops around in 3D, we see him perched right on the ridge – ouch! Charlie Brown's weird proportions used to make sense when the frame always showed his full figure, but this movie's close-ups make his hands seem monstrous and swollen, his tiny black eyes beady and soulless. And did we really need to see every last follicle of Frieda's naturally curly hair? (She gets off easy: Linus's tangled mop looks like something fished out of a drain.)

I would levy a more serious charge against the film's spirit. Schulz's silliness is here in abundance, thanks to the mugging of Snoopy and Woodstock, but The Peanuts Movie stints on the real neuroses and grief that Schulz somehow sneaked onto the funny pages and prime-time TV. Charlie Brown's once-crushing humiliations are now sweetened with rewards. His book report may get destroyed, but not before Linus declares it a work of true insight; his kites may get mangled at first, but eventually he gets one victoriously aloft. He sputters and pratfalls in front of the little red-haired girl, but before long she validates his entire existence by praising his courage (?) and picking him for a pen-pal (!).

Moments such as these, and the treacle that oozes out of the film's final half-hour, made me realize I was wrong to hold up the movie to previous Peanuts incarnations. Like a grim Batman fan watching a Joel Schumacher sequel, I fretted that The Peanuts Movie wasn't being "true" to the characters, or didn't "get" the essence of the Schulzian Weltanschauung.

I was, of course, misguided. When Linus says, "It must feel pretty good being Charlie Brown right now," or when Sally coos, "I'm proud to be your little sister," they do belong to a Peanuts lineage, albeit one removed from Schulz's strips and specials. Instead, these are the sentiments of Peanuts gift books and greeting cards, of happiness and warm puppies and the whole Peanuts licensing empire.

Where earlier animation adapted Schulz's characters to the screen, The Peanuts Movie just adapts his merchandising. The characters resemble plastic toys onscreen, where they're blown up to the size of Macy's parade blimps. Sally at one point even sets up a stand hawking Charlie Brown-themed trinkets. In a sense, the film is faithful to Schulz's vision, in its commercial aspect if not its artistic one.

The animated version of the Peanuts gang debuted as part of a marketing scheme, after all, brought to life in TV spots advertising Ford automobiles in the late 1950s. During Schulz's lifetime, his characters sold products: Kodak cameras, Coca-Cola, MetLife insurance. Now, untethered from any new comic strips, the characters themselves are the products being sold. Peanuts the brand inspires The Peanuts Movie far more than do Schulz's comics. And that's just fine – Peanuts, for Schulz, never referred to his comic strip anyway. 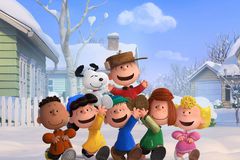 Why author Lee Henderson wishes he were Linus from Peanuts
December 19, 2014 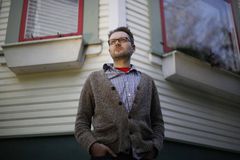 Stoner versus spy satire American Ultra has comic books at its core
August 21, 2015