In a poem that could have been composed one lonely night this week, Pablo Neruda once wrote:

"In the middle of the night I ask myself / what will happen to Chile? / What will become of my poor, dark country… / I feel that now / with the dead year of doubt scarcely over, / now that the mistakes which bled us all / are over and we begin to plan again / a better and juster life, / the menace once again appears / and on the walls a rising rancor."

If the kind of darkness Neruda wrote about can be found in the ups and downs of today's political landscape, it is his words – and the space for reflection and beauty they provided – that remain absent. But as though he knew we would need them, Chilean director Pablo Larrain has brought those verses back with his new film Neruda, providing a glimpse into a time when politics and poetry intertwined.

Neruda takes a page out of the poet's life in 1948, when a warrant was out for the arrest of the infamous Communist Senator who had established himself as a voice for the Latin American political left – elitist, perhaps, but respected.

While the man led a life full of intrigue, Neruda doesn't take the traditional biopic route. Yes, it follows Neruda, played by Luis Gnecco, as he stays one step ahead of the police officer charged with his capture, played by Gael Garcia Bernal.

Far from anything predictable, by combining a script full of literary techniques and Larrain's staple dark humour; Garcia Bernal's rhythmic narration; dream-like use of light and colour; and one final, breathtaking stanza set in Chile's snowy, mountainous south, the overall effect of the film is something, well, poetic.

"There is this perception that it is a poem," Garcia Bernal says in an interview when Neruda played the Toronto International Film Festival last September. "Pablo, together with [writer] Guillermo Calderon, intertwined everything so that all of a sudden, without knowing, the audience is like, 'Shit, I'm inside a poem… It's not a linear one; it's like a building that also has a metaphysical reflection happening at the same time. So there are two places being built, or three or four or five. There are many universes being built at the same time."

The full effect of the film's "many universes" becomes clearer in the last act, when the line between fact and fiction nearly disappears. "Each time I see the movie – I have seen it five, six, seven times – I get emotional again," Gnecco says, recalling the film's ending. "Everything is in peace. As a spectator, I can say, well, I am impressed."

The film, which received a Golden Globe nomination this week for best foreign-language film, has been touted as a biopic (much like Larrain's other newly released film, Jackie), but Larrain says he'd rather not label it – nor the poet himself.

"How do you bring that guy into a movie? It's not possible. So when you assume that, it gives you a huge amount of relief because then it's fiction and then you're working with the tools of cinema. And that's freedom," Larrain says. "I remember submitting the movie to Cannes and you have to fill a form and go: Colour; running time; sound specs; all the details; and then – genre."

"I called the festival and I said, 'Guys, we are not going put this movie in a box because you can't put Neruda into a box.' Because this movie is a political thriller. It's a black comedy. It's a chase movie. It's a noir reflection, a portrait. And it's a game. And fiction."

The film may be Larrain's most obvious love letter to cinema, to art and, by celebrating one of the country's biggest icons, to Chile – despite its contradictions, just the way Neruda lovingly worried over his "poor, dark country," so many years ago.

Film Review
Neruda is a near-perfect homage to a literary giant
May 17, 2018 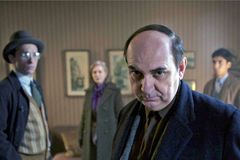 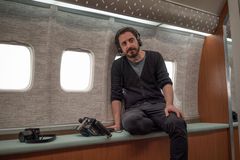