It was New Year's Eve, 2015. I was sitting next to a good friend and fellow filmmaker, Nico Pereda. It was about an hour before midnight, and we were putting lentils in our pockets.

According to Colombian new year superstition, filling your pockets with lentils on Dec. 31 ensures prosperity in the year to come. I was at a low point, and figured I could use all the help the lentils might offer. I had just made a film, How Heavy This Hammer, and I didn't know how to answer when Nico asked me what I had planned for the movie. I told him that we were waiting to hear back from the Berlinale film festival. Then, Nico asked me: Don't you think that you would have heard from them by now? I was embarrassed. He was right. My long-time producing partner, Dan Montgomery, and I had recently worked with Nico on his film Tales of Two Who Dreamt in Toronto, and I knew that he had already received an invitation to screen it in Berlin more than a month ago in November.

How Heavy This Hammer premiered at the Toronto International Film Festival earlier that fall and was well received. What we wanted next was to continue that momentum and screen at a big A-list festival outside Canada, the Berlinale. For us to do that, we had to save our international premiere for them. This meant waiting without any guarantee of actually being invited to screen and turning down several other great international festivals that fall.

At that moment, teetering on the edge of 2016, I felt like I had blown it. I had no idea what was in store for my film. That could have been it. My film could have just faded away forever, before it really existed for people outside the bubble of film festivals.

A week later, my film was invited to screen in the Berlinale Forum, and a month later, I was on a plane to Germany. Perhaps the lentils did the trick.

We had five amazing screenings in Berlin, and suddenly, this film that had nearly disappeared from public consciousness had been seen by a few thousand German cinephiles. Following that, the film travelled the world, screening in Australia, Denmark and Mexico. We also screened across Canada, with a week-long run in Toronto that resulted in a nomination from the Toronto Film Critics Association. It was a surreal experience for me. I didn't win, but the nomination itself was a huge honour.

The night of the TFCA awards gala, the poster for my film somehow got prime placement on stage and was the only poster framed on the television monitors. Margaret Atwood, Atom Egoyan and Denis Villeneuve all took turns making speeches with Erwin van Cotthem, the star of my film, peering over their shoulders. Perhaps the most surreal moment was when I was introduced to Sarah Polley for the first time and she told me that she had seen my film three times. I was confused. I wasn't used to having my work acknowledged and lauded by strangers, let alone strangers such as Sarah Polley. A lot had happened since New Year's Eve, 2015.

Working as a filmmaker, you get used to being ignored very quickly. You train yourself to expect rejection, not to take it personally. Just the other night, I ran into some undergrad film students from York University who had just pitched scripts that were all rejected. I tried to give them advice, to console them. I empathized, because I remembered how that felt.

It takes a long time to get over the habit of asking yourself: Am I a filmmaker? Every initial rejection feels like the world is telling you that you can't do this, and that you don't have it in you. To be honest, that feeling of self doubt/being a fraud never goes away. When crossing the border, whether for vacation or to attend a film festival, I still struggle to tell people that my occupation is a filmmaker. Each filmmaker has to come up with their own system of beliefs or logic to take up this crazy endeavour.

My film opens in New York this week and will be released on-demand for iTunes Feb. 21, which is perhaps the final step toward it truly existing beyond my own bubble. Not only will anyone, anywhere, be able see it at the push of a button, but a week-long run in New York also serves as a bottom-line qualifier for a lot of film critics. Finally, the movie that I made in 2015 can now be considered for 2017 "Best of the Year" lists by both film critics, and by anyone with an interest and access to the Internet.

How Heavy This Hammer will screen as part of the MDFF film series Feb. 18 at The Royal theatre in Toronto.

How to decode the Canadian filmmaking formula
January 30, 2017 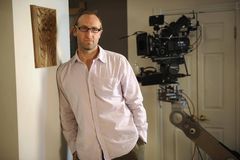 Dear Canadian filmmakers: it’s not about you, it’s about us
January 27, 2017
Should we have a ‘Canadian values’ test for films and TV shows?
February 10, 2017
Follow us on Twitter @globeandmail Opens in a new window
Report an error
Due to technical reasons, we have temporarily removed commenting from our articles. We hope to have this fixed soon. Thank you for your patience. If you are looking to give feedback on our new site, please send it along to feedback@globeandmail.com. If you want to write a letter to the editor, please forward to letters@globeandmail.com.
Comments