Less is more. Or at least that's the current maxim of the Toronto International Film Festival. As revealed Thursday morning, the 2017 edition of TIFF is set to show 20 per cent fewer films, cancel two of its 16 programs, and drop the remaining two of its uptown venues.

At first glance, anyone who calls him or herself a film fan should be mortified – how could anyone cheer a reduction in programming? What is TIFF if not a smorgasbord of cinema? Is this going to make it even more impossible to get into the buzzy films that, if missed, will taunt me for the rest of my waking days? Why hast thou forsaken me, Piers Handling???

But take a deep breath and a step back, just past those broken Scotiabank escalators that so plagued the festival last fall, and the situation is not nearly so dire.

As a now-notorious Variety column pointed out toward the end of TIFF's 2016 edition, the festival's sheer size was threatening to topple the organization. Last year, TIFF screened 296 full-length features – an impossible number of films to navigate, even if you were to watch from dawn till dusk during the fest's entire 10 days. As TIFF brands itself as both a community event (the erstwhile "People's Festival") and a marketplace (where buyers and sellers can conduct business and Oscar prognosticators can handicap the all-important fall-season awards bait), it was all simply a case of excess.

Whether it was the Variety story that sparked this year's rethink or the constant grumbling heard in the press lounge, the hotel lobbies, the Lightbox bathrooms and the darkened corners of the Soho House, the downsizing is hardly unexpected.

What is surprising, and heartening, is that TIFF is actually listening, at least to certain corners. The festival has always carried a slight air of arrogance, as evidenced by its insatiable lust for star vehicles with little artistic merit and its bizarre feud with the Telluride and Venice film festivals, which TIFF mostly backed away from in 2015. This year, it could have simply grown even larger, just to spite the naysayers, and we all would have shook our heads, sighed deeply, and muttered the familiar refrain of, "Oh, TIFF." To hear artistic director Cameron Bailey admit that some "fine-tuning" was in order, well, that's a humble, gracious side of TIFF that the public has rarely glimpsed.

But at the same time, there is more work to be done.

First, if the festival wanted to make its programming more manageable, why did it have to kill the Vanguard and City to City programs? It remains to be seen just where the 20-per-cent cut of selections will come from exactly, but here is hoping that it mostly affects the glut of how'd-that-get-here? features crowding its Special Presentations sidebar, or its wobbly Primetime experiment focused on television. True, only a few might miss the relatively young City to City (except those clamouring for easy controversy, as was provided when the inaugural program focused on Tel Aviv in 2009). And yes, Vanguard selections could get lost in the shuffle, especially when its selections seemed just as easy a fit for Midnight Madness.

But those programs offered something unique, something legitimately curated. Last year's Vanguard program, for instance, offered one of the best surprises of the festival, the delightfully bonkers Anne Hathaway sci-fi drama Colossal. Special Presentations, meanwhile, is traditionally a home for substandard Hollywood product that carries the distinct whiff of studio horse-trading – take this stinker, and you'll get a shiny Gala offering in return, we promise.

The challenges facing the festival also go beyond just how many films it shows. Will TIFF curtail its fondness for front-loading its first few days of programming with the buzziest movies, leading to a manic media and industry free-for-all that only disserves the films? Will it loosen its absurd rules around its "Fan Zone" pen, which restricts the activity of public stargazers? Will it rid itself of "demand-based" pricing, in which the cost of a regular festival ticket (already an imposing $25) increases when a screening is near capacity? Will it commission new Grolsch People's Choice Award commercials for the first time in what seems like a decade? Will it do everything in its power to ensure those damn Scotiabank escalators are working?

Possibly. It just might take a Variety scolding, or three. Until then, we'll be patient – and queue up in the rush line, as always. 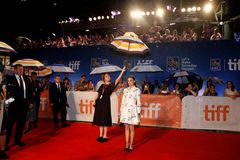 TIFF praises little-known Canadian movies with Top Ten Film Festival
December 7, 2016
TIFF acquires nearly 1,500 film prints for preservation
November 15, 2016
Follow Barry Hertz on Twitter @hertzbarry
Report an error Editorial code of conduct
Due to technical reasons, we have temporarily removed commenting from our articles. We hope to have this fixed soon. Thank you for your patience. If you are looking to give feedback on our new site, please send it along to feedback@globeandmail.com. If you want to write a letter to the editor, please forward to letters@globeandmail.com.
Comments