Early in the winter of 1836, as HMS Beagle sailed through the Pacific in the final year of its journey, Charles Darwin became particularly interested in Australia – in its flora, its fauna, its biological diversity; captivated by evolutionary oddities like the ant-lion, the kangaroo rat and the duck-billed platypus, by the vaporous "thin blue haze" emitted by eucalyptus trees. In his diary, Darwin wrote, "An unbeliever in everything beyond his own reason might exclaim, 'Surely two distinct Creators must have been at work.'"

Darwin's theory of natural selection would reject this idea of two Creators. Or even a single Creator, "the one hand that worked throughout the universe." Species advance, grow, evolve without the help of a prime mover nudging them along. The beauty and biological diversity Darwin observed can, with poor planning, curdle into ugliness, dreariness, extinction. We adapt, or die trying.

In writer-director George Miller's Mad Max movies, the picturesque, dazzlingly complex Australia of Darwin's diaries has been blasted out, replaced by arid wastelands, deserts and simple networks of roads and highways. The Australia – the whole self-contained narrative world – of Mad Max is cartoonishly postapocalyptic, peopled by hooligans in leather and feathers motoring across the sandy, sun-bleached wilderness in souped-up roadsters and weaponized dune buggies.

It's also a godless world, from which any capital-c Creator has totally withdrawn, whether out of lack of interest or embarrassment. It's a "maelstrom of decay," as the narrator of 1981's Mad Max 2: The Road Warrior puts it. "Only those mobile enough to scavenge, brutal enough to pillage, would survive." It's survival of the fittest, the fastest, the most maniacal. It's a world of oil shortages, water wars, psychotic survivalism. It's a Darwinian nightmare that seems perfectly suited to our time.

So, as easy as it is to despair over the cold algebra of the remake/sequelize/franchise model that has dictated slates of multiplex offerings for the past 30 years, the promise of a new Mad Max movie coming three decades after the franchise's last instalment feels oddly buoying. With his original trilogy (1979's Mad Max, 1981's Road Warrior and 1985's Mad Max Beyond Thunderdome), George Miller made a movie star of Mel Gibson, and influenced everything from the goofy aesthetic of eighties glam rock to a wave of wasteland-chic dystopian sci-fi movies (Waterworld, a sort-of Road Warrior on the ocean, comes to mind). Miller also minted a vision of the postapocalypse that seems more pertinent in our present historical moment.

As Naomi Klein notes in her book This Changes Everything, the word "apocalypse" comes from the Greek apokalypsis – something uncovered or revealed. The nature of a given apocalypse or large-scale catastrophe, imagined or otherwise, reveals plenty about the civilization that precipitated it. (Unless the cause is a huge meteor smashing into Earth. Then again, are our politicians really doing enough to defend us against the threat of asteroids, meteors, comets and other potentially calamitous orbital menaces?)

The blown-out desert ruins of the Mad Max movies are, after all, the result of centralized energy dependency, on a world powered by (to quote that ominous Road Warrior narration again) "the black fuel." In the first film, the world was crumbling. By The Road Warrior, oil was a too-precious commodity, pursued by rival gangs of whooping motorists. Epitomizing the race-to-the-bottom, zero-sum hoarding of non-renewable resources, people burn oil while speeding to get more oil, only so they can burn it again, etc. In Beyond Thunderdome, oil has been all but replaced by methane, harvested from hog feces.

More than another warmed-over nostalgia piece (though, of course, it is that, too), the new Mad Max: Fury Road, starring Tom Hardy as the titular cop-turned-wasteland-messiah, feels like the perfect postapocalyptic movie for our own age of energy crises, peak oil and howling obliviousness to the probable imminence of our own civilization's demise. In this new one, Max agrees to help Furiosa (Charlize Theron) across the expansive desert, and they're pursued by her former captor, Immortan Joe (Hugh Keays-Byrne). (Miller's knack for goofily descriptive character names is practically Pynchonian: Master Blaster, Rictus Erectus, Aunty Entity, Big Rebecca, Dr. Dealgood, the Toecutter, the Humungus, the People Eater etc.)

Fury Road's early promotional trailers immediately won over Mad Max fans, at once evoking and deliriously ramping-up the manic, comic-book action of the original trilogy. Caravans race across highways, trucks skid and fishtail to avoid hellacious explosions, while colossal sandstorms swell on the horizon. Unlike other jacked-up franchise fare, the singular vision of "mastermind George Miller" (as he's billed in the trailer) seems excitingly back at work in Fury Road, from the severity of the landscape to the goon playing a flame-throwing electric guitar perched on the front of a rolling transport.

It's these more ludicrous touches – the flamethrower guitar, the chucked tridents, the howling and hooting – that best define Miller's distinct creation. Mad Max reveals not just the plausible cause of looming apocalypse, but our attitude toward it. It's not just that we burn through oil and war over natural resources. It's that we don't care. Mad Max tempts to relish in the apocalypse, to whoop maniacally at this godless, blasted-out future.

We delight in the spectacle of our destruction. We're drawn like the greasy yahoos to the perimeter of Thunderdome, that mano-a-mano death-match fighting cage from Miller's third Mad Max movie. Drunk on the spectacle of gritty violence and winner-take-all survivalism, we're suckered in by the siren song of the carnival barker beckoning us toward annihilation, hollering, "Ladies and gentlemen, boys and girls: Dying time's here." 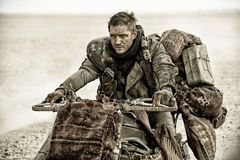