Without a doubt the MVP at the multiplex this holiday season is Colleen Atwood, a triple-threat behind the big Christmas day double-bill. The three-time Academy Award-winning costume designer created the fantastical costumes for both Rob Marshall’s much-anticipated adaptation of Stephen Sondheim and James Lapine’s hit musical Into the Woods and the period wardrobe for Big Eyes, Tim Burton’s biopic of painter Margaret Keane.

For Into the Woods, a mash-up of fairy tales that converge in the forest, each tale conveys its own aesthetic, based on a specific epoch. For example, the Baker and his Wife (James Corden and Emily Blunt) have a Victorian feel, whereas Cinderella is from courtly and romantic fantasy. “The world they were in, to me, felt like those eras,” the American costume designer says down the line from London, England, where she has just wrapped up work on Burton’s Alice in Wonderland sequel.

To make those initial connections, Atwood took her cues not from visual references but from Stephen Sondheim’s music. “Being able to take this piece of amazing music and writing and be part of it is a huge thrill,” she says. Atwood lived in New York in the late 1980s during the musical’s original Broadway run but did not see it at the time. “Shamefully, no – that’s both a liberation and a curse,” Atwood says with a rueful chuckle. “When I listened to the music of each one I put it in its environment of where in my mind it originated from. The sad mother with the sad cow and the sad boy, that’s very Dickensian to me,” she says. “And it felt like Johnny’s number [Depp plays the Wolf] was a little more swing vibe.” The Wolf’s exaggerated zoot-suit silhouette could be borrowed from Cab Calloway’s closet – it was inspired, thanks to Depp’s own input, by animator Tex Avery’s dandy, suit-wearing 1940s cartoon wolf.

The effect is especially lush because Atwood heavily manipulates her chosen fabrics – or in many cases, creates them entirely from scratch. On the moppet Jack (Daniel Huttlestone), trousers are a moleskin base with linen sewn on with cording. “That’s three to four layers of material sewn together with a stripe – and then cut away so it isn’t all one dimension.” After the Witch (Meryl Streep) goes through a youthful transformation, she wears a bright teal, a much more glamorous couture version of her earlier dark, gnarled and stooped costume. The dress is more elaborate sculpture than fabric. “It’s ribbons sewn on organdy along with the leather cording that was incorporated in the earlier costume,” Atwood explains. “The material was all handmade and then manipulated into the sleeves, with some boning to give it the structure. It’s basically an amplified version of the first costume.” 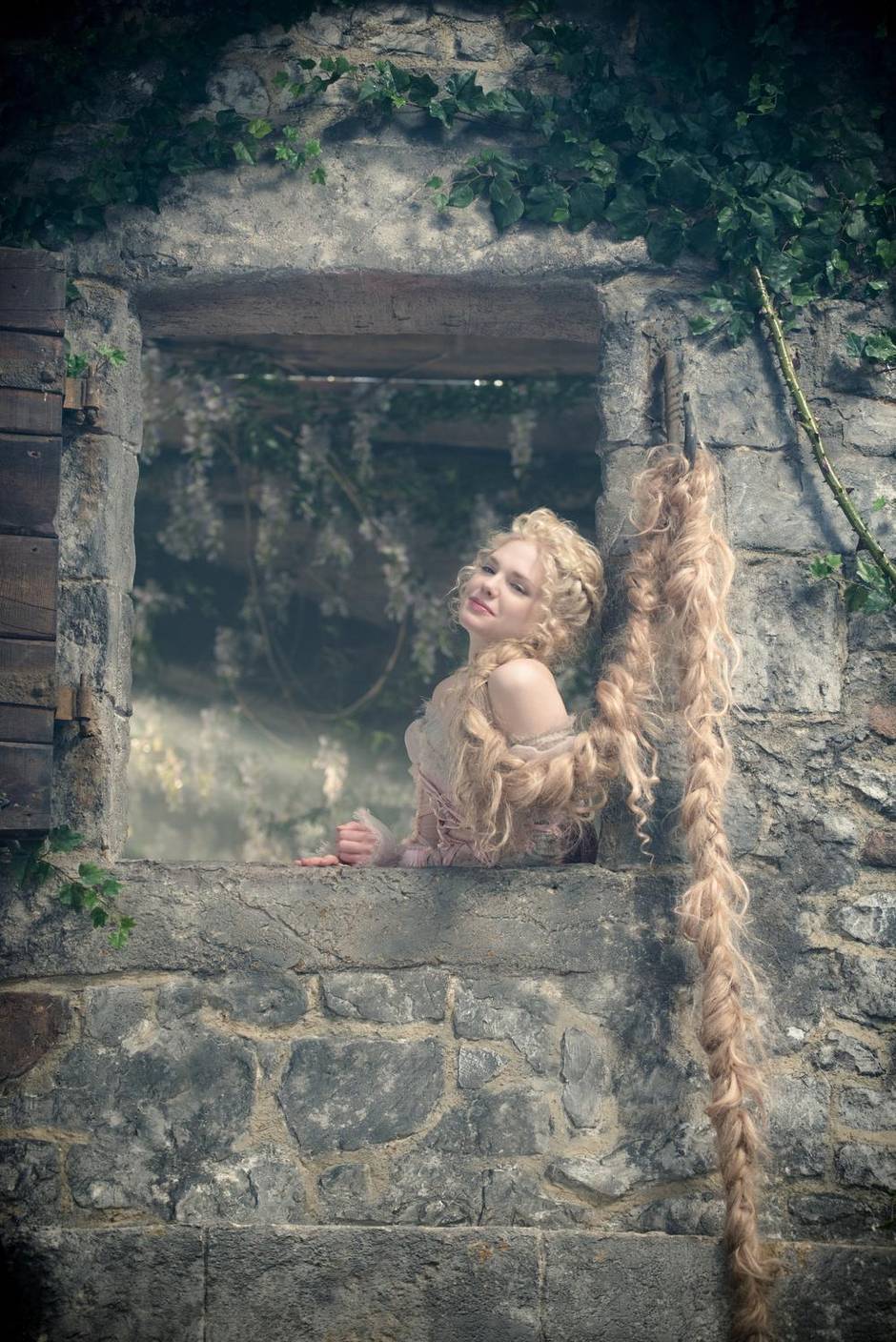 MacKenzie Mauzy stars as Rapunzel in Into the Woods.

Rapunzel, who is trapped in a doorless tower, wears a delicate, blush-pink gown with raw edges of frayed chiffon and tulle, wound in a bodice of vine-like lacings which reinforce the idea of her bondage. Elsewhere, even after applying fine handwork details such as shirred sleeves and smocked necklines, the costumes are often worn and distressed. “I used a lot of breakdown,” Atwood recalls. “It gives a more interesting patina to the costume and also to the idea that they’d been wearing their clothes for a long, long time.”

There’s also wit in the costumes of the campy and imperious Stepmother (Christina Baranski) and Stepsisters (Lucy Punch and Tammy Blanchard) of Cinderella’s era. “I thought the campiness of the 18th century, on a good day, you can’t beat! It’s pretty out there, so that’s a good setting for Cinderella.” The villainous trio are festooned in curls, ribbons, bows and lace in what could be called Early Bordello, like over-the-top saloon madams out of 1950s Westerns. “That must have come out from [Gunsmoke’s] Miss Kitty or something in my youth!” Atwood says. “It’s almost like farcical, so you can go to that place more easily than with some of the other moments in the film.” Similarly, the two princes (Chris Pine and Billy Magnussen) deliver their rousing duet Agony as glam-rock versions of the 18th-century heartthrobs (in snug velvet and leather breeches, respectively). 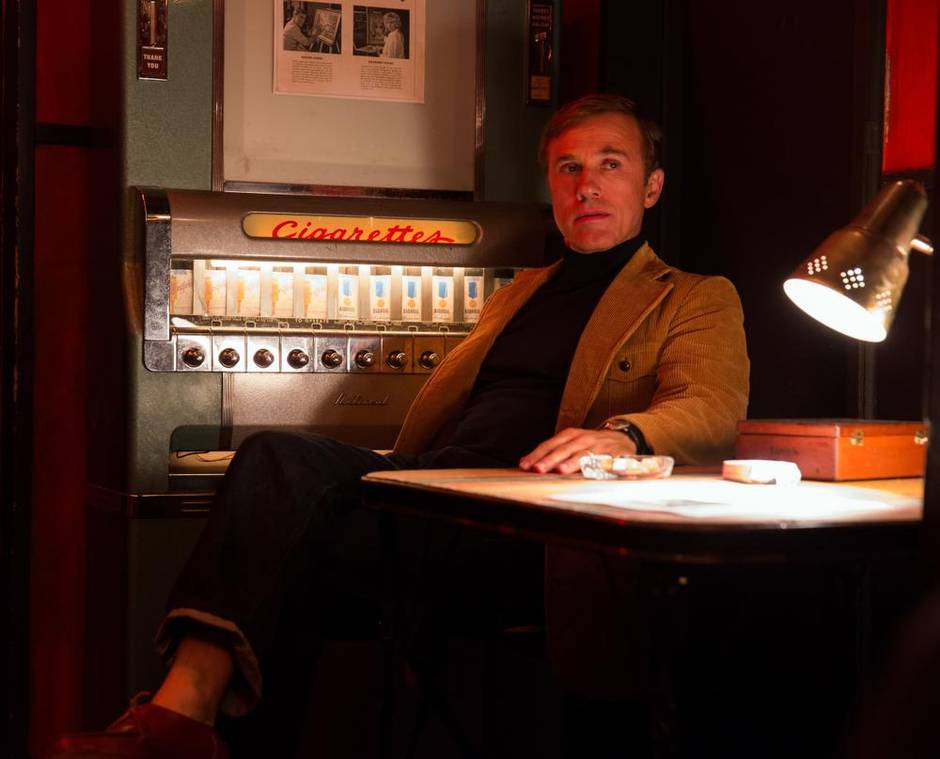 There is as much deliberation at work in the 1950s period piece Big Eyes, but it’s more subtle since it is, even for a Burton film, firmly rooted in reality. The film stars Amy Adams and Christoph Waltz as Margaret and Walter Keane, the couple behind the kitschy, wide-eyed, urchin-art phenomenon of the late 1950s. “It’s a certain time and place in America; it wasn’t an accident that the colours look very 1950s and 1960s,” Atwood says, “those slightly greyed, saturated colours of the period. And I wanted the blocks of colours in the costumes to fit into the world of the film.”

The bright turquoise, red and blue of cars and furniture in the art direction relate to the mid-century design period of the film, but also to Keane’s art. “The materials she used were reflective of that colour scheme – some of hers were darker versions of those colours, in the early years.”

“She was very generous,” Atwood adds of Keane, now 87, who has a cameo in the film (she sits on a park bench behind Waltz and Adams as they paint plein air). “She shared her research and insight with the writers early on. And they were in the press a lot as a couple, so there was a lot of photo-journalistic research of them that I drew from, but I didn’t exactly duplicate anything from those, except the feeling of her clothing.” 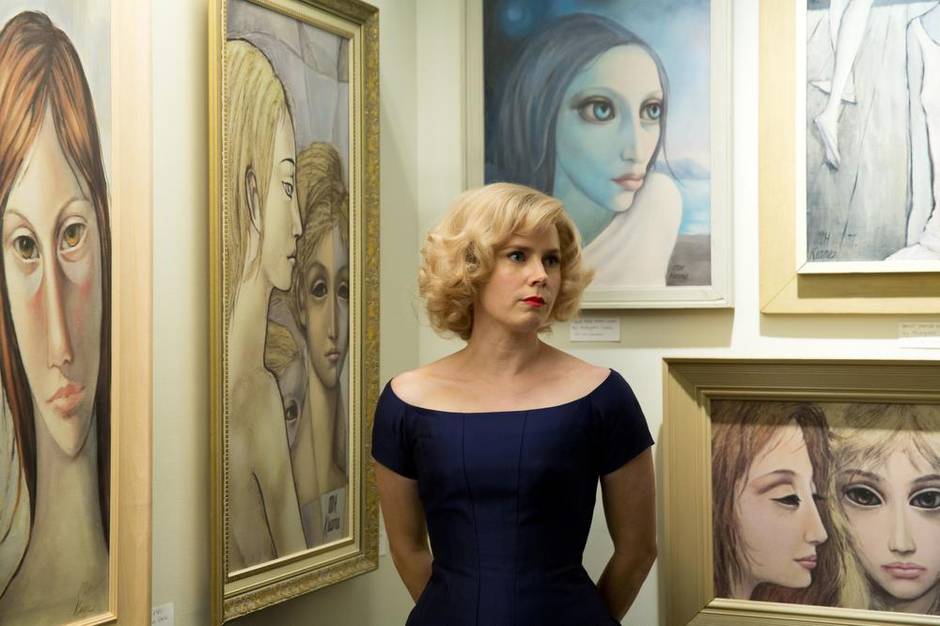 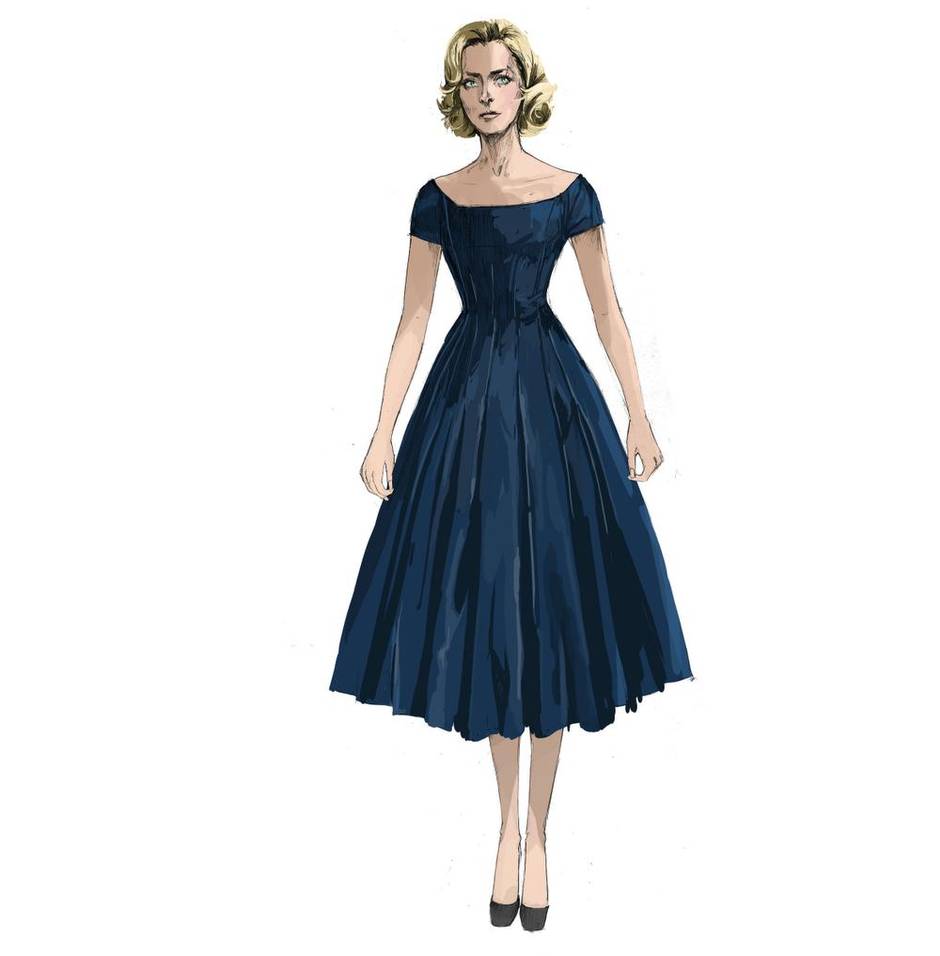 Krysten Ritter, who plays Keane’s boho friend DeeAnn, is Beatnik-inflected in a dark scoop-necked dress and ballerina flats, whereas Keane (Adams) is more prim and feminine – almost girlish. She dressed like a typical woman in the 1950s – in soft-shouldered off-the-rack dresses. The Keanes were artists living at the edge of San Francisco bohemia but not part of it – and rather square. “They were chic without self-awareness, which is what I liked about it. That was kind of fresh for a change.”

In scenes of Keane working on her paintings, the costumes are plain, comfortable shirts, capri pants and a pair of Bernardo sandals. The flat, thin-strapped sandals were outrageously popular and often spotted in off-screen casual photos of stars such as Sandra Dee and Marilyn Monroe. “It’s what people wore – it’s the real clothes, not the camera clothes.” As is the terry-cloth polo Walter wears on their Hawaiian honeymoon. “That was a real piece,” Atwood says. “Most of the clothes I made [from scratch], but it’s peppered with some real stuff, which I think really helps make it feel period.” That’s not to say there aren’t a few moments emphasized through more stylized costume. In one key scene, Keane’s teenage daughter, the frequent model in her early paintings, wears a childlike blue dress with puffed sleeves to intentionally recall one of the most famous and ubiquitous “big eyes” images.