Before we bid adieu to celebrities and streetcar closures and Netflix scandals for another year, The Globe and Mail’s film festival team presents the best, worst and weirdest moments of TIFF 2019.

Best Excuse: In the Q&A at the world premiere of the political satire The Barefoot Emperor, filmmaker Jessica Woodworth explained why she was presenting the movie without co-director Peter Brosens. “We have two girls. School just started. And there was just no chance he would come and leave the woman at home!”

Best, But Most Exclusive, Raconteur: Jane Fonda jetted into town for a private fireside chat about her life and career at the Hotel X. She’s a L’Oreal Paris spokeswoman and the company is a major TIFF sponsor, so how about next year organizers put this event on the official schedule and sell tickets?

Best Technicolor Dreamcoat: Jennifer Lopez and Renee Zellweger stole most of the red-carpet attention, but it was extremely hard to miss the sparkly jacket Michael B. Jordan sported to the premiere of Just Mercy, and which the actor continued to don throughout the night, even arriving at the film’s Distillery District after-party as if it was superglued to him. It was a piece of clothing worth being blinded by.

Worst Mixed Message: In what organizers labelled an effort to go green, TIFF decided to not print out screening schedule booklets for the public this year. Fair enough, but then why did TIFF partner with Spinach Cannabis to give away lens-less “High Definition” (get it?) plastic glasses to all Midnight Madness attendees? The useless swag was the definition of wasteful.

Best Short Story: Fans sometimes pay more than $100 to snag a seat to the studio galas – if not through official TIFF channels, then certainly on ticket-resale sites – so it’s heartening to see the reception that Toronto audiences often give films which don’t have big production or promotional budgets. On Tuesday night, a sold-out crowd packed the Scotiabank Cinema 14 for a screening of Short Cuts Program 8, a collection of seven shorts which included Canadian filmmaker Carol Nguyen’s No Crying at the Dinner Table. There are no small films. Only short ones.

Worst Speech: Just before the world premiere of his Natalie Portman astronaut psychodrama, Lucy in the Sky, unspooled at the Princess of Wales Theatre on Wednesday, director Noah Hawley told the audience: “We work just as hard on the bad ones as we work on the good ones. And we don’t know, until they come out – like, which one is it?” They laughed appreciatively. Over the ensuing two hours, they realized he wasn’t kidding.

Weirdest Promotion: On the first Saturday afternoon of TIFF, Twitter invited hundreds of women in media and marketing to the Assembly Chef’s Food Hall on Richmond Street West for drinks, snacks and a 20-minute panel discussion about female empowerment with the stars of Hustlers: Jennifer Lopez, Constance Wu, Lili Reinhart and Keke Palmer. The cheers from the Instagramming crowd were almost enough to drown out Twitter’s reputation as a toxic garbage dump. (Just kidding: of course they weren’t!)

Best Reminder: On Sunday at a Directors Guild of Canada/CBC event, I moderated a panel of production designers that included Craig Lathrop, who worked with director Robert Eggers on both The Witch and The Lighthouse. The latter film is set on a remote island in the 1890s, and Lathrop spun out a story about how he had to make a cast of a particular rock in Nova Scotia, and then put the cast on a container ship to England, but the container never arrived, so he had to have someone break the mould into thirds and transport it by plane in hockey bags, and then he recast the rock in England, where they had to be because Eggers needed trained seagulls, and though training wild animals is now illegal, there are still a half-dozen already-trained seagulls films can use, but they live in England. It reminded me that every film at TIFF was made by a crew of dedicated, educated professionals who will spend days sourcing period forks for a half-second shot when someone opens a drawer, all to add verisimilitude that we, the audience, may feel only unconsciously, but will somehow enhance our experience.

Most Demanding Viewing: A 3½-hour subtitled memoir in which the images are only elliptically related to the text might not be everybody’s cup of tea, but Thomas Heise’s Heimat is a Space in Time was the most invigorating viewing I experienced during TIFF 2019. The German director himself reads family diaries, letters and resumes, from the First World War to the present, while filming old photos and footage of contemporary Germany. So, for example, agonizing letters between a dedicated Eastern European communist and her West German lover are heard as the screen shows a contemporary station with passengers pounding the stairs and trains running into the railyard. The viewer is asked to continually assess why she is seeing what she is seeing while, even through subtitles, the fragmentary narrative remains as engrossing as an interrupted soap opera. (After yards of letters, the Ossi abandons the Wessi and some other man turns out to be Heise’s father.)

Most Infuriating Imagery: Well, we must be in Paris because that’s the Eiffel Tower glimpsed through the window of Rosamund Pike’s pretty little Latin Quarter garret. That geographically dubious scene occurs early in the Marie Curie biopic Radioactive and sets the tone for the overwrought movie, starring Pike as the scientist who discovered radiation. A few days of press screenings later, it was insult-to-injury time when Tim Roth’s character in The Song of Names follows a quest for a lost friend to New York and lies awake in a hotel room where the Manhattan skyline glitters outside his uncurtained window. If audiences are this challenged, perhaps a few onscreen titles could help establish locales.

Best Use of Canrock: “You stir my soul and whet my hunger and weave that spell that pulls me under.” Is there a prize for the best use of 1980s Canrock in a feature film by a first-time director? If so, it goes to Nicole Dorsey for her glorious use of Gowan’s Moonlight Desires in her Newfoundland-set coming-of-age drama Black Conflux. No release date yet for the film, but when that happens so too does the much-needed Gowan revival.

Weirdest Interview: As a big fan of the sports documentarian Gabe Polsky, I looked forward to speaking with him and Steve Warshaw, the subject of the hockey doc Red Penguins. The interview turned surreal when the likeable but evasive Warshaw (a scampish hockey marketing man) hedged on the answers to my questions. Director Polsky took over the interview: “Come on, Steve, be honest,” he prodded Warshaw. “Tell him the truth.” Over the course of 30 minutes, Polsky stepped in when Warshaw lost focus, while I sat back and watched a consummate interviewer at work. 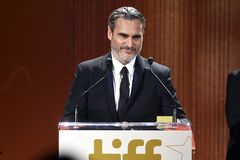 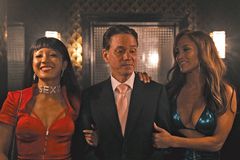 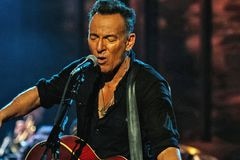 Follow Barry Hertz, Brad Wheeler, Kate Taylor, Simon Houpt, Johanna Schneller and Nathalie Atkinson on Twitter @hertzbarry @BWheelerglobe @thatkatetaylor @simonhoupt @JoSchneller @NathAt
Report an error Editorial code of conduct
Due to technical reasons, we have temporarily removed commenting from our articles. We hope to have this fixed soon. Thank you for your patience. If you are looking to give feedback on our new site, please send it along to feedback@globeandmail.com. If you want to write a letter to the editor, please forward to letters@globeandmail.com.
Comments